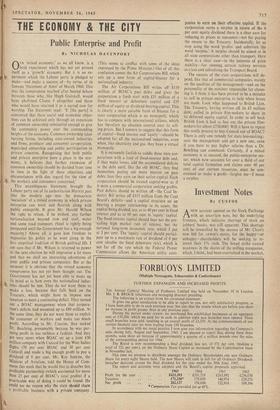 OUR 'mixed economy,' as we all know, is a bold experiment which has not yet proved itself as a 'growth' economy. But it is an ex- , periment which the Labour party is pledged to make—and make a success of—by virtue of its famous 'Statement of Aims' of March 1960. This was the compromise reached after heated debate between those who, like Hugh Gaitskell, would have abolished Clause 4 altogether and those who would have retained it as a sacred cow for worship. The Statement read: 'It [the party] is convinced that these social and economic objec- tives can be achieved only through an expansion of common ownership substantial enough to give the community power over the commanding heights of the economy. Common ownership takes varying forms, including state-owned industries and firms, producer and consumer co-operation, municipal ownership and public participation in private concerns. Recognising that both public and private enterprise have a place in the eco- nomy, it believes that further extension of common ownership should be decided from time to time in the light of these objectives and circumstances with due regard for the view of the workers and consumers concerned.'

This unambiguous Statement brought the Labour party out of its authoritarian Marxist past into the modern age—into the democratic 'socialism' of a mixed economy in which private enterprise can work and flourish along with Public enterprise. It gave Mr. Harold Wilson the right to refuse, if he wished, any further nationalisation beyond iron and steel, water and some road transport. (Steel is rightly being postponed until the Government has a big enough majority.) Above all, it gave him freedom to improvise his policy as he went along in the best empirical tradition of British political life. I am sure that if Mr. Wilson is returned to power at the next election he will improvise a lot more and that we shall see interesting adventures of Joint public and private companies. But at the moment it is obvious that the mixed economy compromise has not yet been thought out. The Government has not yet been able to make up its mind as to how even the nationalised indus- tries should be run. They do not want them to make a loss, because that falls back on the Treasury, which might have to impose new taxation to meet a continuing deficit. They turned out a BOAC management when that corpora- tion's deficits had mounted up to £80 million. At the same time, they do not want them to exploit the consumer or workers and make too much Profit. According to Mr. Cousins, they sacked Dr. Beeching, presumably because he was pur- suing profit in too ruthless a fashion. And they got very upset when BC1AC set up a joint £30 million company with Cunard for the West Indies flights (70 per cent BOAC and 30 per cent Cunard) and made a big enough profit to pay a dividend of 6 per cent. Mr. Roy Jenkins, the

Minister of Aviation, told the House of Com- mons this week that he would like to dissolve this

Profitable partnership (which accounted for more than 25 per cent of BOAC's total profits) if a practicable way of doing it could be found. He could see no reason why the state should share a Profitable business with a private company. (This seems to conflict with some of the ideas expressed by the Prime Minister.) Out of all this confusion comes the Air Corporations Bill, which sets up a new form of capital-finance for a nationalised industry.

The Air Corporations Bill writes off £110 million of BOAC's 'past debts and gives the corporation a fresh start with £31 million of a fixed interest or debenture capital and £35 million of equity or dividend-bearing capital. This is clearly a more suitable form of finance for a state corporation which is no monopoly, which has to compete with international airlines, which has therefore no absolute control over its sell- ing prices. But I venture to suggest that this form of capital—fixed interest and `equity'—should be adopted for all the nationalised industries, even when, like electricity and gas, they have a virtual monopoly.

It is extremely foolish to saddle these state cor- porations with a load of fixed-interest debt and, if they make losses, add the accumulated deficits to the debt until, like the old BOAC, they find themselves paying out more interest on past debts than they earn on their active capital. Each corporation should be treated capital-wise as if it were a commercial corporation seeking profits. Past deficits should be written off—the Coal In- dustry Bill writes off £415 million from the Coal Board's deficits—and a capital structure set up bearing a proper relationship to its assets, the capital being divided, say, as to 40 per cent in fixed interest and as to 60 per cent in 'equity' capital. The fixed-interest capital should bear not the pre- - vailing high market rate of interest, but the notional long-term economic rate, which I put at 3 per cent. The 'equity' capital should partici- pate up to a maximum rate of dividend of 6 per cent (double the fixed debenture rate), which is not far off the rate which the Federal Power Commission allows the American utility corn-

panies to earn on their effective capital. If the corporation earns a surplus in excess of the 6 per cent equity dividend there is a clear case for reducing its prices to consumer—not for paying the excess to the Treasury. Incidentally, let us stop using the word 'profits' and substitute the word 'surplus.' A surplus should be aimed at in all state corporations other than transport. Here there is a clear case—in the interests of price stability—for running certain railway services at a loss and subsidising the Transport Board.

The success of the state corporations will de- pend, like that of commercial companies, mainly on the qualities of the management—and on the personality of the minister responsible for choos- ing it. I think it has been proved to be a mistake to call in private enterprise to help when losses are made. Look what happened to British Lion. The Treasury, having written off its £3 million debt, called in private film-makers to share in its deferred equity capital. In order to sell back British Lion it had to buy out the private film- makers for about £750,000! Will it have to repeat this costly process to buy Cunard out of BOAC? There is only one remedy for state loss-making: sack the management and get a new one, even if you have to pay higher salaries than a Dr. Beeching can command. Certainly, if a mixed economy is to succeed, the public-enterprise sec- tor, which now accounts for over a third of our total capital formation and claims over 40 per cent of our current resources, must be con- strained to make a profit—forgive me-1 mean a surplus.