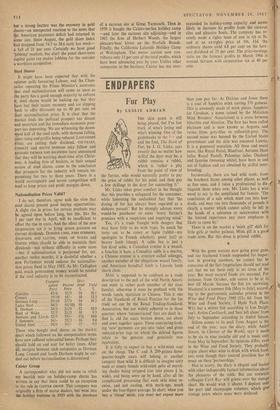 Mr. Links takes great comfort in the thought that this provides a safeguard for the consumer, while lamenting the undoubted fact that 'the dyeing of fur has always been regarded as a dubious pursuit.' But he strongly advises every would-be purchaser to enter 'every furrier's premises with a suspicious and inquiring mind.'

Yes, it's a trade fraught with dangers that may have little to do with traps. So much fur turns out to be coney or lapin (rabbit—my apologies to French scholars), genet (cat) or beaver lamb (sheep). A sable fox is just a fox dyed sable, a Canadian ermine is a weasel, a foxaline is hare, a Canadian sable is a marten, a Chinese ermine is a creature called solongoi, another member of the ubiquitous weasel family, and American broadtail lamb is Lincoln lamb shorn close.

Mink is supposed to be confined as a trade description to the pelt of the wild North Ameri- can mink (a rather posh member of the stoat family), otherwise it must be prefixed with the words ranch, mutation or Chinese. This is one of the Standards of Retail Practice for the fur trade set out by the Retail Trading-Standards Association, but not widely adhered to in those quarters where 'reconstructed' furs are dealt in: that is, old fur coats broken down, cut about and sewn together again. These convincing-look- ing 'new' garments are put into 'sales' and given reduced-price tags on which the deleted figures relate to the genuine and genuinely new equivalent.

It is folly to expect to buy a wild-mink coat on the cheap. The C and A 299-guinea three- quarter-length coats will belong to another category than wild. It is difficult to imagine sixty male or ninety female wild-mink pelts of match- ing shades being stripped (cut into pieces in. wide), and being sewn up by hand, after all the complicated processing that each skin must re- ceive, and not costing, with mark-ups, much under the four-figure average. In short, when you buy a 'cheap' mink, you must not expect more

than you pay for. At Dickins and Jones there is a coat of Sapphire mink costing 376 guineas. This is avowedly made of mink pieces. Sapphire (or Cerulean, a name coined by the Mutation Mink Breeders' Association) is a cross between Silverblu and Aleutian. The first has been called platinum and is now known as Argenta and varies from grey-blue to yellowish-grey. The second name was banned by the United States government and the skin was renamed Lutetia. It is a gunmetal mutation. All these and many more, like Royal Pastel, Bluefrost, Autumn Haze (alias Royal Pastel), Palomino (alias Diadem) and Jasmine (meaning white), have been in and out of fashion and are obtained by skilful inter- breeding.

Incidentally, there are bad wild mink, from the Southern States among other places, as well as fine ones, and it takes a professional to dis- tinguish them when new. Mr. Links has a wise word to say to the uninitiated fur fancier. 'The conclusion of a sale which must run into hun- dreds, and may run into thousands, of pounds is clearly a matter which cannot safely be left in the hands of a salesman or saleswoman with the limited experience any store employee is likely to come by.'

There is on the market a 'mink gill' shift for little girls at twelve guineas. Mink gill is a good trade term. But this dress is printed rabbit.

With the game seasons now going great guns, and our feathered friends suspended for inspec- tion in growing numbers, we cannot but be conscious of the fact (vegetarians should not read on) that we eat them only at set times of the year. But most natural foods are seasonal. For instance, from October, sole ceases to be at its best till March, because the fish are spawning. Mackerel is a summer fish (May to July), accord-;( ing to the gastronomic calendar printed in the Wine and Food Diary 1966 (13s. 6d. from the Wine and Food Society, 2 Hyde Park Place, W1), but a winter fish according to Len Deigh- ton's Action Cookbook, and 'best left alone' from July to September according to Andre Simon.

Stilton comes to its peak from August to the end of the year, says the diary, while Andre Simon, in Cheeses of the World, says it needs to be six to nine months old and is made only from May to September. So opinions differ, even in the Wine and Food Society. They probably argue about what wine to drink with which food, too, even though their revered president has an essay on these 'partnerships.' Not to worry, the diary is elegant and loaded with other indisputably factual information about the pleasures of the table. But our erstwhile colleague Cyril Ray will grieve over the vintage chart. He would wish it absent. I deplore onlY the port and champagne columns, which give vintage years where none were declared.