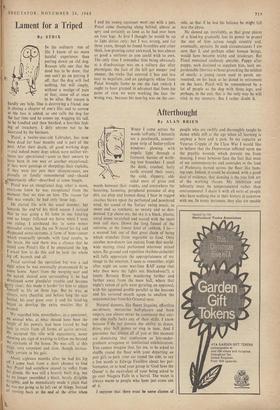 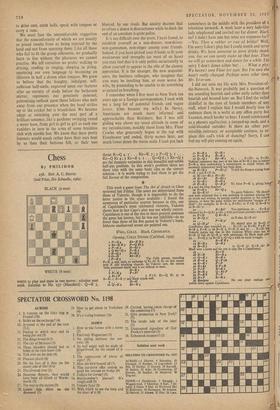 WHEN I come across the words 'self-pity,' I instantly see a patchwork, counter- pane strip of butter-yellow windows glowing with angelic light through a fretwork barrier of writh- ing tree branches'. I smell the dank, crushed, leafy earth around their roots, the cold, slippery, old- salad mess of grass and weeds between their trunks, and everywhere the hovering, haunting, peripheral presence of dog dirt, cat plop and human dung. I hear in ragged swathes blown upon the perfumed and powdered wind, the sound of the 'forties' swing music, so sweet and so synthetic, so sweaty and so deo- dorised. Up above me, the sky is a black, plastic, astral dome scratched and scored with the spots men call stars. Down the long funnel of the universe, at the lowest level of rubbish, I lie— a severed link out of that great chain of being which stretches from vegetable to God. Only another non-dancer (an outcast from that world- wide mating ritual performed wherever mixed sexes, flat ground and repetitive rhythms coincide) will fully appreciate the appropriateness of my image to the emotion, I seem to remember, night after night on some war-time RAF camp (but why then were the lights not blacked-out?), a lonely Byronic Brien wandering farther and farther away from the mess hall, where that night's ration of girls were gyrating on approval, with his agonised profile parallel to the heavens and his tortured mouth agape to swallow the occasional tear from his Oriental eyes.

Natural dancers, like fluent linguists, effortless car-drivers, instinctive ball-players and born singers, can almost never be convinced that any- one else really lacks any of their skills. I know because I do not possess the ability to dance, drive, play ball games or sing in tune. And I guarantee that almost all of you at this moment are dismissing that confession as late-under- graduate arrogance or intellectual exhibitionism. You cannot imagine that, for me, to be asked to shuffle round the floor with your departing au pair girl, to park your car round the side, to say a few words to Edwige Feuillere about her per- formance, or to lead your group in 'God Save the Queen' is the equivalent of your being asked to go over Niagara Falls in a barrel. The water is always warm to people who have just come out of it.

I suppose that there must be some classes of people who are swiftly and thoroughly taught to dance while still at the age when all learning is anyway a bore and a pain. In my capacity as Veteran Cripple of the Class War I would like to believe that the Depression inflicted upon me the psychic wounds which prevent me from dancing. I must however face the fact that most of my contemporaries and comrades in the land of Proletaria moved across the floor like hum- ing tops. Indeed, it could be claimed, with a good deal of evidence, that dancing is the true folk art of the working classes. My inhibition and infirmity must be temperamental rather than environmental. I share it with all sorts of people who have nothing else in their history in common with me. In many instances, they also are unable

to drive cars, catch balls, speak with tongues or carry a tune.

We must face the uncomfortable suggestion that the nonconformity of which we are usually so proud results from us being rejected by the herd and not from spurning them. Like all those who fail to fit the group silhouette, we gradually learn to live without the pleasures we cannot practise. We tell ourselves we prefer walking to driving, reading to singing, sleeping to jiving, mastering our own language to becoming an illiterate in half a dozen alien tongues. We grow to believe that the haughty, indulgent, self- sufficient half-smile, engraved upon our features after an eternity of study before the bathroom mirror, represents our genuinely paternal, patronising outlook upon those fellows who melt away from our presence when the band strikes up or the cricket bat is brandished. We become adept at switching over the next part of a brilliant sentence, like'a gardener swinging round a water hose, from girl to girl to girl as each one vanishes in turn in the arms of some brainless slob with nimble feet. We know that these pretty listeners would much rather have their ears bent by us than their bottoms felt, or their toes blunted, by our rivals. But society decrees that to refuse a dance is discourteous while to duck the end of an anecdote is quite polite.

It is not difficult over the years, I have found, to establish yourself as a non-dancer, non-driver, non-gamesman, non-singer among your friends. Indeed, if you have picked your friends to fit your weaknesses and strengths (as most of us have) you may feel that it is only politic occasionally to allow yourself to appear in the role of the clumsy apprentice. It is the stranger, the new acquaint- ance, the business colleague, who imagines that you must be insulting him, or even worse his wife, by pretending to be unable to do something as natural as breathing.

I remember when I first went to New York ten years ago as a foreign correspondent, I took with me a long list of potential friends and vague lovers. (One became my wife.) In theory, Americans are much more informal and approachable than Britishers. But I was still gliding way above my usual altitude in some of my introductions, notably those from Mrs. Fleur Cowles who generously began at the top with Eisenhower and ended, thirty names later, not much lower down the status scale. I took pot luck

somewhere in the middle with the president of a television network. A week later a very lady-like lady telephoned and invited me for dinner. Black tie? I didn't have one but what are expenses for? -Yes. Then a rubber or two of bridge? Well, I'm sorry I don't play but I could watch and serve drinks. We have someone to serve drinks thank you, but we can surely make up that four. Then we will go somewhere and dance for a while. I'm sorry I don't dance either but . . . What a pity. We haven't seen Fleur for ages. But I'm sure she hasn't really changed. Perhaps some other time, Mr. Er-er-utn.

I did not miss my life with Mrs. President-of- the-Network. It was probably just a question of my sounding boorish and sober early rather than boorish and boozed later on. But I find the veiled disbelief in the eyes of female members of any staff, when I explain that I would dearly love to embrace them in a waltz at any office party but I cannot, much harder to bear. I stand condemned as a phoney egalitarian, a jumped-up snob, and a cold-blooded outsider. Is there no other per- missible intimacy, or acceptable cosiness, to re- place this cad's trick of dancing? Sorry, I can feel my self-pity coming on again.