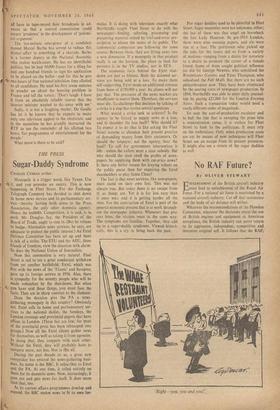 Monopoly is a trigger word, like Tynan. Use it, and you provoke an outcry. This is now happening in Fleet Street. For the Exchange Telegraph Company has decided to shut down its home news service and its parliamentary ser- vice--thereby leaving both areas to the Press Association, the only other domestic agency. Hence the hubbith. Competition, it is said, is in Peril. Mr. Douglas Jay, the President of the Board of Trade, ought to step in. (But he refuses to budge. Alternative news services, he says, are adequate to protect the public interest.) An Extel Defence Committee has been set up and there is talk of a strike. The ETU and the AEU, those friends of freedom, view the situation with alarm. So does the National Union of Journalists.

Now this commotion is very natural. Fleet Street is sad to See a great combatant withdraw from yet another battlefield; Extel, which was first with the news of the 'Titanic' and Sarajevo, gave up its foreign service in 1956. Also, there is sympathy for the seventy people who will be made redundant by the shut-down. But when

41,' You have said these things, you must face the facts. They are in sharp contrast to the clamour.

Does the decision give the PA a news- gathering monopoly in this country? Obviously not. Extel sells its home and parliamentary ser- vices to the national dailies, the Sundays, the London evenings and provincial papers that have offices in London. (These last are few; for most of the provincial press has been telescoped into groups.) Now all the Extel clients gather news for themselves, as well as taking it from agencies. In doing that, they compete with each other. Without the Extel, they will probably have to compete more, not less. Nor is tits all.

During the past decade or so, a great new competitor has entered the news-gathering busi- ness. Its name is the BBC. It subscribes to Extel and the PA. At one time, it relied entirely on them for its domestic news. Now, increasingly, it goes out and gets news for itself. It does more than that, too.

As its current affairs programmes develop and expand, the BBC makes news to fit its own for- mulas, It is doing with television exactly what Northcliffe taught Fleet Street to do with the newspaper—finding, selecting, processing and presenting material mixed by trial-and-error pre- scription to please the tastes of its public. The corhmercial companies are following the same course. Between them, they are lifting news into a new dimension. If a monopoly in that product really is on the horizon, the place to look for portents is in the TV studios, not in EC4.

The economic facts behind the Extel shut- down are just as blatant. Both the doomed ser- vices are being sold at a loss. To make them self-supporting, Extel needs an additional revenue from them of £150,000 a year. Its clients will not pay that. The pressures of the news market• are insufficient to coerce them. Therefore, the services must die. To challenge that decision by talking of a strike is a step that invites several questions.

What would a strike seek to achieve? Is the agency to be forced to supply news at a loss, and to shoulder the loss itself? Why should it? To expect it to do that is like asking the Fleet Street taverns to abandon their present practice of demanding money from their customers. Or should the taxpayer, not the agency, bear the load? To call for government intervention is idle--unless the callers want a state subsidy. But why should the state swell the profits of news- papers by supplying them with cut-price news? Is there any better reason for levying tribute on the public purse than for requiring the Extel shareholders to play Santa Claus?

The fact is that news services, like newspapers, must stand on their own feet. This was not always true. But today there is no escape from it, as things are. Yet it is far less easy than it once was; and it is getting harder all the time. For the contraction of Extel is part of the general economic process that is at work through- out the newspaper industry. Whenever that pro- cess bites, the victims react in the same way. The symptoms are familiar. Together, they add up to a sugar-daddy syndrome. Viewed histori- cally, this is a cry to bring back the past.

'Right--you, you and you!' For sugar daddies used'to be plentiful in Fleet Street. Sugar mummies were not unknown, either; the last of these was that angel on horseback the late Lady Houston. In pre-1914 London, there were nine evening papers, and six were run at a loss. The gentlemen who picked up the tabs for the losers did so from a variety of motives—ranging from a desire for notoriety to a desire to promote the career of a female friend. Some of them sought political influence (as did Sir George Newnes, who subsidised the Westminster Gazette, and Yates Thompson, who subsidised the Pall Mall). But there are no such philanthropists now. They have been eliminated by the soaring costs of newspaper production. In 1894, Northcliffe was able to enter daily journal- ism by paying £25,000 for the London Evening News. Such a transaction today would need a vastly different order of magnitude.

To stop the cost-of-production escalator and to halt the tide that is sweeping the press into a concentration camp. it is useless for Fleet Street to look to the politicians. It must rely on the technicians. Only when production costs are cut by means of new techniques will Fleet Street see an escape from its present pressures. It might also see a return of the sugar daddies as well.