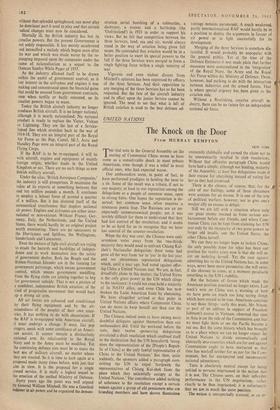 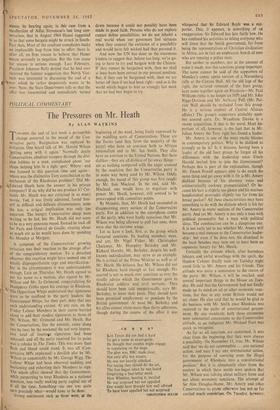 The Knock on the Door

THE tied vote in the General Assembly on the seating of Communist China seems to have come as a considerable shock to most private Americans, even though it was a relief to most official ones, who had expected worse.

Our ambassadors seem, in point of fact, to have performed prodigies in holding the issue to a tie. Some of the result was a •tribute, if not to our majesty, at least to our reputation among the delegations as a people of common sense, open to strong hints. One hopes the reputation is de- served; but common sense often requires a strenuous poetic leap. The Russians are an un- expectedly commonsensical people; yet it was terribly difficult for them to understand that they had Jost control of the revolution; and it seems to be as hard for us to recognise that we have lost control of the counter-revolution.

When •the day was over, the Chinese were only seventeen votes away from the two-thirds majority they would need to unfrock Chiang Kai- shek's Nationalist delegation; three votes had gone all the way from `no' to 'yes' in the last year and ten abstentions represented delegations which, until a year ago, had voted against offer- ing China a United Nations seat. We are, in fact, dreadfully alone in this matter; the United States is the only great power in the UN which clings to the resistance; it could not even hold a majority of its NATO allies, and even Chile has now broken the Latin American front by abstaining. We have altogether arrived at that point in United Nations affairs where Communist China can do more to keep herself out than can the United Nations.

The Chinese indeed seem to have swung more doubtful delegates against themselves than our ambassadors did. Until the weekend before the vote, their twelve sponsoring delegations circulated a draft resolution which confined itself to the declaration that the UN henceforth 'recog- 'vises the representatives of the [People's Repub- lic of China] as the only lawful representative of China to the United Nations.' But then, quite suddenly,,the sponsors added a paragraph com- mitting the UN to expel 'forthwith the representatives of Chiang Kai-shek from the place which they unlawfully occupy at the United Nations.' The contribution added nothing of substance to the resolution except a certain Venom against a group of old pensioners who are founding members and have shown themselves

eminently clubbable and earned the claim not to be unnecessarily insulted in club resolutions. Without that offensive paragraph China would have had a simple, although not binding, majority of the Assembly; at least five delegations made it their excuse for abstaining instead of voting for her as they had promised.

There is the chance, of course, that, for the 0 sake of our feelings, some of these abstainers were anxious for an excuse. It is one of the arts of political warfare, however, not to give one's weaker ally an excuse to defect.

Still we are left with a situation where only our great enemy rescued us from serious em- harassment before our friends, and where Com- munist China can be kept from claiming her UN seat only by the incapacity of two great powers to forget old insults, one the United States, the other China herself.

We can then no longer hope to isolate China; the only possible hope for what has been our position for twelve years now is that she will in- sist on isolating herself. Yet the case against admitting.her to the United Nations has, in some ways, never been more persuasive; she will enter, if she chooses to come, at a moment peculiarly unsettling to the UN's stability.

But the balance of forces which made the American position practical no longer exists. Last week's vote on China was a warning of how we have gone on much too long saying things which have ceased to be true. Americans continue to say those things: early this week, Mr. Nixon. as part of an address in support of President Johnson's course in Vietnam, observed that time in Asia is on the side of the Communists and that we must fight them or see the Pacific become a red sea. But the same history which has brought us to a place where we can no longer expect the United Nations to divide automatically and 'abstractly into countries which are for and against Communism ought to have instructed us that time has worked neither for u$ nor for the Com- munists, but for unexpected and inconvenient national adventurers.

Time is absolutely neutral except for being unkind to persons imprisoned in the notion that it is not. The Chinese seem, on their inflexible performance in the UN negotiations, rather clearly to be thus imprisoned; it is unfortunate that we are in much the same position.

The nation is unexpectedly aroused, as an in- stance, by hearing again, in this case from a recollection of Adlai Stevenson's last long con- versation, that in August 1964 Hanoi suggested to us that some bargain might be struck in South- East Asia. Most of the resultant complaints make an implausible leap from hint to offer; there is, after all, no firm reason to believe that Hanoi meant seriously to negotiate. But the true cause for unease is serious enough. Last February, President Johnson flatly denied that he had ever received the faintest suggestion that North Viet- nam was interested in discussing the end of a '11 war which he rather desperately wants to be over. Now, the State Department tells us that the offer was transmitted and immediately turned

down because it could not possibly have been made in good faith. Persons who do not explore cannot define possibilities; we do not inhabit a real world when our governors feel virtuous when they conceal the existence of a possibility and would have felt wicked had they pursued it.

And now the UN has done us the enormous kindess to suggest that, before too long, we're go- ing to have to try and bargain with the Chinese. If they cannot be bargained with, then we shall at least have been correct in our present position. But, if they can be bargained with, then we are better off than if we had been right—and so is the world which began to hint so strongly last week that we had best begin to try.