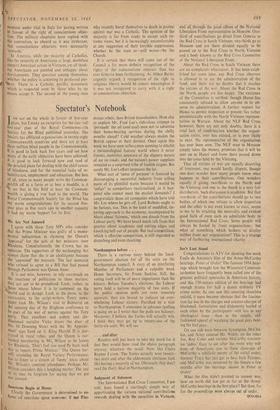 We Are Not Amused I agree with those Tory MPs

who consider that the Prime Minister was guilty of a monu- mental indiscretion in claiming the Queen's `approval' for the acts of her ministers over Rhodesia. Constitutionally the Crown has no opinions. The supporters of the no-hanging Act cannot claim that she is an abolitionist because she 'approved' the measure. The last monarch Who refused to agree to a Bill that had passed through Parliament was Queen Anne.

It is not wise; however, to rely overmuch on the reactions of politicians to these matters; they are apt to be prejudiced. Look, rather, to those whose labour it is to comment on the 'World and its doings. Look to the press, to the cartoonists, to the script-writers. Every news- Paper took Mr. Wilson's visit to Balmoral on the opening day of the Brighton conference to he part of his war of nerves against the Tory Party, That excellent and ardent and dis- illusioned socialist Vicky draws the door of No. 10 Downing Street with the 'By Appoint- ment' sign fixed . on it. King Harold II is por- trayed in royal robes, and the Queen is car- tooned murmuring to Mr; Wilson as he leaves for Rhodesia, 'Don't feel you need fly back each daY to report, Prime Minister.' The Queen her- self, attending the Royal Variety Performance, has to listen to a stream of 'funny' jokes about Mr. Wilson's constant attendance. Perhaps Mr. Wilson considers this a laughing matter. The rest of us may be forgiven for saying that we are not amused.