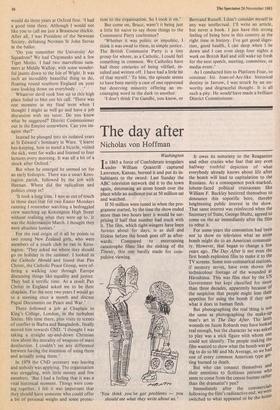 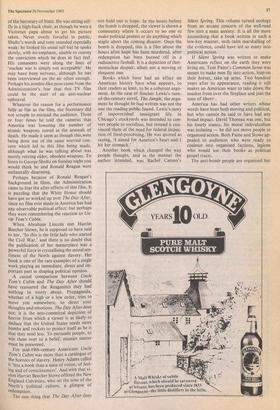 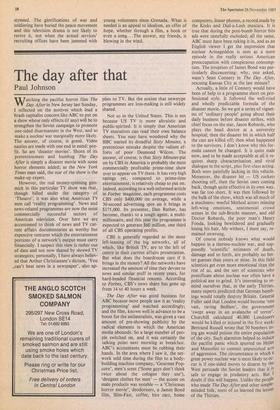 Washington T n 1863 a force of Confederate irregulars 'under William Quantrill captured Lawrence, Kansas, burned it and put its in- habitants to the sword. Last Sunday the ABC television network did it to the town again, detonating an atom bomb over the place while an audience put at 50 million sat and watched.

If 50 million were tuned in when the pro- gramme started, by the time the show ended more than two hours later it would be sur- prising if half that number had stuck with it. The film, which right-wingers have been furious about for days, is as dull and lifeless before the bomb goes off as after- wards. Compared to entertaining catastrophe films like the sinking of the Titanic, this one hardly made for com- pulsive viewing.

'You think you've got problems — you should see what they write about us.' It owes its notoriety to the Reaganites and other crazies who fear that any even halfway truthful depiction of what everybody already knows about life after the bomb will lead to capitulation to the Russians. As a consequence pock-marked, lobster-faced political crustaceans like William F. Buckley bestirred themselves to denounce this soporific bore, thereby heightening public interest in the show. That same interest was reinforced when the Secretary of State, George Shultz, agreed to come on the air immediately after the film to rebut it.

For some years the convention had been not to show on television what an atom bomb might do to an American communi- ty. However, that began to change a few years ago. The Day After is not even the first bomb explosion film to make it to the TV screens. Some non-commerical stations, if memory serves, have even shown the technicolour footage of the wounded at Hiroshima. This was film shot by the US Government but kept classified for more than three decades, apparently because of the suspicion that people might lose their appetites for using the bomb if they saw what it does to human flesh.

But photographing the real thing is not the same as photographing the make-up man's art in The Day After. The latex wounds on Jason Robards may have looked real enough, but the character he was asked to play was a stick figure with whom one could not identify. The people making the film wanted to show what the bomb was go- ing to do to Mr and Ms Average, so we had one of every common American type get- ting burned to death.

But who can connect themselves and their emotions to fictitious persons who seem to come from the census bureau rather than the dramatist's pen?

Immediately after the commercials following the film's radioactive end, we were switched to what appeared to be the home of the Secretary of State. He was sitting stif- fly in a high-back chair, as though he were a Victorian papa about to get his picture taken. Never overly forceful in public, Shultz's words and tone sounded especially weak: he looked his usual self but he spoke slowly, with no emphasis, unable to convey the conviction which he does in fact feel. His comments were along the lines of `nuclear war is simply not acceptable'. He may have been nervous, although he has been interviewed on the air often enough. Perhaps his zombie-like pose came from the Administration's fear that this TV film could be the start of an anti-nuclear upheaval.

Whatever the reason for a performance fully as flat as the film, the Secretary did not scruple to mislead the audience. Three or four times he told the cameras that America was lowering the number of atomic weapons stored in the arsenals of death. He made it seem as though this.were being done out of the same worried con- cern which led to this film being made, although what he was talking about was merely retiring older, obsolete weapons. To listen to George Shultz on Sunday night you would think he and Ronald Reagan were unilaterally disarming.

Perhaps because of Ronald Reagan's background in films, the Administration came to fear the after-effects of this film. It is puzzling that the White House should have got so worked up over The Day After, since no film ever made in America has had any observable political effect; but perhaps they were remembering the reaction to Un- cle Tom's Cabin.

When Abraham Lincoln met Harriet Beecher Stowe, he is supposed to have said to her, `So this is the little lady who started the Civil War,' and there is no doubt that the publication of her masterpiece was a powerful force in crystallising the moral sen- timent of the North against slavery. Her book is one of the rare examples of a single work playing an immediate, direct and im- portant part in shaping political opinion.

A casual comparison between Uncle Tom's Cabin and The Day After should have reassured the Reaganites they had nothing to worry about. Propaganda, whether of a high or a low order, tries to move you somewhere, to direct your thoughts and emotions. The Day After does not: it is the non-committal depiction of horror from which a viewer is as likely to deduce that the United States needs more bombs and rockets to protect itself as he is that they need less. To persuade people, to win them over to a belief, meatier matter must be presented. For mid-19th-century Americans Uncle Tom's Cabin was more than a catalogue of the horrors of slavery. Henry Adams called it 'less a book than a state of vision, of feel- ing and of consciousness'. And with that vi- sion Harriet Beecher Stowe offered the New England Calvinists, who set the tone of the North's political culture, a glimpse of redemption. The one thing that The Day After does

not hold out is hope. In the hours before the bomb is dropped, the viewer is shown a community where it occurs to no one to make political protest or do anything which might abort the coming disaster. Once the bomb is dropped, this is a film about the hours after hope has been murdered, after redemption has been burned off in a radioactive fireball. It is a depiction of ther- monuclear despair, albeit not a moving or eloquent one.

Books which have had an effect on American history have what appears, to their readers at least, to be a coherent argu- ment. In the case of Sinclair Lewis's turn- of-the-century novel, The Jungle, the argu- ment he thought he had written was not the one the reading public found. Lewis's story of impoverished immigrant life in Chicago's stockyards was intended to con- vert people to socialism, but instead it con- vinced them of the need for federal inspec- tion of food-processing. He was quoted as saying, '1 aimed for America's heart and I hit her stomach.'

Another book which changed the way people thought, and in the manner the author intended, was Rachel Carson's

Silent Spring. This volume turned ecology from an arcane concern of the well-read few into a mass anxiety. It is all the more astonishing that a book written in such a low-key manner, such calm marshalling of the evidence, could have led so many into political action.

If Silent Spring was written to make Americans reflect on the earth they were living on, Tom Paine's Common Sense was meant to make men fly into action, leap on their horses, take up arms. Two hundred years after its appearance, reading it still makes an American want to take down the musket from over the fireplace and join the sons of libert% .

America has had other writers whose words have been both moving and political, but who cannot be said to have had any broad impact. David Thoreau was one, but his lonely stance, his moral individualism was isolating — he did not move people to organised action. Both Paine and Stowe ap- pealed to audiences who were ready to coalesce into organised factions, legions who would use their books as political gospel tracts.

The anti-bomb people are organised but

stymied. The glorifications of war and soldiering have buried the peace movement and this television drama is not likely to revive it, not when the armed services' recruiting offices have been jammed with young volunteers since Grenada. What is needed is an appeal to idealism, an offer of hope, whether through a film, a book or even a song „ . The answer, my friends, is blowing in the wind,