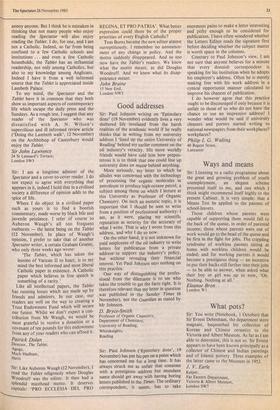 pen on a point which has concerned me for a long time. It has always struck me as unfair that someone with a prestigious address but mundane name should get away with having boring letters published in the Times. The ordinary correspondent, it seems, has to take

enormous pains to make a letter interesting and pithy enough to be considered for publication. I have often wondered whether the Letters Editor reads the signature first before deciding whether the subject matter is worth space in the columns.

Contrary to Paul Johnson's view, I am not sure that anyone believes for a minute that every donnish correspondent is speaking for his institution when he adopts his employer's address.. Often he is merely making free with his work address in a cynical opportunist manner calculated to improve his chances of publication.

I do however agree that this practice ought to be discouraged if only because it is unfair to those of us who do not have the chance to use an• impressive address! I wonder what would be said if university cleaners and porters started writing to national newspapers from their workplaces? workplaces?