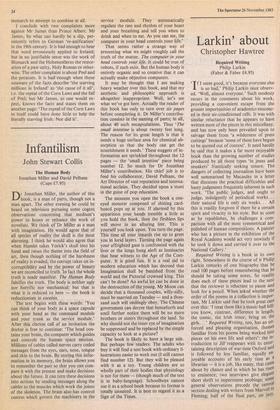 Dr Jonathan Miller, the author of this book, is a man of parts, though not a man apart. The other evening he could be heard on television pursuing some cogent, observations concerning that medium's power to lessen or enhance the work of novelists. We think of Dr Miller as a man with imagination. He would agree that of all species of reality the skull is the most alarming. I think he would also agree that when Hamlet takes Yorick's skull into his hand and raises the theme into the field of art, then though nothing of the harshness of reality is evaded, the corrupt takes on in- corruptibility and by the power of beauty we are reconciled to truth. In fact the whole truth is made manifest. The Human Body falsifies the truth. The body is neither ugly nor horrific nor mechanical: but that is what it is reduced to here — the book is reductionism in excelsis.

The text begins with these words: 'You can think of your body as a space capsule with your head as the command module and your trunk as the service module.' After this clarion call of an invitation the doctor is free to continue: 'The head con- tains your brain, the computer which guides and controls the human space mission. Millions of cables called nerves carry coded messages from the eyes, ears, nose, tongue and skin to the brain. By storing this infor- mation in its memory, the brain allows you to remember the past so that you can com- pare it with the present and make decisions about the future. It can turn these decisions into actions by sending messages along the cables to the muscles which work the joints of the skeleton. The brain also has control centres which govern the machinery in the service module. They automatically regulate the rate and rhythm of your heart and your breathing and tell you when to drink and when to eat. As you can see, the computer in your head controls your life.'

That seems rather a strange way of presenting what we might roughly call the truth of the matter. The computer in your head controls your life. It could be true of robots, if such exist. But the human body is entirely organic and so creative that it can actually make objective computers.

It may be thought that I am making heavy weather over this book, and that my aesthetic and philosophic approach is altogether inappropriate. Well, let's see what we've got here. Actually the reader of this book has only to turn over six pages before completing it. Dr Miller's contribu- tion consists in the naming of parts; in all, about 40 such encapsulations. Thus 'The small intestine is about twenty feet long. The reason for its great length is that it needs a huge surface area for chemical ab- sorption so that the body can get the nourishment it needs.' These nuggets of in- formation are sprinkled throughout the 12 pages — the 'small intestine' piece being number 12. So much for Dr Jonathan Miller's contribution. His chief job is to feed his collaborator, David Pelham, the Art Director of vast reputation and interna- tional acclaim. They decided upon a stunt in the guise of pop education.

The moment you open the book a one- eyed monster composed of shining card- board pops up at you. If alarmed by this apparition your hands tremble a little as you hold the book, then the fleshless lips will move in an alluring leer. This is yourself you look upon. You turn the page. This time all your innards rise up to greet you in lurid layers. Turning the page again your affrighted gaze is confronted with the liver or the lungs hung aloft as luminaries that bear witness to the Age of the Com- puter. It is gOod fun. It is a real aid to modern education which has decreed that Imagination shall be banished from the world and the Pictorial crowned king. This can't be done? An awful lot can be done in the destruction of the young. Mr Moon can decide that a thousand couples, willy-nilly, must be married on Tuesday — and a thou- sand such will smilingly obey. The Chinese government can decree that henceforth and until further notice there will be no more brothers or sisters throughout the land. So why should not the inner eye of imagination be suppressed and be replaced by the simple capacity to look at a picture?

The book is likely to have a large sale. But perhaps few readers. The adults who buy it will find a text book with ordinary il- lustrations easier to work out (I still cannot find number 12). But they will be pleased with it as a toy. Young children are so wholly part of their bodies that physiology is not for them — (though much of the text is in baby-language). Schoolboys cannot use it as a school book because its format is totally unsuited. It is best to regard it as a Sign of the Times.