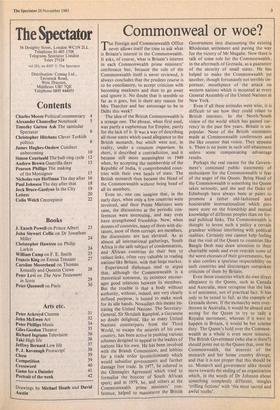 The Foreign and Commonwealth Office never allows itself the time to ask what is Britain's interest in the Commonwealth.

It asks, of course, what is Britain's interest in each Commonwealth prime ministers'

conference but, because the role of the Commonwealth itself is never reviewed, it always concludes that the prudent course is to be conciliatory, to accept criticism with becoming meekness and then to go away and ignore it. No doubt that is sensible so far as it goes, but is there any reason for Mrs Thatcher and her entourage to be in Delhi this week?

The idea of the British Commonwealth is a strange one. The phrase, when first used, was partly a euphemism for Empire, partly for the lack of it. It was a way of describing all those states which owed allegiance to the British monarch, but which were not, in reality, under a common imperium. In short, it described a contradiction, and it became still more meaningless in 1949 when, by accepting the membership of the Republic of India, it comprehended coun- tries with their own heads of state. The British monarch then became the Head of the Commonwealth without being head of all its members.

Even so, one can imagine that, in the early days, when only a few countries were involved, and their Prime Ministers were sane, the discussions at the periodic con- ferences were interesting, and may even have strengthened friendship. Now, when dozens of countries, many of them with dic- tators, most of them corrupt, are members, the discussions are less elevated. As at almost all international gatherings, South Africa is the safe subject of condemnation, and African countries do their best to reduce links, often very valuable to trading nations like Britain, with that large market.

Experienced diplomats tend to argue that, although the Commonwealth is a theoretical nonsense, its existence encour- ages good relations between its members. But the trouble is that a body without authority, without, indeed, any very clearly defined purpose, is bound to make work for its idle hands. Nowadays this means im- itating the United Nations. The Secretary- General, Sir Shridath Ramphal, a Guyanese no doubt delighted, like so many United• Nations counterparts from the Third World, to escape the miseries of his own country, has been active in pushing various schemes designed to appeal to the leaders of nations like his own. He has been involved with the Brandt Commission, and lobbies for a trade order (protectionism) which would subsidise governments and further damage free trade. In 1977, he ushered in the Gleneagles Agreement which tried to formalise the boycott of South African sport; and in 1979, he, and others at the Commonwealth prime ministers' con- ference, helped to manoeuvre the British

Government into discounting the existing Rhodesian settlement and paving the way for the victory of Mr Mugabe. Now there is talk of some role for the Commonwealth, in the aftermath of Grenada, as a guarantor of the security of small states. He has helped to make the Commonwealth yet another, though fortunately not terribly im- • portant, mouthpiece of the attack on western nations which is mounted at every General Assembly of the United Nations at New York.

Even if all these attitudes were wise, it is difficult to see how they could relate to British interests. In the North/South vision of the world which has gained cur- rency in the past few years, Britain is un- popular. None of the British statements made at Commonwealth conferences and the like counter that vision. They appease it. There is no point in such self-abasement unless some compensating advantage results.

Perhaps the real reason for the Govern- ment's continued public statements of enthusiasm for the Commonwealth is fear of the anger of the Queen. Being Head of the Commonwealth is something the Queen takes seriously, and she and the Duke of Edinburgh have always been at pains to promote a rather old-fashioned and honourable internationalism which puts more store on the friendship and mutual knowledge of different peoples than on for- mal political links. The Commonwealth is thought to invest such a policy a certain grandeur without interfering with political realities, Certainly one cannot help feeling that the visit of the Queen to countries like Bangla Desh may draw attention to their charitable needs and even restrain some of the worst excesses of their governments, but it also confers a spurious respectability on such countries and discourages outspoken criticism of them by Britain.

Even those countries which do owe direct allegiance to the Queen, such as Canada and Australia, must recognise that the link is of sentiment, not of practical fact. It has only to be tested to fail, as the example of Grenada shows. If the monarchy were over- thrown in Australia, it would be absurd and wrong for the Queen to try to rally a Royalist movement, whereas if it were to happen in Britain, it would be her solemn duty. The Queen's hold over the Common- wealth as a whole is even more tenuous, The British Government (who else is there?) should point out to the Queen that, over the Commonwealth, the interests of the monarch and her home country diverge, and that it is not proper that this should be so. Monarch and government alike should move towards the ending of an organisation which, in the words of Dr Johnson about something completely different, mingles 'trifling fictions' with 'the most sacred and awful truths'.