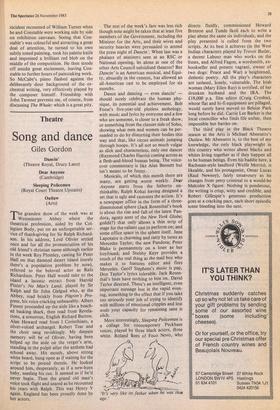 The grandest show of the week was at Westminster Abbey where the theatrical profession, aided by the Col- legiate Body, put on an unforgettable ser- vice of thanksgiving for Sir Ralph Richard- son. In his address, Lord Olivier settled once and for all the pronunciation of his old friend's christian name although earlier in the week Roy Plomley, casting Sir Peter Hall on that damned desert island (surely there's a population problem by now), referred to the beloved actor as Rafe Richardson. Peter Hall would take to the island a laconic extract from Harold Pinter's No Man's Land, played by Sir Ralph and Sir John Gielgud who, at the Abbey, read briskly from Pilgrim's Pro- gress, his voice cracking unbearably. Albert Finney proceeded up the aisle like a beach- ed basking shark, then read from Revela- tions, a sonorous, English Richard Burton. Alan Howard read from I Corinthians, a silver-voiced archangel. Robert Tear and the choir sang ravishingly. My deepest memory will be of Olivier, having been helped up the aisle on the verger's arm, standing in the pulpit after the anthem had echoed away. His mouth, above strong white beard, hung open as if waiting for the script to be posted therein. He looked around him, desperately, as if a new-born baby, needing his cue, It seemed as if he'd never begin. Then the grand old man's voice took flight and soared as he recounted his years with Ralph. This was Henry V again. England has been proudly done by her actors. The rest of the week's fare was less rich though note might be taken that at least five members of the Government, including the Minister for the Arts, and their wives and security heavies were persuaded to attend the press night of Dancin'. When last was a phalanx of ministers seen at an RSC or National opening, let alone at one of the other Arts Council subsidised theatres? But Dancin' is an American musical, and Equi- ty, absurdly in the context, has allowed an all-American cast to be employed for six months.

Dance and dancing — even dancin' should surely celebrate the human phy- sique, its potential and achievement. Bob Fosse's five-year-old plotless anthology, with music and lyrics by everyone and a few who are someone, is closer to a freak show, or something from the classier side of Soho, showing what men and women can be per- suaded to do by distorting their bodies this way and that, like circus animals jumping through hoops. It's all not so much vulgar as slick and characterless, only one dancer (Raymond Charles Harris) coming across as a flesh-and-blood human being. The voice- over commentary is like Alan Bennett but isn't meant to be funny.

Musicals, of which this month there are many, are getting worse weekly. Deer Anyone starts from the hitherto un- thinkable, Ralph Koltai having designed a set that is ugly and castrates the action. It's a newspaper office in the form of a three- dimensional sphere (Jack Rosenthal's book is about the rise and fall of the latest Pan- dora, agony aunt of the New York Globe; geddit?) that only allows a thin strip of stage for the valiant cast to perform on; and some office space in the sphere itself. Jane Lapotaire is charming and ratty by turns as Mercedes Taylor, the new Pandora; Peter Blake is permanently on a loser as her boyfriend; and Stubby Kaye provides a touch of the real thing as the mail boy who makes it to features editor and fires Mercedes. Geoff Stephens's music is pap, Don Taylor's lyrics tolerable. Jack Rosen- thal's lines have nothing to bite on. David Taylor directed. There's an intelligent, even important message lost in the vapid even- ing, something to the effect that if you take too seriously your job of trying to identify with millions of emotional cripples and lost souls your capacity for remaining sane is zilch.

`It's very like its father when he was that age.'

directs fluidly, commissioned Howard Brenton and Tunde lkoli each to write a play about the same six individuals, and the play presented is culled from the two scripts. At its best it achieves (in the West Indian characters played by Trevor Butler, a decent Labour man who works on the buses, and Alfred Fagon, a wordsmith, ex- bookseller and present vagrant, owner of two dogs: Peace and War) a heightened, demotic poetry. All the play's characters are isolated, lonely, vulnerable. The Irish woman (Mary Ellen Ray) is terrified, of her drunken husband and the IRA. The £19,000 p.a. film editor (Craig Crosbie), whose flat and hi-fi equipment are pillaged, would surely have moved to Belsize Park long before he did. Carrie Lee Barker is the local councillor who finds life unfair, then impossible but battles on.

The third play in the Black Theatre season at the Arts is Michael Abensetts's Outlaw. Mr Abensetts is, to the best of my knowledge, the only black playwright in this country who writes about blacks and whites living together as if they happen all to be human beings. Even his baddie here, a Rachman-style landlord (Wolfe Morris), is likeable, and his protagonist, Omar Lucas (Raul Newney), fairly unsavoury as he changes from petty criminal to a would-be Malcolm X figure. Nothing is ponderous, the writing is crisp, witty and credible, and Robert Gillespie's generous production goes at a cracking pace, each short episodic scene bleeding into the next.