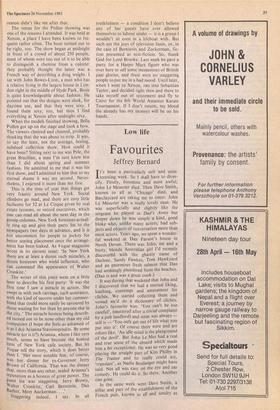 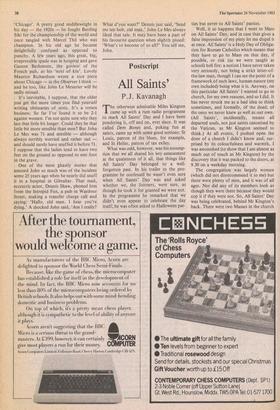 t's been a particularly soft and unin-

teresting week. So I shall have to diver- sify. Firstly, foremost and most awful, John Le Mesurier died. Then Dave Smith, known to all as 'Chicago' died, and Barclaycard are taking me to court. John Le Mesurier was a really lovely man. He was superficially and slightly like the sergeant he played in Dad's Army but deeper down he was simply a kind, good bloke who, unlike many actors, had sub- jects and objects of conversation more than most actors. Years ago, we spent a wonder- ful weekend at Dan Farson's house in North Devon. There was John, me and a busty, blonde Australian girl I'd recently discovered with the ghastly name of Darlene, Sandy Fawkes, Tom Hawkyard and an enormous fresh salmon that Dan had seemingly plundered from the beaches. (Dan is and was a great cook.) It was during that weekend that John and I discovered that we had a mutual liking, loathing, contempt and amusement for cliches. We started collecting them and vowed we'd do a dictionary of clichés. John's favourite was: 'You can't be too careful', (muttered after a trivial complaint by a pub landlord) and mine was always still is — 'You only get out of life what you put into it'. Of course there were and are others like, 'An idle mind is the playground of the devil'. But John Le Mes had a real and true sense of the absurd which made him a bit exceptional. He was so very good playing the straight part of Kim Philby in The Traitor and he really could act, 'translate', as Nadia Boulanger might have said. Not all was easy on the eye and ear comedy. He could do it. So there. Another one gone.

In the same week went Dave Smith, ,A pillar and part of the establishment of the French pub, known to all and sundry as

`Chicago'. A pretty good middleweight in his day — the 1920s — he fought Battling Siki for the championship of the world and once tangled with Marcel Thil who was champion. In his old age he became delightfully confused as opposed to punchy. A few years ago, this great, big, irrepressible spade was in hospital and gave Gaston Berlernont, the govnor of the French pub, as his 'next of kin', Lovely Maurice Richardson wrote a nice piece about Chicago — in the Observer I think and he too, like John Le Mesurier will be sadly missed. It's inevitable, 1 suppose, that the older you get the more times you find yourself writing obituaries of sorts, It's a rotten business. So far I've found it to be 2-1 against women. I'm not quite sure why they last that little bit longer. Could they be that little bit more sensible than men? But John Le Mes was 71 and sensible — although always terribly worried and rather sad and should surely have snuffed it before 71. I suppose that the ladies tend to have two feet on the ground as opposed to one foot in the grave. One of the most ghastly stories that amused John so much was of the incident some 25 years ago when he nearly did snuff it in a hospital in Gibraltar. That mad, eccentric actor, Dennis Shaw, phoned him from the Intrepid Fox, a pub in Wardour Street, making a transfer charge call and .saying: 'Hallo, old man. I hear you're. dying.' A shocked John said, 'Am I really? What d'you want?' Dennis just said, 'Send me ten bob, old man.' John Le Mes always liked that tale. It may have been a part of his favourite question when slightly pissed: 'What's to become of us all?' You tell me, John.