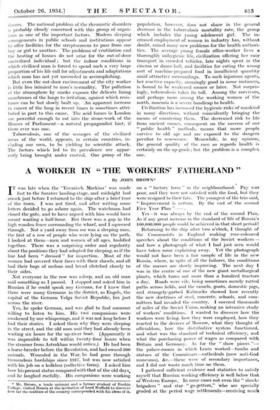 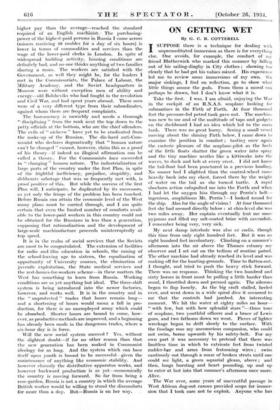 A WORKER IN " THE WORKERS' FATHERLAND "

By JOHN BROWN* IT was late when the ' Tovarisch Markina ' was made fast to the Saratov landing-stage, and midnight had struck just before I returned to the ship after a brief tour of the town. I was not tired, and after writing some letters decided to go ashore again. The watchman had closed the gate, and to have argued with him would have meant wasting a half-hour. But there was a gap in the high wooden fence surrounding the wharf, and I squeezed through. Not a yard away from me was a sleeping man, the first of a row of people who were lying on the path. I looked at them—men and women of all ages, huddled together. There was a surprising order and regularity about the positions they had adopted for sleeping, as if the line had been " dressed " for inspection. Most of the women had covered their faces with their shawls, and all had their bags of melons and bread clutched closely to their sides.

Not everyone in the row was asleep, and an old man said something as I passed. I stopped and asked him in Russian if he could speak any German, for I knew that there were many Germans in the district, as Engels, the capital of the German Volga Soviet Republic, lies just across the river.

Yes, he spoke German, and was glad to find someone willing to listen to him. His two companions were awakened by our whisperings, and it was not long before I had their stories. I asked them why they were sleeping in the street, and the old man said they had already been waiting six hours for the up-river boat. (Apparently it was impossible to tell within twenty-four hours when the steamer from Astrakhan would arrive.) He had been a horse-breeder before the Revolution, and had owned 300 animals. Wounded in the War, he had gone through tremendous hardships since 1917, but was now satisfied with his job on a kolkhoz (collective farm). I asked him how his present status compared with that of the old days, and he laughed ruefully. His companions were working * Mr. Brown, a trade unionist and a former student of Ruskin College, visited Russia at the invitation of Lord Nuffield to discover how far the realities of the country corresponded with his ideas of it, on a " factory farm " in the neighbourhood. Pay was poor, and they were not satisfied with the food, but they were resigned to their fate. The youngest of the trio said, " Improvement is certain. By the end of the second Five Year Plan " Yes—it was always by the end of the second Plan. As if any great increase in the standard of life of Russia's 160,000,000 people could be achieved in that short period!

Returning to the ship after two o'clock, I thought of the Communists in England making rose-coloured speeches about the conditions of the Soviet workers— and how a photograph of what I had just seen would have taken sonic explaining away. Yet the photograph would not have been a fair sample of life in the new Russia, where, in spite of all the failures, the conditions of the masses are slowly improving. The next day I was in the centre of one of the new giant metallurgical plants, which turns out more than a hundred tractors a day. Roads were vile, being sometimes merely rutted paths across fields, and the camels, goats, domestic pigs, and strangely-garbed Kalmucks showed how recently the new doctrines of steel, concrete, schools, and com- mittees had invaded the country. I covered thousands of miles of the Soviet Union, making an intensive study of workers' conditions. I wanted to discover how the workers were living, how they were employed, how they reacted to the decrees of Moscow, what they thought of officialdom, how the distributive system functioned, and what was the standard of technical efficiency, and what the purchasing power of wages as compared with Britain and Germany. As for the " show pieces "- the palace-rooms in which Lenin worked—tombs and statues of the Commissars—cathedrals (now anti-God museums), &c.—these were of secondary importance, and I did not waste much time on them.

I gathered sufficient evidence and statistics to satisfy myself that Rtissian working efficiency is well below that of Western Europe. In some cases not even the " shock- brigaders " and star " go-getters," who are specially graded at the period wage settlements—receiving much higher pay than the average—reached the standard required of an English-. - The purchasing- power of the highest-paid persons in RusSia I came across (miners. receiving 40 roubles for a day of six hours) is lower in terms of commodities and services, than the wage of the lower-paid clerks in . London. In spite of widespread * building activity, hOuSizig conditions are definitely bad, and no one thinks anything of two families sharing a room. The workers are satisfied with the Government, as well they might be, for the leaders I met in the Commissariats; the Palace of Labour, the Military Academy, and the Soviet headquarters in Moscow were without exception men of ability and energy—old Bolsheviks who had fought in the revolution and Civil War, and had spent years abroad. These men were of a very different type from their subordinates, against whom there are frequent complaints: The bureaucracy is unwieldy and needs a thorough " disciplining " from the rank next the top down to the petty officials at the bottom, who are the chief offenders. The evils of " nichevo " have yet to be eradicated from the make-up of the Russian. The die-hard anti-Com- munist who declares dogmatically that " human nature can't be changed " cannot, however, "claim this as a proof of his theory—if indeed an illogiCal affirmation can be called a theory. For the Communists have succeeded in " changing " human nature. The industrialization of large parts of the country under the first Plan, in spite of the frightful inefficiency, prejudice, stupidity, and deliberate sabotage that was so frequently met with, is proof positive of this. But while the success of the first Plan will, I anticipate, be duplicated by its successors, as yet only the fringe of the problem has been touched. Before Russia can attain the economic level of the West many plans must be carried through, and I am quite certain that even the limited number of comforts avail- able to the lower-paid workers in this country could not be obtained for the Russians in less than a generation, supposing that rationalization and the development of large-scale machinofacture proceeds uninterruptedly at top speed.

It is in the realm of social services that the Soviets arc most to be congratulated. The extension of facilities for radio and film- education in schools, the raising of the school-leaving age to sixteen, the equalization of opportunity of University courses, the elimination of juvenile exploitation, the State medical services and the rest-homes-for-workers scheme—in these matters the West has something to learn from Russia. Working conditions are as yet anything but ideal. The three-shift system is being introduced into the newer factories, however, -and works well. It is in the country and in the " unprotected " trades that hours remain long— and a shortening of hours would mean a fall in pro- duction, for there is no unemployed army which could be absorbed. Shorter hours are bound to come, how- ever, as productive.methods are improved, and a beginning has already been made in the dangerous trades, where a six-hour day is in force.

Will the new social system succeed ? Yes, without the slightest doubt—if for no other reason than that. the new generation has been soaked in Communist ideology for so long. And the system which can base itself upon yoUth is bound to be successful—given the maintenance of anything like economic stability. And however clumsily the distributive apparatus works, and however backward production is as yet—economically the country is moving forward. So - far from -being a rose-garden, Russia is 'not a country in which the average British worker would be willing to Stand the discomforts for more than a day. But—Russia is on her way. ..