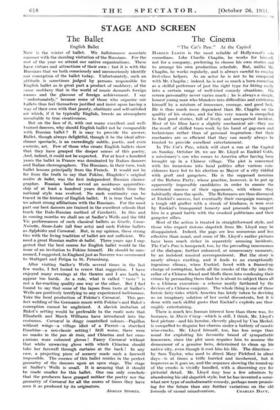 The Cinema "The Cat's Paw." At the Capitol HAROLD LLOYD

is the most reliable of Hollywood's solo comedians. Like Charlie Chaplin, he works for himself, not for a company, preferring to choose his own stories and to arrange his own production schedule. But, unlike lir, Chaplin, he works regularly, and is always careful to employ first-class helpers. As an actor he is not to be compared with Mr. Chaplin ; indeed, he is not so much a born comedian as a skilful performer of just the right type for fitting easily into a certain range of well-tried comedy situations. His screen personality never varies much ; he is always a simple, honest young man who blunders into difficulties and extricates himself by a mixture of innocence, courage, and good luck. He is thus much more dependent than Mr. Chaplin on the quality of his stories, and for this very reason is compelled to find good stories, full of lively and unexpected incident. Most of his films have a slightly mechanical air—they are the result of skilled team work by his band of gag-men and technicians rather than of personal inspiration—but their mechanics are so efficient that they can nearly always be trusted to provide excellent entertainment.

In The Cat's Paw, which will start a run at the Capitol on Sunday, October 28, we see Mr. Lloyd as Ezekiel Cobb, a missionary's son who comes to America after having, been brought up in a Chinese village. The plot is concerned with his incursions into local politics after various coin- cidences have led to his election as Mayor of a city riddled with graft and gangsters. He is the supposed nominee of the Reform Party, whose practice, however, is to put up apparently impossible candidates in order to ensure the continued success of their opponents, with whom they habitually share the spoils. The Reformers are thus dismayed at Ezekiel's success, but eventually their campaign manager, a tough old grafter with a streak of kindness, is won over by Ezekiel's transparent honesty and proceeds to support him in a grand battle with the crooked politicians and their gangster allies.

Most of the action is treated in straightforward style, and those who expect riotous slapstick from Mr. Lloyd may be disappointed. Indeed, the gags are less numerous and less effective than usual, and some of Mr. Lloyd's earlier pictures have been much richer in separately amusing incidents. The Cat's Paw is hampered, too, by the prevailing raucousness of the dialogue, further enhanced, at unnecessary moments, by an ins=istent musical accompaniment. But the story is nearly always exciting, and it leads to an exceptionally ingenious climax, when Exekiel, faced with a framed-up charge of corruption, herds all the crooks of the city into the cellar of a Chinese friend and bluffs them into confessing their crimes by persuading them that he is about to subject them all to a Chinese execution—a scheme neatly furthered by the devices of a Chinese conjurer. The whole thing is one of those heroic fairy-tales Which' America has lately taken to devising as an imaginary solution' of her social discontents, but it is done with such skilful gusto that Ezekiel's exploits are thor- oughly entertaining.

There is much less .human interest here than there was, for instance, in Movie Crazy—which is still, I think, Mr. Lloyd's best picture—and his heroine, cleverly played by Una Merkel, is compelled to disguise her charms under a battety of caustic wise-cracks. Mr. Lloyd himself, too, has less scope than usual for exploiting his favourite brand of sympathetic innocence, since the plot soon requires him to assume the demeanour of a genuine hero, determined to clean up his native city, even though it cost him his life. The direction— by Sam Taylor, who used to direct Mary Pickford in silent days—is at times a trifle hurried and incoherent, but it improves as it goes on, and the sequence showing the round-up of the crooks is vividly handled, with a discerning eye for Pictorial detail. Mr. Lloyd may lose a few admirers by abandoning his old slapstiek style, but he has invented a some- What new type of melodramatic comedy, perhaps more promis- ing for the future than any further variations on the old formula of casual misadventure. CHARLES DAVY.