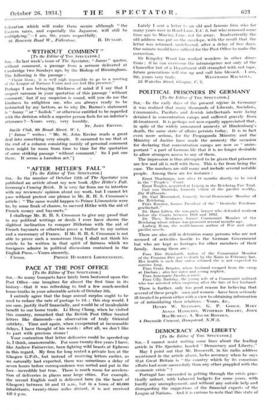 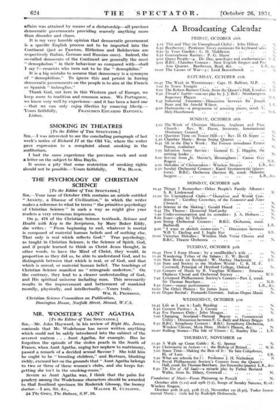 [To the Editor of THE SPECTATOR.] SIR,—I cannot resist writing some lines about the leading article in The Spectator, headed " Democracy and Liberty."

May I point out that Mr. Roosevelt, in his radio address mentioned in the article above, lacks accuracy when he says that Great Britain is " the country which by its conscious efforts had more successfully than any other grappled with the economic crisis ".?

Portugal has succeeded in getting through the crisis prac- tically unhurt, with balanced budgets for some years, with hardly any unemPloyment, and without any outside help and disregarding the suggestions of the financial experts of the League of Nations. And it is curious to note that this state of affairs was attained by means of a dictatorship-all previous democratic governments providing scarcely anything more than disorder and chaos.

It is my very humble opinion that democratic government is a specific English process not to be imported into the Continent (just as Fascism, Hitlerism and Bolshevism are respectively Italian, Lerman and Russian ones). Indeed, the so-called democrats of the Continent are generally the most " demophobus " in their behaviour as compared with-shall I say ?-cesarists who turn out to be the " demophilus."

. It is a big mistake to assume that democracy is a synonym of " demophilism." To ignore this and persist in forcing democratic governments on the people is to aim at the French or Spanish " imbroglios."

Thank-God, out here in this Western part of Europe, we keep more to tradition and common sense. We Portuguese, we know very well by experience-and it has been a hard one -that we can only enjoy liberties by removing liberty.-