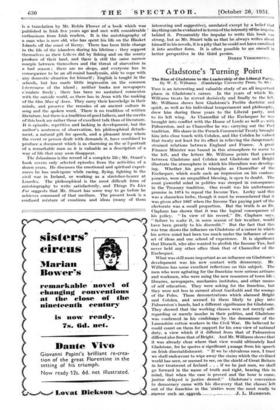 THIS is an interesting and valuable study of an all important phase in Gladstone's career. .In the years of which Mr. Williams treats he moved decisively and 'finally to the left. Mr. Williams shows how Gladstone's Peelite doctrine and spirit, as well as his individual temperament and philosophy, drew him during those years to the Liberal party, and to its left wing. As 'Chanctelkir of the Exchequer he was brought into conflict with the House of Lords as well as with Palmerston, -and as Chancellor he was carrying out the Peel tradition. His share in the French Commercial Treaty brought him into close touch with Cobden, and like Cobden he valued that treaty not least for its effect in relieving the dangerously strained relations between England and France. A great Finance Minister was bound in this atmosphere to move to the left, and the letters Mr. Williams prints that passed between Gladstone and Cobden and Gladstone and 'Bright illustrate the atmosphere in which his liberalism was develop- ing. Whether _ his great triumphs as Chancellor• of the Exchequer, which made such an impression on his contem- poraries, were an unqualified blessing, is open to doubt. The most powerful mind in politics was steeped in consequence in the Treasury tradition. One result was his unfortunate promise in 1874 to repeal the Income Tax. Lecky said this was a shameless bribe, though it must be remembered that it was given after 1867 when .the Income Tax paying part' of the electorate was a small proportion. But the truth is as Dr. Clapham has shown that it was the logical consequence of his policy. " In view of his record," Dr. Clapham says, " failure to make it, in some season of fair weather, would have been greatly to his discredit." But the fact that this was true shows the influence on Gladstone of a career in which his active mind had been too much under the influence of one set of ideas and one school of experience. It is significant that Disraeli, who also wanted to abolish the Income Tax, had never held any other office than that of Chancellor of the Exchequer.

What was still more important as an influence on Gladstone's development was his new contact with democracy. Mr. Williams has some excellent reflections on this subject. The men who were agitating for the franchise were serious artisans and workmen, who were using the new resources of town life ; libraries, newspapers, mechanics institutes, and other means of self education. They were asking for the franchise, but they were not less in earnest about Garibaldi and the wrongs of the Poles. These demonstrations which alarmed Bright and Cobden, and seemed. to them likely to play into Palmerston's hands, had a different significance for Gladstone. They showed that the working classes were not merely self- regarding or merely insular in their politics, and Gladstone was confirm41..in his cOnfidence :by. the demeanour of the Lancashire cotton workers in the Civil War. He believed he could count on them for support for his own view of national duty, a view which if it differed from that of Palmerston differed also from that of Bright. And Mr. Williams shows that it was already • clear where that view would- ultimately lead Gladstone, for he quotes a- significant passage from his speech on Irish disestablishment. " If we be chivalrous men, I trust we shall endeavour to wipe away the stains which the civilized world has seen, or seemed to see, on the shield of Great Britain in her treatment of Ireland . . . if we be just men, we shall go forward in the name of truth and right, bearing thisin mind, that when the case is proved and the hour is come, justice delayed is justice denied." Gladstone's conversion to democracy came with his discovery that the classe(left out of the franchise in the 'sixties were the most ready, to allswer suet -an _ oiawak TrAmmozol.