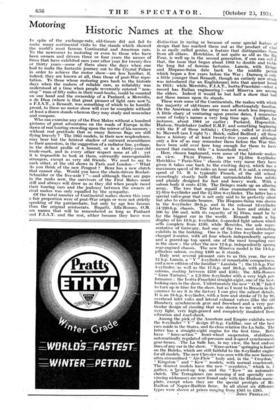 Motoring Historic Names at the Show Is spite of the

exchange-rate, old-timers did not fail to make many sentimental visits to the -stands which showed the world's most famous Continental and American cars. To the newcomer to motoring or even to those who have been owners and drivers three or four years the names of firms that have exhibited cars year after year for twenty-five or thirty years—some of them since the days when • one had to make the fantastic journey out to the Crystal Palace in order to achieve the motor show—are less familiar, if, indeed, they are known at all, than those of post-War repu- tation. To those whose motoring goes back to the historic days when the makers of reliable cars, as reliability was understood at a time when people reverently entered " non- stop " runs of fifty miles in their road-books, could be counted on one hand and the ownership of a Panhard, a Mercedes, a de Dion (where is that great pioneer of light cars now ?), a F.I.A.T., a Renault, was something of which to be humbly proud, to these no motor show will ever be complete without at least a dozen stands whereon they may study and remember and compare.

Who can examine any of the First Makes without a hundred pictures of great adventures on the roads of Europe in the dawn of real touring crowding upon the mirror of his memory ; without real gratitude that so many famous flags are still flying bravely ? The 1935 models, in their new resplendence, may bear but the faintest shadow of outward resemblance to their ancestors, in the suggestion of a radiator line, Ferhaps, in the defiant profile of a, „bonnet, or in a thirty-year-old trade-mark, and in every other respect none at all : yet it is impossible to look. at them, - outwardly unrecognizable 'strangers, except as very old friends. We used to say, to each other, at the old shows in Paris and London—" What do you think of the new' Peugeot ? Benz has a new clutch that cannot slip. Would you have the chain-driven Rochet- Schneider or the live-axle ? "—and although there are gaps in the ranks now, the survivors of the First Makes must still and always will draw us as they did when people raced their touring cars and :the-jealousy between the owners of rival makes was only equalled by the sympathy.

Of the total number of Continental makes shown this year a fair proportion were of post-War origin or were not strictly speaking of the patriarchate, but only by age less famous than the original aristocrats. Bugatti, Alfa-Romeo, O.M. are names that will be remembered as long as Panhard and F.I.A.T. and the rest, either because they have won

distinctionin racing or because of some special feature or design that' has- marked them out as the product of what is so easily called genius, a feature that distinguishes them from all others. Hotchkiss, if not quite as old as the Big Four, is well up in the second generation, if one can call it that, the issue that began about 1903 to double and treble the long list of famous factorieS. - Lancia; with Delage and Hispano-Suiza date back to the middle period which began a few years before the War ; Darracq is only a little younger than Renault, though an entirely new strain was introduced (by an Englishman) into that ancient breed in 1913 ; while Mercedes, F.I.A.T., Isotta-Fraschini—what a record has Italian engineering !—and Minerva are among the elders. Indeed it would be but half a show that had not these names upon its stands.

These were some of the Continentals, the makes with which the majority of old-timers are most affectionately familiar. On the American side the array was not much less imposing. A little chary of venturing' upon precise' dates, I remember , some of today's names a very king" time ago. Cadillac, for instance, about 1904 or earlier ; Packard, Hupmobile, Hudson, Studebaker (called-E.M.F. and something beginning with the F of those initials) ; Chrysler, called or evolved by Maxwell (am I right ?) ; Buick, called Bedford ' • all these have a history of at least twenty-five years and although only a few of us may remember them before the War they have been sold over here long enough for them to have earned that curious title " a household word."

Here, chosen haphazard, were some of the historic makes

on view. Frcan France, the new 8f-litre 6-cylinder Hotchkiss " Paris-Nice " chassis (the very name they have given it takes one back to the exciting days), which has a maximum. speed of 90 miles an hour and, it is said, a cruising speed of 75. It is typically French, of the old school, exceedingly stoutly built (that untranslatable Nen solide) and plainly designed for fast and heavy work. With a saloon body it costs /750. The Delages made up an alluring array. The two that repaid close examination were the 21-litre 6-cylinder and the 2i-litre 8-cylinder. The latter has a special valve-gear that is not only said to be perfectly silent but also to eliminate-bounce. The Hispano-Suiza was shown in the 6-cylinder 30-h.p. and in the colossal 12-cylinder 54/220-h.p. chaisis. The latter has a bore and stroke of 100 by 100 and, with its capacity of 94 litres, must be by far the biggest car in .the world. Renault made a big display of his 12-h.p. 4-cylinder, 3-speeded light saloon which sells complete from £189, while Mercedes, the sole repre- sentative of Germany, had one of the two most interesting exhibits in the, building. One is the 5-litre 8-cylinder super- charged 2-seater, with all four wheels independently sprung and a geared-up top_ speed, one of the most tempting cars in the show ;. the other the new 12-h.p. independently sprung rear-engined chassis. The new Minerva 'Model is The 14-h.p. pillarless saloon. costing £490 as it stands. Italy sent several pleasant cars to us this year, the new 12 h.p. Lancia, a " V ' 4-cylinder of remarkable compactness. and a new edition of the familiar " Lambda " ; the 11-h Fiat Fiat 4-cylinder; as well as • the 17-h.p. and 20-h.p. with ,pillarless saloons, costing between £210 and £585; the Alfa-Romeo " Gran Turismo," a 2.3-litre 6-cylinder with a very high per- formance ; the Isotta-Frasehini straight-eight, one of the beSt- looking cars in the show. Unfortunately the new " 0.M." failed to turn up in time for the show, but as I went to Brescia in the summer to see it in the factory I can give the salient details. It is an 18-h.p. 6-cylinder, with a bore and stroke of 71 by 90, overhead inlet vales and lateral exhaust valves (like the old Humber), synchromesh gear and freewheel and a very par- -ticular design-of steering-that was shown- to me with pride, very light, very high-geared and completely insulated from vibration and road-shock.

Among the pick,of the American and Empire exhibits were the 8-cylinder-`` V" design 37-h.p. Cadillac, one of the best cars made in the States, and its close relation the La, Salle. The latter has a straight-eight engine for the first time. Both have " knee-action " front-wheel suspension, stabilizers, automatically regulated oil-pressure and 3-speed synchromesh .The La Salle has, in my view, the best end-on lines of any car in the show. "Knee-action " springing is found on the Buicks, which are still faithful to the 8-cylinder engine for all models. The new Chrysler was seen with the now famous . ultra-streamlined " Air-Flow " body and, in the." Croydon," " Kingston " and " Kew" models, with normal coachwork. The dearest models have the new " overdrive," -.which is, I

• gather, a teared-up• top, and the " Kew " an automatic clutch. The Terraplanes (an amusing if not specially con- vincing nickname) are now found only with the Hudson name- plate, except when they are the special proteges of Mr. Railton of Napier-Railton fame. In all about six different types were shown at prices ranging from £565 to £285.