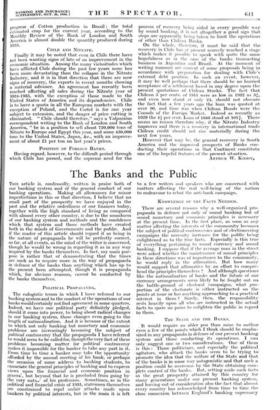 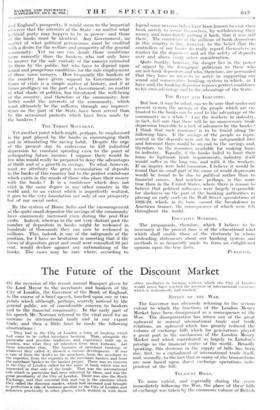 The Banks and the Public

Tins article is, confessedly, written in praise both of our banking system and of the general conduct of our banking operations. Making all allowances for minor imperfections in this or that direction, I believe that no small part of the prosperity we have enjoyed in the past and the relative orderliness of our finances today, together with the high standard of living as compared with almost every other country, is due to the soundness of our banking system and methods and the confidence which that system and those, methods have created both in the minds of Governments and the public. And if the reader of this article should regard it as being in the nature of propaganda he will be perfectly correct, So far, at all events, as the mind of the writer is concerned, though he would be wrong in regarding it as in any way inspired by the banks themselves. In fact, my main pur- pose is rather that of demonstrating that the times are such as to require more in the way of propaganda in defence of the banks than anything which has up to the present been attempted, though it is propaganda which, for obvious reasons, cannot be conducted by the banks themselves.

The eulogistic terms in which I have referred to our banking system and to the conduct of the operations of our banks would certainly not find agreement in some quarters. Indeed, we have one political party definitely pledged, should it come into power, to bring about radical changes in our banking system, those changes even going to the length of nationalization. And it is because of the extent to which not only banking but monetary and economic problems are increasingly becoming the subject of political controversy that the propaganda I have referred to would seem to be called for, though the very fact of these problems becoming matter for political controversy makes it impossible for the banker to take any part in it. From time to time a banker may take the opportunity afforded by the annual meeting of his bank, or perhaps the occasion of some address to banking students, to enunciate the general principles of banking and to express views upon the financial and economic position in general, but beyond that he is precluded from going by the very natt..- of his profession. Sometimes, as in the political and financial crisis of 1931, statesmen themselves are constrained to repel unfair attacks made upon bankers by political interests, but in the main it is left to a few writers and speakers who are concerned with matters affecting the real well-being of the nation to endeavour to rebut the anti-bank campaign.

KNOWLEDGE OF THE FACTS NEEDED.

There are several reasons why a well-organized pro- paganda in defence not only of sound banking but of sound monetary and economic principles is necessary at the present time. In the first place, as soon as any matter affecting the interests of the- community becomesi the subject- of political controversies and of electioneering campaigns the necessity increases for the public being enlightened as to the true facts. Especially is this true of everything pertaining to sound currency and sound banking. I suppose that if the average man in the street Were asked whether the maintenance of sound principles in these directions was of importance to the community, he wquld reply in the affirmative. But how many would support that affirmative by an effort to compre- hend the principles themselves ? And although questions like the nationalization of banks and the future of our Currency arrangements seem likely to be fought out on the battle-ground of electoral campaigns, what pro- portion of the electorate is either instructed on the points at issue or has anything approaching to a practical interest in them ? Surely, then, the responsibility rests heavily upon all who are instructed in the actual facts to spare no pains to enlighten the public in regard to them.

THE STATE AND THE BANKS.

It would require an abler pen than mine to outliner even a few of the points which I think should be empha- sized in any propaganda in defence of our present banking system and those conducting its operations. I can only suggest one or two considerations. One of them is this : Those politicians, and especially the political agitators, who attack the banks seem to be trying tot promote the idea that the welfare of the State and that of the banks is in some way antagonistic and that such a position could be overcome by the State obtaining com- plete control of the banks. But, setting aside such facts as the great prosperity attained by this country for niany generations under our present banking • system, and leaving out of consideration also the fact that almost every country has acknowledged from time to time the clOse connexion between England's banking supremacy and England's prosperity, it would seem to the impartial observer that the interests of the State—no matter what political party may happen to be in power—and those of the banks must be identical. Any Government, no matter of what political persuasions, must be credited with a desire for the welfare and prosperity of the general community. Yet no one can desire those conditions more earnestly than the bankers, who not only have to answer for the safe custody of the moneys entrusted to them by the public, but who have to depend upon sound and prosperous conditions for the safe employment of those same. moneys. How frequently the bankers of the country have given support to Governments in times of crisis is a simple matter of history, and if itt times profligacy on the part of a Government, no matter of what shade of politics, has threatened the well-being of the country, and therefore of the community, how better could the interests of the community, which must ultimately be the sufferers through any improvi- dence on the part of the State, have been served than by the occasional protests which have been made by the bankers ?

Yet another point which might, perhaps, be emphasized is the part played by the banks in encouraging thrift and in stimulating the saving habit. Despite the urge of the present clay to endeavour to kill industrial depression by constant spending even to the point of anticipating future income, I suppose there would be few who would really be prepared to deny the advantages of thrift and of a growth in savings. To what, however, must we attribute the great accumulation of deposits in the banks of this country but to the perfect confidence which exists in the minds of those who place their money with the banks ? It is a confidence which does not exist in the same degree in any other country in the world and, to an extent which is imperfectly realized, it goes to the very foundation not only of our prosperity but of our social order.

By the system of Home Safes and the encouragement of the quite small depositor the savings of.the community have enormously increased even during the post-War yeah. Indeed,- whereas in the not very distant past the number of depositors in banks might be reckoned in hundreds of thousands they can now be reckoned in • millions. This, indeed, is one of the safeguards of the position, for I have no hesitation in asserting_ that if the views of depositors great and small were consulted 99 per cent, would declare against any nationalizing of the banks. The cases may be rare where, according to legend some nervous ladies have been known to visit their bank merely to assure themselves, by withdrawing their money and immediately putting it back, that it was still there. The confidence of the millions of bank depositors in this country is due, however, to the belief that the controllers of our banks do really regard themselves as trustees for the depositors and set the safety of deposits over and above every other consideration.

Quite frankly, however, the danger lies in the power of appeal by the demagogue politician to those who are not bank depositors and who, therefore, are persuaded that they have no interests to serve in supporting our sound and conservative banking system in which, as I have said, the banking depositor reposes perfect confidence to his own advantage and to the advantage of the State.'

THE BANKS AND INDUSTRY.

But how, it may be asked, can we be sure that under our present system the savings of the people which are en- trusted to the banks can be used to the advantage of the community as a whole ? Can the workers in industry, in fact, feel sure that there will be no unnecessary trade depression traceable to a lack of advances by the banks ? I think that such assurance is to be found along the following lines. If the savings of the people as repre- sented in the deposits were not to be safeguarded first and foremost there would be an end to the savings and, therefore, to the resources available for making loans to industry. Equally, if the banks failed to limit their loans to legitimate trade requirements, industry itself would suffer in the long run, and with it the workers. If an inquiry were held tomorrow, I believe it would be found that no small part of the cause of world depression would be found to be due to political rather than to financial causes. And nowhere, perhaps, is this more true than in the United States, where there is reason to believe that political influences were largely responsible for slackness on the part of the banking authorities in placing an early curb on the Wall Street speculations ol• 1926-29, which, in its turn, caused thee breakdown 'in American finance, the consequences of which were felt throughout the world.

The propaganda, therefore, which I believe to be necessary at the present time is of the educational kind which shall enable those of the electorate to whom misleading statements about our banking system and methods is so frequently made to form an enlightened opinion upon the true facts. PUBLICIST.