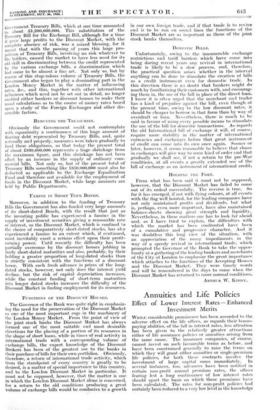 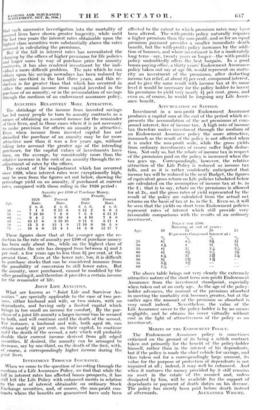 WHILE considerable prominence has been accorded to the adverse effect on the life offices, as regards their bonus- paying abilities, of the fall in interest rates, less attention has been given to the relatively greater attractions either of life assurance policies or annuities arising from the same cause. The insurance companies, of course,' cannot invest on such favourable terms as before, and have been constrained generally to raise the terms on which they will grant either annuities or single-premium life policies, for both these contracts involve the investment of large capital sums immediately. In several instances, too, advances have been notified in certain non-profit annual premium rates, the offices fearing lest a long continuance of low interest rates should upset the basis on which these premiums have been calculated. The rates for non-profit policies had certainly been redueed to a very low level in the knowledge that each successive investigation into the mortality of assured lives have shown greater longevity, -while until the last two years' the interest rates obtainable upon the highest class securities were substantially above the rates assumed in calculating the premiums. But if the fall in interest rates. has necessitated the charging by the offices of higher premiums for life policies and larger sums by way of purchase price for annuity contracts, it has also rendered investment by the indi- vidual a more difficult problem. The rate which he can obtain upon his savings nowadays has been reduced by roughly one-third in the last three years, and this re- duction is far greater than that which has occurred in either the annual income from capital invested in the purchase of an annuity, or in the accumulation of savings through the medium of an endowment assurance policy.

The shrinkage of the income from invested savings has led many people to turn to annuity contracts as a means of obtaining an assured income for the remainder of their lives, and in those cases where it is not necessary to make provision for others an annuity is attractive. Even when income from invested capital has not dwindled the purchase of an annuity may be far more attractive now than it was a few years ago, without taking into account the greater age of the intending purchaser, for the capital values of investments have risen, on the average, by considerably more than the relative increase in the cost of an annuity through the re- adjustment of rates by the offices. The extent of the readjustment which has occurred since 1920, when interest rates were exceptionally high, may be seen from the figures set out below, showing the percentage yield on an annuity, if purchased at current rates, compared with those ruling in the 1920 period : Annuity per £100 of Purchase Money.

What are known as " Joint Life and Survivor An- nuities " are specially applicable to the case of two per- sons, either husband and wife, or two sisters, with no dependants, and having only a limited capital which brings in too small an. income for comfort. _ By the pur- chase of a joint life annuity a larger income-can be secured to both, and will continue until the death of the second. For instance, a husband and wife, both- aged 60, can obtain nearly 6k per cent. on their capital, to continue until the death of the second, a rate which will probably double their current income derived from gilt edged securities. If desired, the _annuity can . be arranged to decrease, say by one-third, on the death of the first, with, of course, a correspondingly higher income during the joint lives.

When we come to the question of investing through the medium of a Life Assurance Policy, we find that while the fall in interest rates has affected bonus prospects, it has still left the Life Policy with enhanced merits in relation to the rate of interest obtainable on ordinary Stock Exchange securities, and, of course, the non-profit con- tracts where the- benefits are guaranteed have only been affected to the extent to which premium rates may have been altered. The with-profits policy naturally requires a higher premium than the non-profit, and so for an equal premium payment provides a smaller immediate death. benefit, but the with-profits pOlicy increases, by the addi- tion of bonuses, and where investment is for a moderately long term—say, twenty years or longerthe with-profits policy undoubtedly offers the best bargain. In _a good bonus-paying office, a thirty years' Endowment Assurance policy taken out say at age 30, would represent on matu- rity an investment of the premiums, after deducting income tax relief, at about al- per cent. compound interest, and to give the same result with income tax at its same level it would be necessary for the policy holder.to invest his premiums to yield very nearly 4i per, cent. gross, and even so, of course, he would be forgoing any Life Assur ance benefit.

Investment in a non-profit EndOwinent .Assurance produces a capital sum at the end of the period which re- presents the accumulation of the net premiums at com- pound interest, free of income tax. A high rate of income tax therefore makes investment through the medium of an Endowment Assurance policy the more attractive, inasmuch as the result of the policy is not affected when it is under the non-profit scale, while the gross yields from ordinary investments of course suffer high deduc- tion. Not only so, but the rebate of income tax in respect of the premiums paid on the policy is increased when the tax goes up. Correspondingly, however, the relative attraction of the Life Policy is reduced as income tax falls, and as it is rather confidently anticipated that income tax will be reduced in the next Budget, the figures of equivalent gross return on Life policies tabulated below are calculated on the assumption of income tax at 4s. in the E ; that is to'say, rebate on the premiums is allowed for at 2s., and the gross rates of yield represented by the result of the policy are calculated from the actual net returns on the basis of tax at 4s. in the E. Even so, it will be seen that the yields on short term Endowment policies represent rates of interest which still provide very favourable comparisons with the results of an ordinary investment.

The above table brings out very clearly the extremely attractive nature of the short term non-profit Endowment Assurance from the investment standpoint, especially when taken out at an early age. As the age of the policy- holder advances, the amount of the premium absorbed in meeting the mortality risk becomes greater, but at the earlier ages the amount of the premium so absorbed is very small indeed. Nevertheless, the value of the Life Assurance cover to the policy-holder is by no means negligible, and he obtains his cover virtually without cost in the light of attractiveness of the policy as an investme nt.

The Endowment Assurance policy is sometimes criticized on the ground of its being a selfish contract taken out priinarily for the benefit of the policy-holder himself, rather than in the interest of his dependants, but if the policy is made the chief vehicle for savings, and thus taken out for a correspondingly large amount, its value for the purpose of protection of dependants is not impaired at all ; indeed, it may well be enhanced. And when it matures the money provided by it still remains an asset in the estate of the assured and, unless dissipated by him, will be available for the support of dependants or payment of death duties on his decease. The policy, has merely been paid before death instead