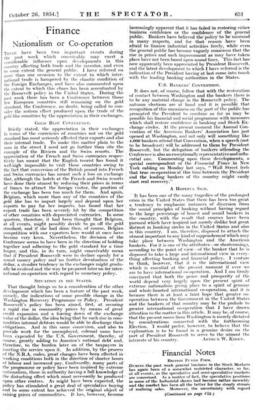 Nationalism or Co-operation- THERE have been two import ant events during the past week which conceivably may exert a considerable influence upon developments in this country affecting both trade and the investor, and even to some extent the general public. I have referred on more than one occasion to the extent. to which inter- national trade is hampered by the chaotic condition of the Foreign Exchanges, and have also commented upon the extent to which this chaos has been accentuated by the Roosevelt. policy in the United States. During the past week, there has been a Conference between those few European countries still remaining on the gold standard, the Conference, no doubt, being called to con- sider the serious' effect produced upon the trade of the gold bloc countries by the appreciation in their exchanges.

Briefly stated,- the appreciation in their exchanges in terms of the currencies of countries not on the gold standard has most seriously affected their exports and also their internal trade. To make this matter plain to the man in the street I need not go further than eite the example of the Riviera and the Swiss resorts. The appreciation of the French and Swiss currencies respec- fively has meant that the English tourist has found it well-nigh -impossible to visit those countries owing to the-fact that conversion of the British pound into French and Swiss currencies has Meant suefi a losS on exchange that, although the hotels at the French and Swiss resorts have done their utmost by reducing their prices in terms of francs to• attract the foreign visitor, the position of the exchange has been too much for them. And again, Belgium, which more than any of the countries of the gold bloc has to import largely and depend upon . her exports to pay for. her imports, has found that her export trade has been severely hit by the competition of other countries with depreciated currencies, In some quarters, therefore, it had been thought that Belgium, at all _.events, might possibly decide to go, off the gold standard, and if she had done then, of -course, Belgian competition with our exporters here would at once have become very keen. Nevertheless, the .decision of the Conference seems to have been in the direction of holding together and adhering- to 'the ;gold standard for a time longer,- and this, in its turn, might conceivably mean that if President Roosevelt-were to declare openly for' a sound money policy and' no further devaluation of the . dollar, a steadier tendency in the exchange's 'might gradu- iillrbe evolved and the way be prepared- later on for inter- national co-operation with regard to monetary policy. • SITUATION IN THE STATES.

That thought brings us to a ecinsideration of the other development which has been a feature of the past week, namely, the indications of some possible change in the Washington Recovery Progranune or Policy. President Roosevelt's policy has been aimed, first, at securing a rapid rise in commodity prices by means of great credit expansion and a forcing down of the exchange value of the dollar, the idea being that by such rise in com- modities internal debtors would be able to discharge their obligations. And in this same connexion, and also to provide work for the unemployed, colossal sums have been expended by the U.S. Government, thereby, of course, greatly adding to America's national debt and, therefore, to the burden later on of the taxpayers in meeting the service upon it. In addition, by the process of the 'N.R.A. codes, great' changes have been effected in working conditions both in the direction of shorter hours of labour and increased pay. Confessedly, many parts, of the. programme or policy have• been inspired 'by extreme nationalism, those in authority having a full knowledge of the disturbing effect which must necessarily be produced upon other centres. As might have been expected, the policy has stimulated a great deal of speculative buying and to some extent has achieved the original object of raising prices of commodities. It has, however, become increasingly apparent that it has failed in restoring either ' business confidence or the confidence of the general public. Bankers have believed the policy to be unsound in many. respects, and - for that reason have been afraid to finance industrial activities freely, while even the general public has become vaguely conscious that the rise in prices and such improvement as may have taken place have not been based upon sound lines. This fact has now apparently been appreciated by President Roosevelt, and the latest development to which I have referred is the indication of the President having at last come into touch with the leading banking authorities in the States.

It does not, of course, follow that with the restoration of contact between Washington and the bankers there is to be any material change in the Roosevelt policY. The autumn elections arc at hand and it is possible that recognition of this uneasiness on the part of the public has prompted the President to combine as far as may be possible his financial and social progranime with measures which shall restore confidence in banking and Stock Ex- change circles. At the present moment the Annual Con- vention of the American Bankers' Association has just opened at Washington, and not only will something like 4,000 bankers attend that Convention, when a speech (not to be broadcast) will be addressed to them by President Roosevelt, but the delegation of bankers-attending the Conference is also an exceptionally representative and influ- ential one. Commenting upon these 'developMents, a special correspondent of .the Financial Tithes in New York cabling on Monday last says, " Will Street feels that true co-operation at this time between the President and the leading -bankers of the country might 'easily start real recovery.".

It has been one of the many tragedies of the prolonged crisis in the United States that there has been too great a tendency to emphasize instances of diversion from the sound principles of banking withOut 'having regard to the large percentage-of honest and sound bankers in the-- country,- with the result that courses have .been pursued Which' have inspired not merely dislike -but great distrust in banking circles in the United States and also in this country.' I am, therefore, disposed to attach the utmost important to any kind of rapprochement which may take place between Washington and the American bankers. For it is one of the attributeS—or shortcomings, according to the point of view—of the banker that he is disposed to take a large and international view in every- thing affecting banking and financial policy. I venture to think, however, that it is the international view which is essential at the present moment if ever we are to have international co-operation. And I am firmly convinced that both the peace and prosperity of the world depend very largely upon the present spirit of extreme nationalism giving place to a spirit of genuine and whole-hearted international co-operation, and it is because there is at least a faint hope that greater co- operation between the Government in the United States and the bankers of that country may be the prelude to greater international co-operation that I have, drawn attention to the matter in this article. It may be, of course, that the present move from Washington is merely dictated by considerations connected with the forthcoming Election. I would prefer, however, to believe that the explanation is to be found in a genuine desire on the part of President Roosevelt to serve to the utmost the