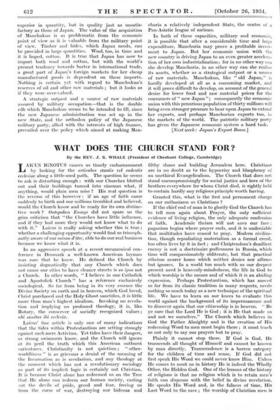 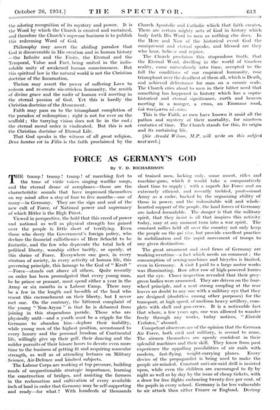 WHAT DOES THE CHURCH STAND FOR ?

LAICUS IGNOTUS causes us timely embarrassment by looking for the articulus et antis vel cadentis ecclesiae along a little-used path. The question he seems to ask is disturbing enough : with our Churches blotted out and their buildings turned into cinemas what, if anything, would plain men miss ? His real question is the reverse of this however : if an age of faith came suddenly to birth and our millions trembled and believed, would the Church know and be ready for its own distinc- tive work ? Outspoken Essays did not spare us the grim criticism that "the Churches have little influence, and if they had more they would not know what to do with it." Laicus is really asking whether this is true ; whether a challenging opportunity would find us triumph- antly aware of our raison d'etre, able to do our real business because we know what it is.

In an aggressive speech at a recent oecumenical con- ference in Denmark a well-known American layman was sure that he knew. He defined the Church by insisting dogmatically that any Church which does not cause our cities to have cleaner streets is eo ipso not a Church. In other words, " I believe in one Catholick and Apostolick Church " has a • reference exclusively sociological. So far from being in its very essence the Divine Society on earth and in heaven, which God loved, Christ purchased and the Holy Ghost sanctifies, it is little More than man's highest idealism. Invoking no revela- tion and implying no profound theology, it is, like Rotary, the conserver of socially recognized values ; ltbi sanitas ibi ecclesia.

Laicus' fine article is only one of many indications that the tides within Protestantism are setting strongly against such mere Activism. Yet tides have their dangers, as strong swimmers know, and the Church will ignore at its peril the truth which this American outburst caricatures. Christianity is not quietism ; " other- worldliness " is as grievous a denial of the meaning of the Incarnation as is secularism, and any theology at the moment which has not a revolutionary sociology as part of its implicit logic is certainly not Christian. It is because Christ alone has redeemed us on the Tree that He alone can 'redeem our human 'society, casting out the devils of pride, greed and fear, freeing us from the curse of war, destroying our hideous and filthy slums and building Jerusalem here. Christians are in no doubt as to the hypocrisy and blasphemy of an unethical Evangelicalism. The Church that does not stand uncompromisingly for social justice and love of the brothers everywhere for whom Christ died, is rightly held to contain hardly any religious principle worth having.

Granted this, what is the first and permanent charge on our enthusiasm as Christians ?

If the chief end of man is to glorify God the Church has to tell men again about Prayer, the only sufficient evidence of living religion, the only adequate confession of faith. Academic theism will not save our face ; paganism begins where prayer ends, and it is undeniable that multitudes have ceased to pray. Modern civiliza- tion, though repudiating materialism as a formal creed, too often lives by it in fact ; and Christendom's deadliest enemy is not a doctrinaire godlessness in Russia, which time will compassionately obliterate, but that practical atheism nearer home which neither denies nor affirms but ignores. In a world too much with us our deepest present need is heavenly-mindedness, the life in God to which worship is the means and of which it is an abiding expression. Perhaps Protestantism, which has moved so far from its classic tradition in many respects, needs nothing so much today as a new technique of the spiritual life. We have to learn on our knees to evaluate this world against the background of its impermanence and to discover again that our citizenship is in heaven. " Be ye sure that the Lord He is God ; it is He that made us and not we ourselves." The Church which believes in God the Father Almighty and is the creation of His redeeming Word to men must begin there ; it must teach us not only to say our prayers but to pray.

Plainly it cannot stop there. If God is God, He transcends all thought of Himself and cannot be known by man directly. Transcendence is a barren category for the children of time and sense. If God did not first speak His Word we could never know Him. Unless He comes to meet us in history He is indeed the Wholly Other, the Hidden God. One of the lessons of the history of religions is that no religion which is to retain men's faith can dispense with the belief in divine revelation. He speaks His Word and, in the fulness of time, His Last Word to the race ; the worship of Christian men is the adoring recognition of its mystery and power. It is the Word by which the Church is created and sustained, and therefore the Church's supreme business is to publish this redeeming Word of God.

Philosophy may assert the abiding paradox that God is discoverable in His creation and in human history —the Infinite and the Finite, the Eternal and the Temporal, Value and Fact, being united in the indis- soluble unity of awakened human consciousness. But this spiritual law in the natural world is not the Christian doctrine of the Incarnation.

Theism may assert the power of suffering Love to redeem and re-create sin-stricken humanity, the zenith of divine grace and the nadir of human evil meeting in the eternal passion of God. Yet this is hardly the Christian doctrine of the Atonement.

Faith may pass on to the triumphant completion of the paradox of redemption ; right is not for ever on the scaffold ; the tarrying vision does not lie in the end ; the eternal moral order is vindicated. But this is not the Christian doctrine of Eternal Life.

That God speaks is the witness of all great religion. Deus locutus est in Filio is the faith proclaimed by the Church Apostolic and Catholic which that faith creates. There are certain mighty acts of God in history which body forth His Word to men as nothing else does. In the here and Now of the historical event God the omnipresent and eternal speaks, and blessed are they who hear, belie c e and rejoice.

The Church proclaims this stupendous truth, that the Eternal Word, dwelling in the world of timeless reality, came miraculously into time, accepted to the full the conditions of our empirical humanity, rose triumphant over the deadliest of them all, which is Death, and achieved deliverance for man on a cosmic scale. The Church cries aloud to men in their bitter need that something has happened in history which has a supra- historical and eternal significance, earth and heaven meeting in a manger, a cross, an Emmaus road, zea irvetiparoc aL,viou.

This is the Faith, as men have known it amid all the pathos and mystery of their mortality, for nineteen centuries of time. The Church stands for this, its origin and its sustaining life.

[Sir Arnold Wilson, M.P. will write on this subject next week.]