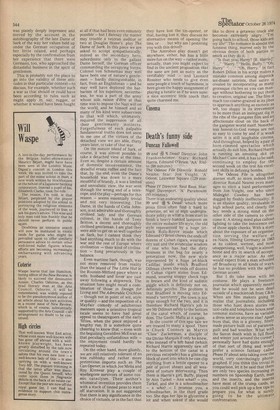 There is an endearing quality about 99 and rAi % Dead! which more pious films often find it hard to generate, an air of nigh undergraduate jollity in what is from start to finish a heavy-handed lampoon on the entire mobster life style, the old style represented by a huge jetblack Rolls-Royce in-side which Edmund O'Brien chews the ends off dozens of Cuban cigars, wearing a city suit and the avuncular wisdom of one who has had the dirty business in the bag for nearly a generation now, the new style represented by a huge jet-black Cadillac inside which Bradford Dillman chews the ends off dozens of Cuban cigars stolen from Edmund, wearing snappy check togs in brown and the kind of sadistic giggle which is definitely not on, definitely psycho. The problem is that Bradford is moving into Edmund's terryterry' the town is not large enough for the two, and it is therefore Richard Harris's job to see Mr Dillman safely to the bottom of the canal which, of course, he does. The Gaelic Mafia at it again.

In the course of this epic tale we are treated to many a spoof. There is Chuck Connors as Marvin "Claw" Zuckerman, a disciple of the Divine Marquis if only he knew, who instead of 'a left hand (which Richard Harris apparently saw off to the bottom of the canal in a previous escapade) has a glittering block of steel into which he can clip anything from a bottle opener to a pair of privet shears and all weapons of torture intervening. Then there is Harris's girl, Buffy, played by Ann Turkel — Ann what? — yes, Turkel, and she is a schoolteacher — a who? — I promise you, a schoolteacher, in the third grade too. She dips her lips in glycerine a lot and when asked if she would

like to drive a getaway truck she becomes extremely angry. "I'm going back to school, those kids are my life!" The romance is almost the funniest thing, marred only by the obvious desire of both parties to smirk as they do it. "Is that you, Harry? [R. Harris] ". . ." "Harry." "Hello, Buffy." "Oh, Harry" ". . ." "Oh, Harry." In fact Robert Dillon in his script makes a mistake common among slapstick soi-disant satirists, that satire is created by incorporating as many •

grotesque cliches as you can manage without bothering to put them to creative, original use. The film is much too coarse-grained in its jibes to approach anything as esoteric as wit, too sloppy in its irreverence

affectionate clout on the back of

the gangster world itself. Nonetheless honest-to-God romps are not,

so easy to come by and if is weak satire it is still laughable cinema. And throughout, helped by a pair of horn-rimmed spectacles which actually do suit him, Richard Harris is running an amusing skit on Michael Caine and, it has to be said, continuing to employ for the second week on the trot his excellent skills in defusing bombs.

The Odessa File is altogether sterner stuff, so stern indeed that

director Ronald Neame even man ages to elicit a hard performance from Jon Voight, one who since

Midnight Cowboy has been dogged by fleshly ineffectuality. It is an elusive quality, invaluable

high school parts, and clearly the boy needs a strong mind on the

other side of the camera to over

come it. A strong mind plus callous lighting to take the innocence out of those apple cheeks. With a storY

about the exposure of an organisation serving the welfare of

ex-Nazis, filming Germany in 1963 at its coldest, wettest, and most unappetising, well, Voight is almost

home and dry in search of accept

ance as a major actor. As one would expect from a man schooled off Broadway in all kinds of ways, he has no problem with the spitty German accent. But I do take issue with his costume. He plays a freelance journalist which apparently means that he would not be seen dead outside of a mackintosh from C&A. When are film makers going t° realise that journalists, including those who hunt down stories via taxi-cabs and telephone boxes near terminal stations, have as variable a dress sense as anyone else? Apart from that, this is a gloomy, finely

made picture built out of paranoia,

guilt and bad weather. What with the Saxon death wish in full flood and winter just around the corner I personally have had quite enough of that sort of thing and would prefer a science fantasy called

Phase IV about ants taking over the world, very convincingly photographed. If you think this trivial in comparison, let it be said that there

are only two species increasing el

numbers on Spaceship Earth, mall and the insects, and the insects have most of the trump cards, so you could well pick up a few tips to prepare you for what is surelY going to be the ultimate confrontation.