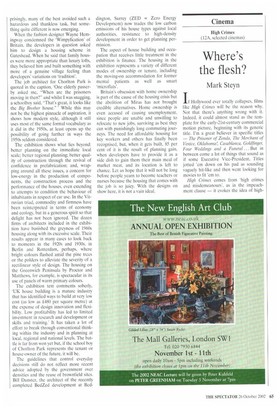 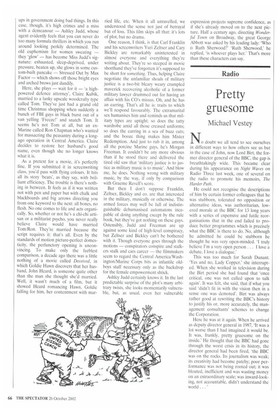 If Hollywood ever totally collapses, films like High Crimes will be the reason why. Not that there's anything wrong with it. Indeed, it could almost stand as the template for the early-21st-century commercial motion picture, beginning with its generic title. I'm a great believer in specific titles — The Prisoner of Zenda, The Merchant of Venice, Oklahoma!, Casablanca, Goldfinger, Four Weddings and a Funeral. . . But in between come a lot of things that sound as if some Executive Vice-President. Titles jotted 'ern down on his pad as sounding vaguely hit-like and then went looking for movies to fit 'em to.

High Crimes comes from 'high crimes and misdemeanours', as in the impeachment clause — it evokes the idea of high ups in government doing bad things. In this case, though, it's high crimes and a miss with a demeanour — Ashley Judd, whose agent evidently feels that you can never do too many formula thrillers in which you run around looking perkily determined. The old euphemism for women sweating — they 'glow' — has become Miss Judd's signature: exhausted, sleep-deprived, under pressure, beaten up, she glows in some custom-built pancake — Stressed Out by Max Factor — which shows off those bright eyes and arched brows just dandily.

Here, she plays — wait for it — 'a highpowered defence attorney', Claire Kubik, married to a lanky upscale woodcrafty type called Tom. They've just had a grand old time Christmas shopping when suddenly a bunch of FBI guys in black burst out of a van yelling 'Freeze!' and snatch Tom. It seems he's not Tom at all, but an exMarine called Ron Chapman who's wanted for massacring the peasantry during a longago operation in Central America. Claire decides to restore her husband's good name, even though she no longer knows what it is.

As a pretext for a movie, it's perfectly fine. If you submitted it in screenwriting class, you'd pass with flying colours. It hits all its story 'beats', as they say, with brilliant efficiency. The trouble is there's nothing in between. It feels as if it was written not with pen and paper but with chalk and blackboards and big arrows directing you from one keyword to the next: all bones, no flesh. No one comes to life and acts organically. So, whether or not he's a chi-chi artisan or a militarist psycho, you never really believe Claire would have married Tom/Ron. They're married because the script requires it: that's all. Even by the standards of motion picture-perfect domesticity, the perfunctory opening is unconvincing. To make only the feeblest comparison, a decade ago there was a little nothing of a movie called Deceived, in which Goldie Hawn discovers that her husband. John Heard, is someone quite other than the man she thought she'd married. Well, it wasn't much of a film, but it showed Heard romancing Hawn, Goldie falling for him, her contentment with mar

ried life, etc. When it all unravelled, we understood the sense not just of betrayal but of loss. This film skips all that: it's lots of plot, but no drama.

One reason, I think, is that Carl Franklin and his screenwriters Yuri Zeltser and Cary Bickley are remarkably uninterested in almost everyone and everything they're writing about. They're so steeped in movie shorthand they've forgotten it's supposed to be short for something. Thus, helping Claire negotiate the unfamiliar shoals of military justice is a two-bit bleary weary crumpled maverick recovering alcoholic of a former military lawyer drummed out for having an affair with his CO's missus. Oh, and he has an earring. That's all he is: traits to which we'll respond favourably. The extramarital sex humanises him and reminds us that military types are uptight; so does the tatty wardrobe amid all those creased uniforms; so does the earring in a sea of buzz cuts; and the booze thing makes him Mister Redemption. And just to rub it in, among all the porcine Marine guys, he's Morgan Freeman. It couldn't be any more obvious than if he stood there and delivered the tired old saw that 'military justice is to justice as military music is to music'. And blow me, he does. Nothing wrong with military music, by the way, if only by comparison with Graeme Revell's score.

But then I don't suppose Franklin, Zeltser, Bickley and co. are that interested in the military, musically or otherwise. The armed forces may well be full of indistinguishable dehumanised automatons incapable of doing anything except by the rule book, but they've got nothing on these guys. Ostensibly, Judd and Freeman are up against some kind of high-level conspiracy, but Zeltser and Bickley can't be bothered with it. Though everyone goes through the motions — conspirators conspire and stalkers stalk and cars career — the filmmakers seem to regard the Central America/Washington/Marine Corps bits as infantile oldboys stuff necessary only as the backdrop for the female empowerment shtick.

Ashley Judd certainly knows it. In the last predictable surprise of the plot's many arbitrary twists, she looks momentarily vulnerable, but. as usual, even her vulnerable

expression projects supreme confidence, as if she's already moved on to the next picture. Half a century ago, directing Wonderful Town on Broadway, the great George Abbott was asked by his leading lady: 'Who is Ruth Sherwood?' Ruth Sherwood,' he replied, 'is whoever plays her.' That's more than these characters can say.