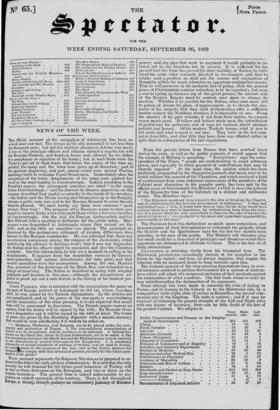 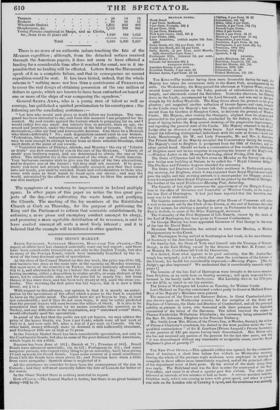 Page 1, 26 September 1829 — From the private letters from France that have reached town
Close

From the private letters from France that have reached town

during the week, as well as the public journals, it would appear that the example of Brittany is spreading. " Everywhere," says the corre- spondent of the Times, " people are confederating to resist arbitrary power, and especially to refuse payment of contributions that may be illegally imposed." At the same time, the opinion which has been studiously propagated by the Opposition journals, that taxes were to be levied without the consent of the Chambers, and which received a kind of countenance from some indiscreet expressions of the members of the Cabinet most obnoxious to the popular party, has been met by the official organ of Government, the Moniteur, (which is more the journal of the Monarchy than of the Cabinet) by a distinct and deliberate denial. The Moniteur says- " The Ministers could not even conceive the idea of breaking the Charter, and of substituting for the laws the government of ordinances. If they had entertained such a wish, it would have been in vain, for the King would have reduced them to a state of impotence, by withdrawing from them the exer- cise of a power which he only committed to them for the sake of having the administration of u!' tit's conducted in his name and upon their responsibility, conformably to the laws."

The Parisians treat this declaration as made upon compulsion, and in consequence of their determination to withstand the projects which the Gazette and the Quotidienne have for the last two months been sounding in the ears of the public. The Ministry will therefore gain but small credit for a disavowal of principles and intentions which their opponents are determined to attribute to them. This is the-fate of all tardy retractations. LAFAYETTE is returning slowly from his triumphal tour. The Ministerial journals are exceedingly furious at his reception in the towns he has visited ; and thus, as always happens, they inspire the Liberals with an increased desire to heap honours upon him.

The Consuls-general of the wine-growing departments have in seve- ral instances resolved to petition Government for a system of custom- laws which will admit of a reciprocal exchange of their products against the commodities of other countries. The free trade seems to work its way notwithstanding the declamation of its opponents. Some attempt has been made to ascertain the state of feeling in France, and its leaning to the Liberal or to the Ministerial side, by a comparative table of Jhe state of parties in Marseilles, the second com- mercial city of the kingdom. The table is curious ; and if it may be received as indicating the general strength of the Left and Right sides with any degree of accuracy, there can be little doubt of the fate of the present Cabinet. We subjoin it. Total Right Left number. side, side.