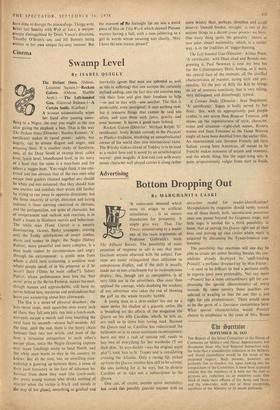 The Defiant Ones. (Odeon, Leicester Square.)—Rockets Galore. (Odeon, Marble Arch.) — The Left-handed Gun. (General Release.)—A Certain Smile. (Carlton.) A WOMAN automatically wipes her hand after passing some- thing to a Negro, the way you might at the zoo after giving the elephant a bun. That is the way The Defiant Ones (Director : Stanley Kramer; 'A' certificate) makes its racial points: subtly, but angrily, out to arouse disgust and anger, and arousing theM. It is another study of Southern- ness, of the Deep South at swamp level, cabin level, lynch level, bloodhound level, in the story of a hunt that for some is a man-hunt and for others a 'nigger-hunt.' You might think it too con- trived and too obvious that of the two men who escape their gaolers chained together one should be white and one coloured; that they should hate one another and mutilate their wrists still further by trying to run away in opposite directions; but the fierce sincerity of script, direction and acting redeems it from seeming contrived or obvious, and the juxtaposition, not quite of character, but of temperament and outlook and reaction, is in itself a lesson in Sbuthern morals and behaviour. The white man (Tony Curtis) is a meanly domineering, vicious, flashy youngster, craving only the Teddy satisfactions of smart clothes, stares and money to jingle; the Negro (Sidney Poitier), more powerful and more complex, is a man made violent by circumstances and angry through his environment : a gentle man from Whom a child runs screaming, a sensitive man Whom people speak of in his presence as if he wasn't there ('Does he want coffee?'). Sidney Poitier, whose performance won him the 'best actor' prize at the Berlin Festival, makes the man, though human and approachable, still have re- serves behind him, mysteries and profundities that leave you wondering about him afterwards.

The film is a series 'of physical disasters: the rain never stops, mud squelches over every inch of them, they fall into pits, run into a lynch-mob, narrowly escape a marsh and miss boarding the vital train by seconds—almost half-seconds. All the time, until the end, there is the heavy chain between their two raw wrists, and most of the time a ferocious antagonism to each other's escape plans, since the Negro (knowing capture may mean lynching) wants to head North, and the white man wants to stay in the country he knows. But all the time, too, an unwilling com- radeship is growing up between them, a sense of their joint humanity in the face of inhuman be- haviour from those they meet (the lynch-mob; the pretty young woman who thinks nothing of murder when the victim is black and stands in the way of her plans), something so gradual and inevitable (given that men are splendid as well as vile in suffering) that one accepts the curiously stylised ending, and the fact that old enemies may risk their lives and give their freedom to help —or just to stay with—one another. The film is predictable, even unoriginal; it says nothing new, but it reasserts things that cannot be said too often, and says them with force, gravity and even humour. It leaves a good taste behind.

Rockets Galore (Director : Michael Relph; certificate): lively British comedy in the Passport to Pin►lico tradition, involving an unsophisticated corner of the world shot into international fame. The Whisky Galore island of Todday is to be used as a rocket base and is saved by an ornithological marvel : pink seagulls. A first-rate cast with every minor character well played carries it along rather more briskly than, perhaps, direction and script deserve; Donald Sinden, 'straight,' is one of the nearest things to a decent :wrte premier we have. One nasty thing spoils the geniality : sneers at (not jokes about) nationality, which, in a milder way, is in the tradition of 'nigger-hunting.'

The Left-handed Gun (Director : Arthur Penn; 'A' certificate): with Dean dead and Brando out- growing it, Paul Newman is now my best bet for the Contemporary Hero, having, as it were, the central face of the moment, all the distilled characteristics of manner, acting style and per- sonality. To the part of Billy the Kid he brings an air of moronic sensitivity that is very telling, very delinquent and disturbingly typical.

A Certain Smile (Director : Jean Negulesco; 'A' certificate): Sagan is badly served by her films: this, with its appropriately pale purple credits, is one worse than Bonjour Tristesse, and shows up the repetitiveness of style, character, scene and situation—night-club scenes, Riviera scenes and Joan Fontaine as the Good Woman might all have been doubled from the earlier film. An international cast (heroine French. old hero Italian, young hero American, all meant to be French) makes nonsense of accent and manners, and the whole thing, like the sugar-icing sets, is quite preposterously vulgar from start to finish.