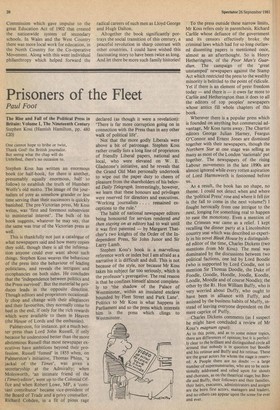 Prisoners of the Fleet

The Rise and Fall of the Political Press in Britain: Volume I, The Nineteenth Century Stephen Koss (Hamish Hamilton, pp. 480 £20)

One cannot hope to bribe or twist, Thank God! the British journalist. But seeing what the chap will do Unbribed, there's no occasion to.

Stephen Koss has written an enormous book (or half-book, for there is another, presumably equally enormous, half to follow) to establish the truth of Humbert Wolfe's old motto. The image of the journalists of yore as somehow grander or less time serving than their successors is quickly banished. The pre-Victorian press, Mr Koss writes, was 'first and foremost subservient to ministerial interest'. The bulk of his book suggests, whatever he may say, that the same was true of the Victorian press as well.

This is thankfully not just a catalogue of what newspapers said and how many copies they sold, though there is all the information anyone could ever want about such things. Stephen Koss weaves the behaviour of the press into the behaviour of leading politicians, and reveals the intrigues and sycophancies on both sides. He concludes that the 'independence between politics and the Press survived'. But the material he produces leads in the opposite direction. Though editors and proprietors occasionally chop and change with their allegiances and their favourites, they normally come to heel in the end, if only for the rich rewards which were available to them in Heaven (the House of Lords and the embassies).

Palmerston, for instance, got a much better press than Lord John Russell, if only because he understood better than the more abstemious Russell that most newspaper executives have ambitions beyond their profession. Russell 'fumed' in 1855 when, on Palmerston's initiative, Thomas Phinn, 'a jackal of the Times', was given a secretaryship at the Admiralty; when Molesworth, 'an intimate friend of the (Times) editor', went up to the Colonial Office and when Robert Lowe, MP, a 'constant contributor' became vice-president of the Board of Trade and a privy counsellor. Richard Cobden, in a fit of pious rage declared (as though it were a revelation): 'There is far more corruption going on in connection with the Press than in any other walk of political life'.

Not that the more godly Liberals were above a bit of patronage. Stephen Koss rather cruelly lists a long line of proprietors of friendly Liberal papers, national and local, who were elevated on W. E. Gladstone's initiative, and he reveals that the Grand Old Man personally undertook to wipe out the paper duty to cheers of pleasure from the shareholders of his beloved Daily Telegraph. Interestingly, however, we learn that these honours and privileges were reserved for directors and executives. 'Working journalists . . . . remained exceptions to the rule.'

The habit of national newspaper editors being honoured for services rendered and then staying on as editors had to wait until it was first patented — by Margaret Thatcher's two knights of the Order of the Independent Press, Sir John Junor and Sir Larry Lamb.

Stephen Koss's book is a marvellous reference work or index but I am afraid as a narrative it is difficult and dull. This is not because of the style, nor because Mr Koss takes his subject far too seriously, which is the professor's prerogative. The real reason is that he confines himself almost completely to 'the shadow of the Palace of Westminster, within an insulated enclave bounded by Fleet Street and Park Lane'. Politics to Mr Koss is what happens in Parliament and so the press which interests him is the press which clings to Westminster. To the press outside these narrow limits, Mr Koss refers only in parenthesis. Richard Carlile whose defiance of the government and its censors effectively broke the criminal laws which had for so long outlawed dissenting papers is mentioned once, almost as an afterthought. So is Henry Hetherington, of the Poor Man's Guardian. The campaign of the 'great unstamped' newspapers against the Stamp Act which restricted the press to the wealthy minority is belittled to the point of ridicule. Yet if there is an element of press freedom today — and there is — it owes far more to Carlile and Hetherington than it does to all the editors of top peoples' newspapers whose antics fill whole chapters of this book.

Wherever there is a popular press which is founded on anything but commercial advantage, Mr Koss turns away. The Chartist editors George Julian Harney, Feargus O'Connor and Ernest Jones are dismissed together with their newspapers, though the Northern Star at one stage was selling as many as most of the London 'nationals' put together. The newspapers of the rising Labour movements in the late 1890s are almost ignored while every rotten aspiration of Lord Harmsworth is festooned before us.

As a result, the book has no shape, no theme. I could not detect when and where the 'political Press' rose and where it fell (or is the fall to come in the next volume?) I fought heroically from one intrigue to the next, longing for something real to happen to ease the monotony. Even a mention of the Crimean war came as a relief. I kept recalling the dinner party at a Lincolnshire country seat which was described so expertly in his novel Bleak House by a distinguished editor of the time, Charles Dickens (two mentions from Mr Koss). The meal was dominated by the discussions between two political factions, one led by Lord Boodle (who is supported by Lord Coodle, not to mention Sir Thomas Doodle, the Duke of Foodle, Goodie, Hoodle, Joodle, Koodle, Loodle, Moodie and of course Noodle); the other by the Rt. Hon William Buffy, who is very worried about Duffy, who ought to have been in alliance with Fuffy, and assisted by the business habits of Muffy, instead of leaving everyone dependent on the mere caprice of Puffy.

Charles Dickens comments (as I suspect he might have concluded a review of Mr Koss's magnum opus): As to this point, and as to some minor topics, there are differences of opinion; but it is perfectly clear to the brilliant and distinguished circle all around that nobody is in question but Boodle and his retinue and Buffy and his retinue. These are the great actors for whom the stage is reserved. A People there are no doubt — a large number of supernumeraries, who are to be occasionally addressed and relied upon for shouts and choruses, as on the theatrical stage; but Boodle and Buffy, their followers and their families, their heirs, executors, administrators and assigns are the born first actors, managers and leaders, and no others can appear upon the scene for ever and ever.