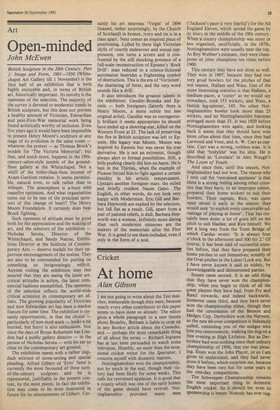 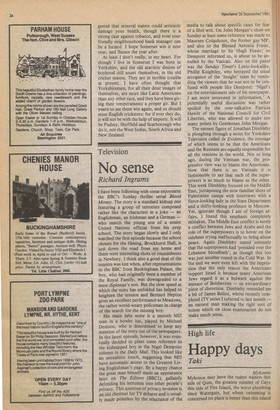 I am not going to write about the Test matches, memorable though they were, because nearly every other contributor to this paper seems to have done so already. The editor gives a whole paragraph to a new theory about Brearley, Botham is liable to crop up in any Booker article about the Cossacks, and — perhaps the most remarkable thing of all about the series — Richard Ingrams has at last been persuaded to watch some television. Humbly, no more than the occasional cricket writer for the Spectator, I concern myself with domestic matters. Nottinghamshire won the championship, not by much in the end, though their victory had been likely for some weeks. This calls for restrained applause. It is good that a county which was one of the early homes of the game should have revived. Nottinghamshire provided many men (`Jackson's pace is very fearful') for the All England Eleven, which spread the game by its tours in the middle of the 19th century. When a county championship was more or less organised, unofficially, in the 1870s, Nottinghamshire were usually near the top. At Roy Webber's estimate, they were champions or joint champions ten times before 1900.

This century they have not done so well. They won in 1907, because they had two very good bowlers for the pitches of that wet season, Hallam and Wass. One of the more interesting statistics is that Hallam, a medium-pacer, a 'cutter' as we would say nowadays, took 153 wickets, and Wass, a fastish leg-spinner, 145. No other Nottinghamshire bowler took more than 25 wickets, and no Nottinghamshire batsman averaged more than 33. It was 1929 before Nottinghamshire won again, and looking back it seems that they should have won more often about that time, since they had Larwood and Voce, and A. W. Carr as captain. Carr was a strong, ruthless man. It is said that `bodyline' was his idea. He is described as 'Lovelace' in Alec Waugh's The Loom of Youth.

And since then, until this season, Nottinghamshire had not won. The reason why I only call for 'restrained applause' is that there is a strong feeling among other counties that they have, to an improper extent, prepared their home wickets to suit their bowlers. Their captain, Rice, was quite open about it early in the season: they would seek `to exploit every conceivable advantage of playing at home'. That has certainly been done: a lot of grass left on the pitch to suit Hadlee, and Rice himself. We are a long way from the Trent Bridge of which Cardus wrote: 'It is always four o'clock in the afternoon and 300 for 2.' Of course, it has been said of successful counties before, that they have prepared their home pitches to suit themselves; notably of the Oval pitches in the Laker/Lock era. But I have never known it said so widely, by knowledgeable and disinterested parties.

Sussex came second. It is an odd thing that they have never won the championship, when you begin to think of all the great players they have had, from Fry and Ranji onwards, and indeed backwards. Somerset came third, and they have never won the championship either, though they had the consolation of the Benson and Hedges Cup. Derbyshire won the Natwest, as the new 60-over competition is hideously called, reminding you of the midges who bite you remorselessly, walking the dog on a fine evening at High Littleton. But as Derbyshire had won nothing since their solitary Championship of 1936, that too was pleasing. Essex won the John Player, or so I am given to understand, and they had never done it before, which surprises me, because they have been very hot for some years in the one-day competitions. The Schweppes Championship remains the most important thing in domestic English cricket. So it should be; even its sponsorship is better. Nobody has ever sug gested that mineral waters could seriously damage your health, though there is a strong case against tobacco, and even your friendly neighbourhood bank manager can be a hazard. I hope Somerset win it next year, and Sussex the year after.

At least I don't really, in my heart. For though I live in Somerset I was born in Yorkshire, and the old atavistic desires of boyhood still assert themselves, in the old cricket season. They are in terrible trouble at present. I have often thought that Yorkshiremen, for all their dour images of themselves, are more like Latin Americans than any other race, and they have been giving their temperaments a proper go. But I yearn to see them win again, and so should most English cricketers: for if ever they do, it will not be with the help of imports. It will be Pudsey, Sheffield and Scarborough who do it, not the West Indies, South Africa and New Zealand.