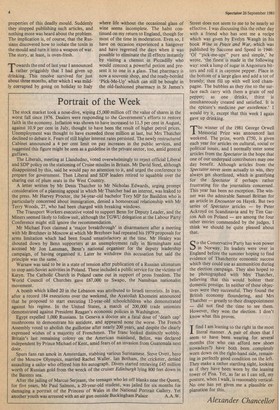 The stock market took a nose-dive, wiping £5,000 million off the value of shares in the worst fall since 1976. Dealers were responding to the Government's efforts to restore faith in the economy. Inflation was shown to have increased to 11.5 per cent in August, against 10.9 per cent in July, thought to have been the result of higher petrol prices. Unemployment was thought to have exceeded three million at last, but Mrs Thatcher declined to debate it. Fears of still higher interest rates persisted. The newly restructured Cabinet announced a 4 per cent limit on pay increases in the public services, and suggested this figure might be seen as a guideline in the private sector, too, amid general guffaws.

The Liberals, meeting at Llandudno, voted overwhelmingly to reject official Liberal and SDP policy on the stationing of Cruise missiles in Britain. Mr David Steel, although disappointed by this, said he would pay no attention to it, and urged the conference to prepare for government. Then Liberal and SDP leaders retired to squabble over the sharing out of plum seats in the West Country.

A letter written by Mr Denis Thatcher to Mr Nicholas Edwards, urging prompt consideration of a planning appeal in which Mr Thatcher had an interest, was leaked to the press. Mr Harvey Proctor, the 34-year-old bachelor Tory MP for Basildon who is particularly concerned about immigration, denied a homosexual relationship with Mr Terry Woods, 27, who had been charged with breaking windows.

The Transport Workers executive voted to support Benn for Deputy Leader, and the Miners seemed likely to follow suit, although the TGWU delegation at the Labour Party Conference might still ignore the recommendation.

Mr Michael Foot claimed a 'major breakthrough' in disarmament after a meeting with Mr Brezhnev in Moscow at which Mr Brezhnev had repeated his 1979 proposals for arms limitation which had been found unsatisfactory at the time. Mr Healey was shouted down by Benn supporters at an unemployment rally in Birmingham and accused Mr Jon Lansman, Benn's national organiser for the deputy leadership campaign, of having organised it. Later he withdrew this accusation but said the principle was the same.

Warsaw was said to be in a state of tension after publication of a Russian ultimatum to stop anti-Soviet activities in Poland. These included a public service for the victims of Katyn. The Catholic Church in Poland came out in support of press freedom. The World Council of Churches gave £67,000 to Swapo, the Namibian nationalist movement.

A bomb which killed 20 in the Lebanon was attributed to Israeli terrorists. In Iran, after a record 184 executions over the weekend, the Ayatollah Khomeini announced that he proposed to start executing 12-year-old schoolchildren who demonstrated against his regime. In the United States, a march of 200,000 trade unionists demonstrated against President Reagan's economic policies in Washington.

Egypt expelled 1,000 Russians. In Geneva a doctor ate a fatal dose of 'death cap' mushrooms to demonstrate his antidote, and appeared none the worse. The French Assembly voted to abolish the guillotine after nearly 200 years, and despite the clearly expressed wishes of a majority of Frenchmen. The franc looked distinctly wobbly. Britain's last remaining colony on the American mainland, Belize, was declared independent by Prince Michael of Kent, amid fears of an invasion from Guatemala next door.

Spurs fans ran amok in Amsterdam, stabbing various Surinamese. Steve Ovett, hero of the Moscow Olympics, married Rachel Waller. Ian Botham, the cricketer, denied assaulting a sailor who offered him his autograph. Divers started retrieving £45 million worth of Russian gold from the wreck of the cruiser Edinburgh lying 800 feet down in the Barents sea.

After the jailing of Marcus Serjeant, the teenager who let off blanks near the Queen, for five years, Mr Paul Salmon, a 20-year-old student, was jailed for six months for damaging a portrait of the Princess of Wales in the National Portrait Gallery. Yet another youth was arrested with an air gun outside Buckingham Palace A.A.W.