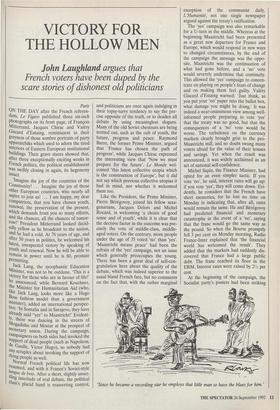 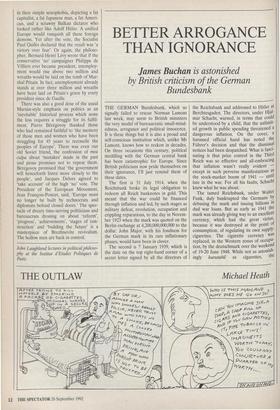 VICTORY FOR THE HOLLOW MEN

Paris ON THE DAY after the French referen- dum, Le Figaro published three six-inch photographs on its front page, of Francois Mitterrand, Jacques Chirac and Valery Giscard d'Estaing, reminiscent in their greyness of those sombre portraits of party apparatchiks which used to adorn the tired interiors of Eastern European institutional buildings. Their grave stares showed that, after three exceptionally exciting weeks in French politics, the political establishment was swiftly closing in again, its hegemony intact.

`Imagine the joy of the countries of the Community! ... Imagine the joy of those other European countries, who nearly all aspire to join us! ... I am happy, my dear compatriots, that you have chosen youth, renewal, the preservation of the present, which demands from you so many efforts, and the chances, all the chances of tomor- row!' President Mitterrand looked decid- edly yellow as he broadcast to the nation, and he had a cold. At 76 years of age, and after 50 years in politics, he welcomed his latest, unexpected victory by speaking of Youth and renewal. Now he will be able to remain in power until he is 80, prostate Permitting. Jack Lang, the sycophantic Education Minister, was not to be outdone. 'This is a victory for those who are in favour of life!' he announced, while Bernard Kouchner, the Minister for Humanitarian Aid (who, like Jack Lang, looks more like a Hugo Boss fashion model than a government minister), added an international perspec- tive: In Somalia and in Sarajevo, they have already said "yes" to Maastricht!' Evident- 1Y, there was dancing in the streets of Mogadishu and Mostar at the prospect of monetary union. During the campaign, campaigners on both sides had invoked the support of dead people (such as Napoleon, de Gaulle, Victor Hugo), so nobody had any scruples about invoking the support of dYmg people as well. Normal French political life has now resumed, and with it France's Soviet-style larigue de bois. After a short, slightly unset- tling interlude of real debate, the political Class's placid hand is reasserting control, and politicians are once again indulging in their topsy-turvy tendency to say the pre- cise opposite of the truth, or to deaden all debate by using meaningless slogans. Many of the old Soviet chestnuts are being trotted out, such as the cult of youth, the future, progress and peace. Raymond Barre, the former Prime Minister, argued that 'France has chosen the path of progress', while Jacques Chirac expressed the interesting view that 'Now we must prepare for the future'. Le Monde wel- comed 'this latest collective utopia which is the construction of Europe', but it did not say which previous collective utopias it had in mind, nor whether it welcomed them too.

Like the President, the Prime Minister, Pierre Beregovoy, joined his fellow sexa- genarians, Jacques Delors and Michel Rocard, in welcoming 'a choice of good sense and of youth', while it is clear that the decisive factor in the outcome was pre- cisely the vote of middle-class, middle- aged voters. On the contrary, more people under the age of 35 voted 'no' than 'yes'. `Maastricht means peace' had been the refrain of the `yes' campaign, not an issue which generally preoccupies the young. There has been a great deal of self-con- gratulation here about the quality of the debate, which was indeed superior to the usual bland French fare, but no comments on the fact that, with the rather marginal exception of the communist daily, L'Humanite, not one single newspaper argued against the treaty's ratification.

The `yes' campaign was also remarkable for a U-turn in the middle. Whereas at the beginning Maastricht had been presented as a great new departure for France and Europe, which would respond in new ways to changed circumstances, by the end of the campaign the message was the oppo- site. Maastricht was the continuation of what had gone before, and a 'no' vote would severely undermine that continuity. This allowed the `yes' campaign to concen- trate on playing on people's fears of change and on making them feel guilty. Valery Giscard d'Estaing warned: 'Just think, as you put your 'no' paper into the ballot box, what damage you might be doing.' It was indeed a near-unanimous view among well- informed people preparing to vote `yes' that the treaty was no good, but that the consequences of a 'no' vote would be worse. The turbulence on the currency markets clearly brought grist to the pro- Maastricht mill, and no doubt swung many voters afraid for the value of their houses and savings. Yet when the result was announced, it was widely acclaimed as an act of national self-confidence.

Michel Sapin, the Finance Minister, had opted for an even simpler tactic. If you vote 'no', he said, interest rates will go up: if you vote yes', they will come down. Evi- dently, he considers that the French have short memories, for he lost no time on Monday in indicating that, after all, rates would remain the same. He and Ber6govoy had predicted financial and monetary catastrophe in the event of a 'no', saying that the franc would go the same way as the pound. So when the Bourse promptly fell 3 per cent on Monday morning, Radio France-Inter explained that 'the financial world has welcomed the result'. They added that the markets had suddenly dis- covered that France had a large public debt. The franc reached its floor in the ERM. Interest rates were raised by 21/2 per cent.

At the beginning of the campaign, the Socialist party's posters had been striking `Since he became a recording star he employs that little man to have the blues for him.' in their simple xenophobia, depicting a fat capitalist, a fat Japanese man, a fat Ameri- can, and a scrawny Balkan dictator who looked rather like Adolf Hitler. A unified Europe would vanquish all these foreign demons. Yet after the vote, the Socialist Paul Quiles declared that the result was 'a victory over fear'. Or again, the philoso- pher, Bernard-Henri Levy wrote that if the conservative `no' campaigner Philippe de Villiers ever became president, unemploy- ment would rise above two million and wreaths would be laid on the tomb of Mar- shal Petain. In fact, unemployment already stands at over three million and wreaths have been laid on Petain's grave by every president since de Gaulle.

There was also a good dose of the usual Marxist-style emphasis on politics as an `inevitable' historical process which none the less requires a struggle for its fulfil- ment. Pierre Beregovoy thanked those who had remained faithful to 'the memory of those men and women who have been struggling for 45 years to reconcile the peoples of Europe'. There was even our old Soviet friend, the confession of mea culpa about 'mistakes' made in the past and pious promises not to repeat them. Beregovoy promised that 'the government will henceforth listen more closely to the people', and Jacques Delors agreed to `take account' of the high `no' vote. The President of the European Movement, Jean Francois-Poncet, said, 'Europe must no longer be built by technocrats and diplomats behind closed doors.' The spec- tacle of dreary time-serving politicians and bureaucrats droning on about 'reform', `progress', 'achievements', 'stages of con- struction' and 'building the future' is a masterpiece of Brezhnevite revivalism. The hollow men are back in control.