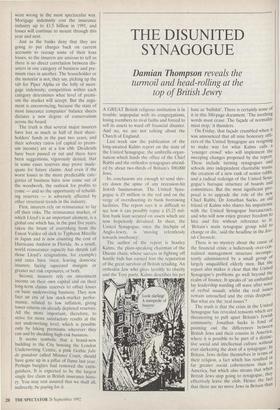 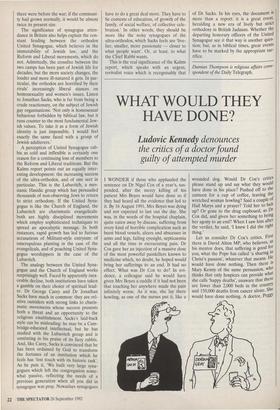 turmoil and head-rolling at the top of British Jewry

A GREAT British religious institution is in trouble: unpopular with its congregations, losing members to rival faiths and forced to sell its assets to ward off financial disaster. And no, we are not talking about the Church of England.

Last week saw the publication of the long-awaited Kalms report on the state of the United Synagogue, the umbrella organ- isation which funds the office of the Chief Rabbi and the orthodox synagogues attend- ed by about two-thirds of Britain's 300,000 Jews.

Its conclusions are enough to send shiv- ers down the spine of any recession-hit Jewish businessman. The United Syna- gogue is £9 million in the red and on the verge of overshooting its hank borrowing facilities. The report says it is difficult to see how it can possibly repay a £5.25 mil- lion bank loan secured on assets which are now hopelessly devalued. In short, the United Synagogue, once the linchpin of Anglo-Jewry, is 'moving relentlessly towards insolvency'.

The author of the report is Stanley Kalms, the plain-speaking chairman of the Dixons chain, whose success in fighting off hostile bids has earned him the reputation of the great survivor of British retailing. An orthodox Jew who gives lavishly to charity and the Tory party, Kalms describes his pet hate as 'bullshit'. There is certainly none of it in this 300-page document. 'The soothing words must cease. The facade of normality must stop,' it thunders.

On Friday, that façade crumbled when it was announced that all nine honorary offi- cers of the United Synagogue are resigning to make way for what Kalms calls a `younger crowd' who will implement the sweeping changes proposed by the report. These include turning synagogues and schools into independent charitable trusts, the creation of a new rank of senior rabbi, and a radical redesign of the United Syna- gogue's baroque structure of boards and committees. But the most significant pro- posal is to upgrade the role of the new Chief Rabbi, Dr Jonathan Sacks, an old friend of Kalms who shares his impatience with the United Synagogue bureaucracy, and who will now enjoy greater freedom to hire and fire without reference to it. 'Britain's main synagogue group told to change or die,' said the headline in the Jew- ish Chronicle. There is no mystery about the cause of the financial crisis: a ludicrously over-cen- tralised management structure incompe- tently administered by a small group of largely unqualified elderly men. But the report also makes it clear that the United Synagogue's problems go well beyond the realm of finance. It speaks of 'an embattled lay leadership warding off wave after wave of verbal assault, whilst the real issues remain untouched and the crisis deepens'. But what are the 'real issues'? The truth is that the crisis in the United Synagogue has revealed tensions which are threatening to pull apart Britain's Jewish community. Jonathan Sacks is fond of pointing out the differences between British Jews and their cousins in America, where it is possible to be part of a distinc- tive social and intellectual culture without ever darkening the door of a synagogue. In Britain, Jews define themselves in terms of their religion, a fact which has resulted in far greater social cohesiveness than In America, but which also means that when British Jews stop going to synagogue, theY effectively leave the club. Hence the fact that there are no more Jews in Britain than

there were before the war; if the communi- ty had grown normally, it would be almost twice its present size.

The significance of synagogue atten- dance in Britain also helps explain the con- stant feuding between the orthodox United Synagogue, which believes in the immutability of Jewish law, and the Reform and Liberal movements, which do not. Admittedly, the crossfire between the two camps has been part of Jewish life for decades; but the more society changes, the louder and more ill-natured it gets. In par- ticular, the orthodox are horrified by their rivals' increasingly liberal stances on homosexuality and women's issues. Listen to Jonathan Sacks, who is far from being a crude reactionary, on the subject of Jewish gay organisations: 'Not only is homosexual behaviour forbidden by biblical law, but it runs counter to the most fundamental Jew- ish values. To take it as a form of Jewish identity is just impossible. I would feel exactly the same faced with a group of Jewish adulterers.'

A perception of United Synagogue rab- bis as cold and inflexible is certainly one reason for a continuing loss of members to the Reform and Liberal traditions. But the Kalms report points out an equally inter- esting development: the increasing success of the ultra-orthodox, and of one sect in particular. This is the Lubavitch, a mes- sianic Hasidic group which has persuaded thousands of non-observing Jews to return to strict orthodoxy. If the United Syna- gogue is like the Church of England, the Lubavitch are charismatic evangelicals: both are highly disciplined movements which employ sophisticated techniques to spread an apocalyptic message. In both instances, rapid growth has led to furious accusations of Militant-style entryism: of unscrupulous planting in the case of the evangelicals, and of poaching United Syna- gogue worshippers in the case of the Lubavitch.

The analogy between the United Syna- gogue and the Church of England works surprisingly well. Faced by apparently inex- orable decline, both institutions have taken a gamble on their choice of spiritual lead- er. Dr George Carey and Dr Jonathan Sacks have much in common: they are rel- ative outsiders with strong links to charis- matic movements whose success presents both a threat and an opportunity to the religious establishment. Sacks's laid-back style can be misleading: he may be a Cam- bridge-educated intellectual, but he has studied with the Lubavitch group and is unstinting in his praise of its fiery rabbis. And, like Carey, Sacks is convinced that he has been ordained by God to transform the fortunes of an institution which he feels has 'lost touch with its historic task'. As he puts it, 'We built very large syna- gogues which left the congregation some- what passive, reflecting the needs of a previous generation when all you did in synagogue was pray. Nowadays synagogues have to do a great deal more. They have to be contexts of education, of growth of the family, of social welfare, of collective cele- bration.' In other words, they should be more like the noisy synagogues of the ultra-orthodox, which Sacks feels are 'live- lier, smaller, more passionate — closer to what people want'. Or, at least, to what the Chief Rabbi wants.

This is the real significance of the Kalms report, which speaks with an urgent, revivalist voice which is recognisably that of Dr Sacks. In his eyes, the document is more than a report: it is a great event, heralding a new era of lively but strict orthodoxy in British Judaism. Whether the departing honorary officers of the United Synagogue see it that way is another ques- tion; but, as in biblical times, great events have to be marked by the appropriate sac- rifice.