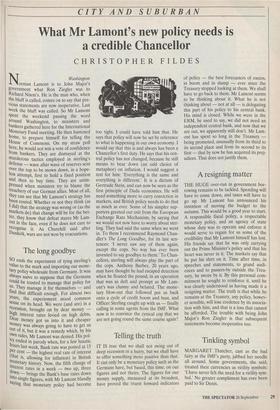 What Mr Lamont's new policy needs is a credible Chancellor

NWashington orman Lamont is to John Major's government what Ron Ziegler was to Richard Nixon's. He is the man who, when the bluff is called, comes on to say that pre- vious statements are now inoperative. Last week the bluff was called. So Mr Lamont spent the weekend passing the word around Washington, to ministers and bankers gathered here for the International Monetary Fund meeting. He then hastened home, to prepare himself for telling the House of Commons. On my straw poll here, he would not win a vote of confidence from bankers. They are dismayed at the murderous tactics employed in sterling's defense — wave after wave of reserves sent over the top to be mown down, in a hope- less attempt, first to hold a fixed position and then to buy time. They are unim- pressed when ministers try to blame the treachery of our German allies. Most of all, they can see that Mr Lamont's strategy has been routed. Whether or not they think (as I did) that the strategy was wrong or (as the markets do) that change will be for the bet- ter, they know that defeat stares Mr Lam- ont in the face, even if he does not care to recognise it. As Churchill said after Dunkirk, wars are not won by evacuations.

SO ends the experiment of tying sterling's value to the mark and importing our mone- tary policy wholesale from Germany. It was al ways naive to suppose that the Germans could be trusted to manage that policy for US. They manage it for themselves — and find that difficult enough. For almost two Years, the experiement stood common sense on its head. We were (and are) in a recession, brought on by dear money high interest rates levied on high debts. Dear money got us into it and cheaper money was always going to have to get us out of it, but it was a remedy which, by his own rules, Mr Lamont was denied. His pol- icy ended in parody when, for a few lunatic hours last week, Bank rate was posted at 15 Per cent — the highest real rate of interest (that is, allowing for inflation) in British Monetary history. Now, the fifth change of interest rates in a week — two up, three d. own — brings the Bank's base rates down into single figures, with Mr Lamont blandly saying that monetary policy had become too tight. I could have told him that. He says that policy will now be set by reference to what is happening in our own economy. I would say that this is and always has been a Chancellor's first duty. He says that his cen- tral policy has not changed, because he still means to bear down (an odd choice of metaphor) on inflation. I would suggest a text for him: 'Everything is the same and everything is different.' It is a dictum of Gertrude Stein, and can now be seen as the first principle of Dada economics. He will need something more to carry conviction in markets, and British policy needs to do that as much as ever. Some of his simpler sup- porters greeted our exit from the European Exchange Rate Mechanism, by saying that we would not now have to worry about ster- ling. They had said the same when we went in. To them I recommend Raymond Chan- dler's The Long Goodbye, for its last sen- tences: 'I never saw any of them again, except the cops. No way has ever been invented to say goodbye to them.' To Chan- cellors, sterling will always play the part of the cops. Anthony Barber, 20 years ago, may have thought he had escaped detection when he floated the pound, in an operation that was as deft and prompt as Mr Lam- ont's was clumsy and belated. The mone- tary blow-out that followed put us back onto a cycle of credit boom and bust, and Officer Sterling caught up with us — finally calling in some agents from the IMF. What now is to convince the cynical cop that we are not going round the same course again?

IT IS true that we shall not swing out of deep recession in a hurry, but we shall have to offer something more positive than that. It can only be a monetary policy such as the Germans have, but based, this time, on our figures and not theirs. The figures for our money supply, measured at its broadest, have proved the truest forward indicators of policy — the best forecasters of excess, in boom and in slump — ever since the Treasury stopped looking at them. We shall have to go back to them. Mr Lamont seems to be thinking about it. What he is not thinking about — not at all — is delegating this part of his policy to his central bank. His mind is closed. While we were in the ERM, he used to say, we did not need an independent central bank, and now that we are out, we apparently still don't. Mr Lam- ont has spent so long in the Treasury being promoted, unusually from its third to its second place and from its second to its first — that by now he has acquired its prej- udices. That does not justify them.

THE HUGE over-run in government bor- rowing remains to be tackled. Spending will have to come down, and taxes will have to go up. Mr Lamont has announced his intention of moving the budget to the autumn. This would be a good year to start. A responsible fiscal policy, a respectable monetary policy, and an agency of state whose duty was to operate and enforce it would serve to regain for us some of the credibility that Mr Lamont himself has lost. His friends say that he was only carrying out the Prime Minister's policy and that his heart was never in it. The markets say that he put his shirt on it. Time after time, in speeches and statements, to grand audi- ences and to passers-by outside the Trea- sury, he swore by it. By this personal com- mitment he sought to reinforce it, until he was clearly understood as having made it a resigning matter. The truth is that while he remains at the Treasury, any policy, howev- er sensible, will lose credence by its associa- tion with him, and that is a loss that cannot be afforded. The trouble with being John Major's Ron Ziegler is that subsequent statements become inoperative too.

MARGARET Thatcher, cast as the bad fairy at the IMF's party, jabbed her needle all around. Some governments, she said, treated their currencies as virility symbols: `I have never felt the need for a virility sym- bol.' No greater compliment has ever been paid to Sir Denis.