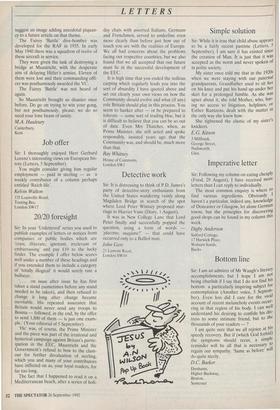 Sir: While it is true that child abuse appears to be a fairly recent pastime (Letters, 5 September), I am sure it has existed since the creation of Man. It is just that it was accepted as the norm and never spoken of in polite society.

My sister once told me that in the 1920s when we were staying with our paternal grandparents, Grandfather used to sit her on his knee and put his hand up under her skirt for a prolonged fumble. As she was upset about it, she told Mother, who, hav- ing no access to litigation, helplines, or Esther Rantzens, dealt with the matter In the only way she knew how: She tightened the elastic of my sister's knickers.