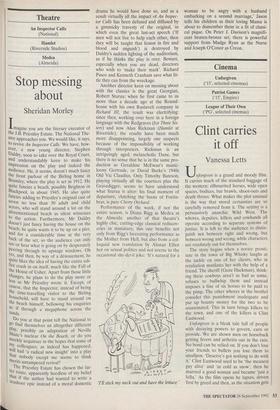 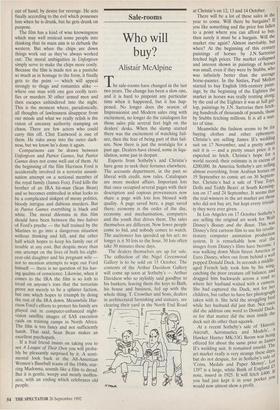 Clint carries it off

Unforgiven is a grand and moody film. It carries much of the standard baggage of the western: silhouetted horses, wide open spaces, bodices, bar brawls, shoot-outs and death throes. What makes the plot unusual is the way that moral certainties are so carefully removed from it. The setting is a persuasively anarchic Wild West. The whores, deputies, killers and cowhands all operate according to separate systems of justice. It is left to the audience to distin- guish not between right and wrong, but between wrong and wrong, while characters are resolutely out for themselves.

The story begins when a novice prosti- tute in the town of Big Whisky laughs at the tackle on one of her clients, who in retaliation mutilates her with the help of a friend. The sheriff (Gene Hackman), think- ing these cowboys aren't as bad as some, refuses to bullwhip them and instead imposes a fine of six horses to be paid to the pimp. The other whores in the brothel consider this punishment inadequate and put up bounty money for the two to be assassinated. This in turn brings killers to the town, and one of the killers is Clint Eastwood.

Unforgiven is a bleak tale full of people with decaying powers to govern, earn or provide. We are shown men on horseback getting fevers and arthritis out in the rain. No bond can be relied on. If you don't lose your friends to bullets you lose them to smallpox: 'Deserve's got nothing to do with it.' Clint Eastwood used to be 'the meanest guy alive' and 'as cold as snow', then he married a good woman and became 'just a fella.' As the film opens he lapses, driven first by greed and then, as the situation gets

out of hand, by desire for revenge. He acts finally according to the evil which possesses him when he is drunk, but he gets drunk on purpose.

The film has a kind of wise knowingness which may well mislead some people into thinking that its main aim is to debunk the western. But when the chips are down things work out as they've always worked out. The moral ambiguities in Unforgiven simply serve to make the chips more costly. Because the film is made not as a pastiche so much as in homage to the form, it finally gets to the point — which will appeal strongly to thugs and romantics alike where one man with one gun coolly terri- fies or murders 30 other armed men and then escapes unhindered into the night. This is the moment where, paradoxically, all thoughts of lawlessness disappear from our minds and what we really relish is the vision of uncanny authority stamping on chaos. There are few actors who could carry this off. Clint Eastwood is one of them. He rides away into the outer dark- ness, but we know he's done it again.

Comparisons can be drawn between Unforgiven and Patriot Games, but Patriot Games does not come well out of them. At the beginning of the film Harrison Ford is accidentally involved in a terrorist assassi- nation attempt on a notional member of the royal family (James Fox). Ford kills the brother of an IRA hit-man (Sean Bean) and so becomes embroiled in what looks to be a complicated sinkpot of messy politics, bloody intrigue and dubious murders. But in Patriot Games everything is black and white. The moral dilemma in this film should have been between the two halves of Ford's psyche — the half trained by the Marines to go into a dangerous situation without thinking and kill, and the other half which hopes to keep his family out of trouble at any cost. But despite more than one attempt on the lives of both his eight- year-old daughter and his pregnant wife not to mention attempts to wipe out Ford himself — there is no question of his hav- ing qualms of conscience. Likewise, when it comes to the IRA the film is so loth to tread on anyone's toes that the terrorists prove not merely to be a splinter faction, but one which hopes to triumph by doing the rest of the IRA down. Meanwhile Har- rison Ford's efforts to protect his family are played out in computer-enhanced night- vision satellite images of SAS execution raids on training camps in North Africa. The film is too fancy and not sufficiently harsh. That said, Sean Bean makes an excellent psychopath.

If a frail friend insists on taking you to see A League of Their Own you will proba- bly be pleasantly surprised by it. A senti- mental look back at the All-American Women's Baseball teams of the 1940s, star- ring Madonna, sounds like a film to dread. But it is gentle, weepy and mostly inoffen- sive, with an ending which celebrates old people.