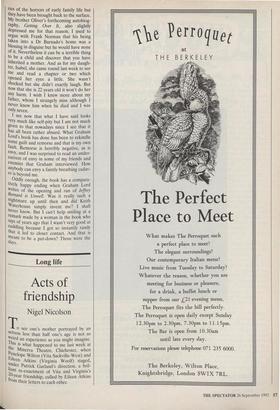 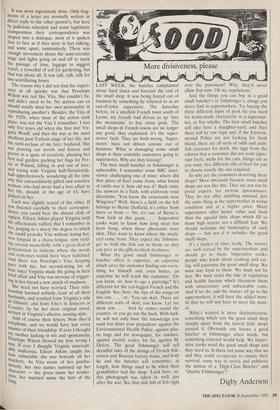 To see one's mother portrayed by an actress less than half one's age is not so weird an experience as you might imagine. This is what happened to me last week at the Minerva Theatre, Chichester, when Penelope Wilton (Vita Sackville-West) and Eileen Atkins (Virginia Woolf) staged, under Patrick Garland's direction, a bril- liant re-enactment of Vita and Virginia's 20-year friendship, culled by Eileen Atkins from their letters to each other.

It was most ingeniously done. Only frag- ments of a letter are normally written in direct reply to the other person's, but here by judicious selection and some legitimate transposition their correspondence was shaped into a dialogue, most of it spoken face to face as if they were in fact talking, and some apart, ruminatively. There was enough movement about the semi-circular stage and lights going on and off to mark the passage of time, luggage to suggest travel, a trowelful of soil for gardening, but that was about all. It was talk, talk, talk for two scintillating hours.

The reason why I did not find the experi- ence at all spooky was that Penelope Wilton was not like Vita. She couldn't be, and didn't need to be. No actress can or should totally shed her own personality in reproducing another's. Besides, the Vita of the 1920s, when most of the action took Place, was not the Vita I remember. I was only five years old when she first met Vir- ginia Woolf, and then she was at the most ebullient post-Trefusis stage of her life, not the semi-recluse of my later boyhood. She was pouring out novels and history and poetry in a spate of creativity, planting her first real garden, packing her bags for Per- sia or Poland, falling in and out of love, and toying with Virginia half-flirtatiously, half-apprehensively, wondering all the time why this extraordinarily gifted and sensitive woman, who had never had a love affair in her life, should, at the age of 43, have picked on her.

Each was slightly scared of the other. If you listened carefully to their correspon- dence, you could hear the distant clink of rapiers. Eileen Atkins played Virginia with the affectionate raillery that I remember in her, judging to a nicety the degree to which she could provoke Vita without losing her, now languid in a chaise-longue, now strid-

ing , ng around masterfully, with a great deal of gesticulation to indicate where the words ,ind sentences would have been italicised. And there was Penelope's Vita, keeping Pace with her, but second-string for all that, since Virginia made the going in their brief affair and Vita was nervous of trigger- ing in her friend a new attack of madness. She need not have worried. Their rela- tionship harmed nobody, least of all their h. usbands, and resulted from Virginia's side m Orlando, and from Vita's in Seducers in eliudor, by far her most original novel, Written in Virginia's allusive, teasing style. And of course their letters. Now they'd telephone, and we would have lost every nuance of their fiiendship. If ever I thought rnY mother lacking in wit and spontaneity, Penelope Wilton showed me how wrong I Was. If ever I thought Virginia unaccept- ably malicious, Eileen Atkins taught me w vulnerable she was beneath all her mockery. As Vita wrote of her posthu- rnously, her two names summed up her character — her given name her tender- ness, her married name the hint of the fang.