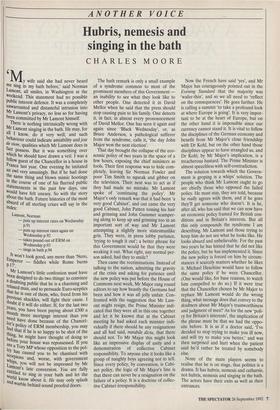 Hubris, nemesis and singing in the bath

My wife said she had never heard me sing in my bath before,' said Norman Lamont, all smiles, in Washington at the weekend. This statement had no possible public interest defence. It was a completely unwarranted and distasteful intrusion into Mr Lamont's privacy, no less so for having been committed by Mr Lamont himself. There is nothing intrinsically wrong with Mr Lamont singing in the bath. He may, for all I know, do it very well, and such behaviour could indicate amiability and joie de vivre, qualities which Mr Lamont does in fact possess. But it was something over which he should have drawn a veil. I was a fellow guest of the Chancellor in a house in France last year. One evening he imitated an owl very amusingly. But if he had done the same thing and blown mimic hootings in the course of one of his flurried public statemenents in the past few days, one would have felt uneasy. So with the story about the bath. Future histories of the most

absurd of all sterling crises will say in the index:

Mr Lamont's little confession must have been designed to do two things: to convince a doubting public that he is a charming and relaxed man, and to persuade Euro-sceptics that he is one of them, who, freed from his previous shackles, will fight their cause. I doubt if it will do either. If, for the last two Years, you have been paying about £300 a month more mortgage interest than you need have done because of the Chancel- lor's Policy of ERM membership, you may feel that if he is so happy to be shot of the thing, he

before your house was repossessed. If you ,re a Tory MP whose opposition to the pol- cY has caused you to be chastised with scorpions and, worse, with government , hips, you will not e impressed b y Mr LaMont's late converbsion. You are fully entitled to sing in your bath and let the world know about it. He may only splash and warble behind sound proofed doors.

The bath remark is only a small example of a syndrome common to most of the prominent members of this Government an inability to see what they look like to other people. One detected it in David Mellor when he said that the press should stop causing pain to his family. One detects it, in fact, in almost every pronouncement of David Mellor. One has seen it again and again since 'Black Wednesday', or, as Bruce Anderson, a pathological sufferer from the syndrome, calls it, 'the day John Major won the next election'.

That day brought the collapse of the eco- nomic policy of two years in the space of a few hours, exposing the chief ministers as fools. Their first response was to hide com- pletely, leaving Sir Norman Fowler and poor Tim Smith to squeak and gibber on the television. Their next was to act as if they had made no mistake. Mr Lamont spoke of 'continuing the policy'. Mr Major's only remark was that it had been 'a very good Cabinet', and out came the very good Cabinet, John Patten tossing his hair and grinning and John Gummer scamper- ing along to keep up and grinning too in an important sort of way and Mr Lamont attempting a slightly more statesmanlike grin. They were, in press lobby parlance, `trying to tough it out'; a better phrase for this Government would be that they were weaking it out. What right, any normal per- son asked, had they to smile?

Then came the recriminations. Instead of talking to the nation, admitting the gravity of the crisis and asking for patience until the new policy was put before the House of Commons next week, Mr Major rang round editors to say how beastly the Germans had been and how it was all jolly unfair. Con- fronted with the suggestion that Mr Lam- ont might resign, the Prime Minister indi- cated that they were all in this one together and let it be known that at the Cabinet meeting he had asked each minister indi- vidually if there should be any resignations and all had said, mirabile dictu, that there should not. To Mr Major this might look like an impressive display of unity and a demonstration of collective Cabinet responsibility. To anyone else it looks like a group of naughty boys agreeing not to tell. Since every policy, by convention, is Cabi- net policy, the logic of Mr Major's line is that there can never be a resignation on the failure of a policy. It is a doctrine of collec- tive Cabinet irresponsibility. Now the French have said 'yes', and Mr Major has courageously pointed out in the Evening Standard that the majority was `wafer-thin', and so we all need to 'reflect on the consequences'. He goes further. He is calling a summit 'to take a profound look at where Europe is going'. It is very impor- tant to be at the heart of Europe, but on the other hand it is impossible since our currency cannot stand it. It is vital to follow the disciplines of the German economy and benefit from Mr Major's close friendship with Dr Kohl, but on the other hand those disciplines appear to have strangled us, and Dr Kohl, by Mr Major's implication, is a treacherous bastard. The Prime Minister is almost speechless with self-contradiction. The solution towards which the Govern- ment is groping is a whips' solution. The people who think Mr Lamont ought to go are chiefly those who opposed the failed policy. He must stay, they are told, because he really agrees with them, and if he goes they'll get someone who doesn't. It is he, after all, who has said that we can now have an economic policy framed for British con- ditions and in Britain's interests. But all this only compounds the syndrome I am describing. Mr Lamont and those trying to keep him do not see what he looks like. He looks absurd and unbelievable. For the past two years he has hinted that he did not like the policy, but he has implemented it. Since the new policy is forced on him by circum- stances it scarcely matters whether he likes it. Michael Heseltine would have to follow the same policy if he were Chancellor. (One would like, for base reasons, to watch him compelled to do so.) If it were true that the Chancellor chosen by Mr Major to replace Mr Lamont would do the wrong thing, what message does that convey to the doubters about Mr Major's trustworthiness and judgment of men? As for the new 'poli- cy for Britain's interests', the implication of the phrase must be that we had the oppo- site before. It is as if a doctor said, 'I've decided to stop trying to make you ill now, and will try to make you better,' and was then surprised and hurt when the patient said he'd rather be treated by somebody else.