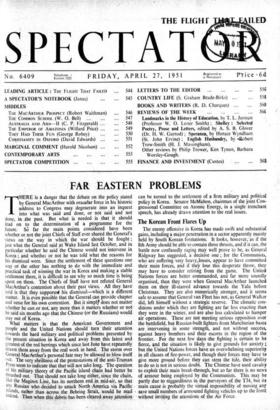 What matters is that the American Government and people and the United Nations should turn their attention towards the hard military and political problems presented by the present situation in Korea and away from this latest and greatest of the red herrings which since last June have repeatedly drawn them away from the real work in hand. The storm over General MacArthur's personal fate may be allowed to blow itself cwt. The very shrillness of the protestations of the anti-Truman Press seem to indicate that that will not take long. The question of his military theory of the Pacific island chain had better be thrashed out. That should not take long either, since the chain. !Ike the Maginot Line. has its northern end in mid-air, so that any Russian who decided to attack North America via Pacific islands, rather than across the Behring Strait, would be mad indeed. Then when this debris has been cleared away attention can be turned to the settlement of a firm military and political policy in Korea. Senator McMahon, chairman of the joint Con-- gressional Committee on Atomic Energy, in a single trenchant speech, has already drawn attention to the real issues.