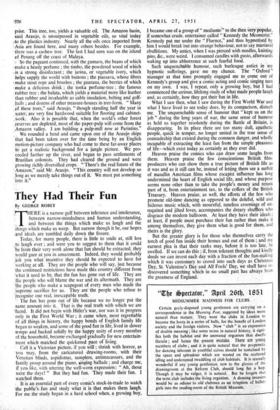 Certain gayly-disposed young gentlemen are carrying on a correspondence in the Morning Post, suggested by ideas more natural than mature. They want the clubs in. London to become the hosts in a series of balls, for the benefit of London society and the foreign visitors. Now "club" is an expression of double meaning ; like some terms in natural history, it signi- fies both the habitat and the animated organism that dwells therein ; and hence the present mistake. There are young members of clubs ; and it is quite natural that the propensit■ for dancing inherent in youthful calves should be tantalised by the space and splendour which are wasted on the scattered idling and undertoned twaddling of club habitués. It is scarcely wonderful if any young gentleman, new to the glories of the drawingroom at the Reform Club, should long for a hop. Though it may be vulgar, it is natural. But he forgets that the term club includes the living organism. A dancing invasion would be as odious to old clubmen as an irruption of ballet- girls into the reading-room of the British Museum.