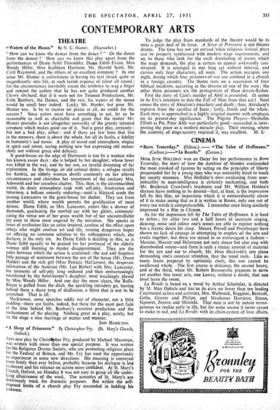 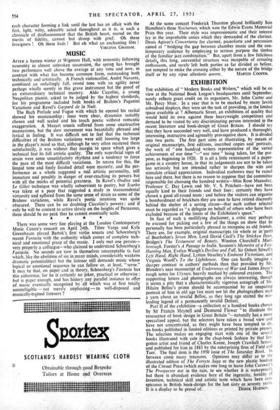 a Born 'Yesterday." (Odeon.) — a The Tales of Hoffmann." (Carlton.)—" La Ronde." (Curzon.) MISS JUNE HOLLIDAY won an Oscar for her performance in Born Yesterday, the story of how the dumbest of blondes confounded the most crooked of tycoons by acting on the principles of liberty propounded her by a young man who was ostensibly hired to teach her society manners. Miss Holliday's slow awakening from near- imbecility to near-intelligence is certainly enchanting, and both Mr. Broderick Crawford's brashness and Mr. William Holden's shyness leave nothing to be desired—that, at least, is the impression left by this film, an impression which it is extraordinarily clever of it to make seeing that as it is written in Bronx, only one out of every ten words is comprehensible. I remember once being similarly impressed by a film in Chinese.

As for the impression left by The Tales of Hoffmann. it is hard to define ; for after two and a half hours of incessant singing, dancing, noise and colour one's senses are able to register nothing but a frantic desire for sleep. Messrs. Powell and Pressburger have shown no lack of courage in attempting to employ all the arts and crafts together, but these are mixed in so extravagant a fashion- Massinc, Shearer and Helpmann not only dance but also sing with disembodied voices—and there is such a titanic amount of material for the eye and ear to absorb, Mr. Hein Heckroth's sets alone demanding one's constant attention, that the mind reels. Like so many feasts prepared by optimistic chefs, this one cannot be swallowed whole. The first course is delicious, the second heavy, and at the third, when Mr. Robert Rounseville prepares to serve yet another fine tenor aria, one knows, without a doubt, that one must leave the room.

La Ronde is based on a novel by Arthur Schnitzler, is directed by M. Max Ophuls and has as its stars no fewer than ten leading Continental actors and actresses, Mm. Walbrook, Reggiani, Barrault, Gclin, Gravey and Philipe, and Mesdames Darrieux, Simon, Signoret, Joyeux and Miranda. That man is not by nature mono- gamous we realise early in life, but for some reason it never ceases to make us sad, and La Ronde. with its chain-system of love affairs, each character forming a link until the last has an affair with the first, light, witty, adorably acted throughout as it is, is such a chronicle of disillusionment that the British heart, reared on the merits of fidelity, cannot but droop with grief. Oh these foreigners ! Oh these beds ! But oh what an enchanting film ! VIRGINIA GRAHAM. VIRGINIA GRAHAM.