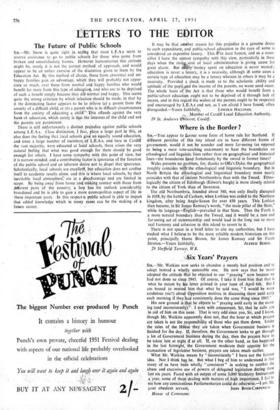 The Future of Public Schools

Sta.—Mr. Snow is quite right in saylhg that most L.E.A.s seem to reserve assistance to go to public schools for those who come from broken and unsatisfactory homes. However humanitarian this attitude might be, surely it is not the correct method of approach, and would appear to be an unfair exercise of the discretion given to them by the Education Act. By this method of choice, those from abnormal and un- happy families gain an advantage, which they will probably not appre- ciate so much, over those from normal and happy families who would benefit far more from this type of educvion, and who are to be deprived of such a benefit simply because they ak normal and happy. This seems quite the wrong criterion by which selection should be made, in that by it the dominating factor appears to be to relieve (a) a parent from the anxiety of a difficult child, or (b) a parent who is in difficult circumstances from the anxiety of educating a chile' This offends against the very basis of education, which surely is that the interests of the child and not the parents are _paraniount.

There is still unfortunately a distinct prejudice against public schools among L.E.A.s. Class distinction, I fear, plays a large part in this, as also does the feeling that local schools give an equally sound education, and since a large number of members of L.E.A.s, and here in Cardiff the vast majority, were educated at loCal schools, there arises the very natural feeling that what was good enough for them should be good enough for others. I have some sympathy with this point of view, but it is narrow-minded, and a contributing factor is ignorance of the function of the public school and an inherent desire not to dispel that ignorance. Scholastically, local schools are excellerft, but education does not confine itself to academic results alone, and this is where local schools, by their inevitable local atmosphere' are at a #isadvantage and are limited in scope. By being away from home and. making contact with those from different parts of the country, a bOy has his outlook considerably broadened and he is able to gain a more cosmopolitan aspect of life in those important years In this respect public school is able to impart that added knowledge which in many cases can be the making of a future career.

It may be that another reason for this prejudice is a genuine desire to curb expenditure, and public-school education in the eyes of some is considered an expentive luxury.. This *at least honest, and as a coun- cillor I have the utmost sympathy. with this view, particularly in these

days when the risi cost of local administration is giving cause for great alarm. But a I y money spent on education is never wasted ; education is never a luxury, it is a necessity, although in some cases a certain'type of education may be a luxury whereas in others it may be a necessity. Provided a check is made as to the scholastic ability and aptitude of the pupil,and the income of the parents, no waste need occur. The whole basis of the Act is that those who would benefit from a public-school education ought not to be deprived of it through lack of means, and in this regard the wishes of the parents ought to be respected and encouraged by L.E.A.s and not, as I am afraid 1 have found, often