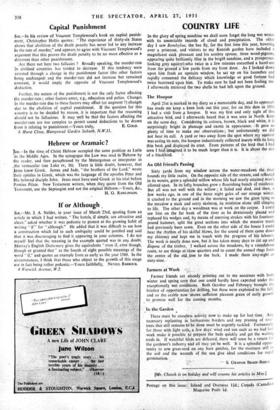 SIR.—In his review of Viscount Templewood's book on capital punish- ment, Christopher Hollis quotes: "The experience of thirty-six States shows that abolition of the death penalty has never led to any increase In the rate of murder," and appears to agree with Viscount Templewood's argument that this proves the death penalty to be no more effective as a deterrent than other punishments.

Are there not here two fallacies ? Broadly speaking, the murder-rate in civilised countries has tended to decrease. If this tendency were arrested through a change in the punishment factor (the other factors being unchanged) and the murder-rate did not increase but remained constant, it would imply the opposite of Viscount Templewood's deduction.

Further, the nature of the punishment is not the only factor affecting the murder-rate ; other factors enter, e.g., education and police. Changes in the murder-rate due to these factors may offset (or augment ?) changes due to the abolition of capital punishment. If the question for this country is to be decided by reason, it is important that the reasoning should not be fallacious. It may well be that-the factors affecting the murder-rate are too complex to permit sound deductions to be drawn from it relating to punishment.—Yours truly, E. GOLD. 8 Hurst Close, Hampstead Garden Suburb, N.W.II.