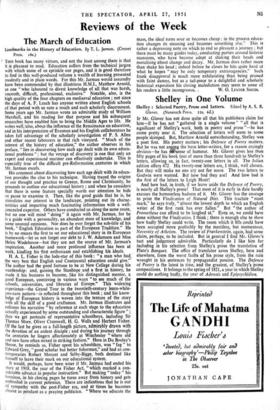 The March of Education

' Tins book has many virtues, and not the least among them is that it is pleasant to read. Education suffers from the technical jargon with which some of us sprinkle our pages, and it is good therefore to find in this well-produced volume a wealth of learning presented modestly and in plain words. For this Mr. Jarman would assuredly have been commended by that illustrious H.M.I., Matthew Arnold, as one " who laboured to divest knowledge of all that was harsh, uncouth, difficult, professional, exclusive." Notable, also, is the high quality of the four chapters on mediaeval education ; not since the days of A. F. Leach has anyone written about English schools of that period with so sure a touch and such scholarly discernment. Some years ago Mr. Jarman wrote an admirable study of William Marshall, and his reading for that purpose and his subsequent researches have enabled him to bring the Middle Ages to life. He writes well,-also, about the influence of the Renaissance on education, and in his interpretation of Erasmus and his English collaborators he takes full advantage of the scholarly investigation of P. S. Allen and other recent labourers in that rich vineyard. " Much of the interest of the history of education," the author observes in his preface, " lies in discovering how each age dealt with its own educa- tional problems " ; but the voyage of discovery is one that only an expert and experienced mariner can effectively undertake. This is especially true of the difficult pre-Reformation centuries in which Mr. Jarman excels. His comment about discovering how each age dealt with its educa- tion provides the clue to his technique. Having traced the origins of our thought and practice to Greece, Rome and Christianity, he proceeds to outline our educational history ; and when he considers that there is some feature specially worth our attention he bids us pause to examine it. Then, like the good guide that he is, he stimulates our interest in the landscape, pointing out its charac- teristics and imparting much fascinating information with a well- concealed expertise. Others have conducted us along the same route, but no one will mind " doing " it again with Mr. Jarman, for he is a guide with a personality, an abundant store of knowledge, and some unusual opinions. Nor does he ever forget the sub-title of his book, " English Education as part of the European Tradition." He is by no means the first to set our educational story in its European framework—let us not forget our debt to J. W. Adamson and Miss Helen Wodehouse—but they are not the source of Mr. Jarman's inspiration. Another and more profound influence has been at work, kindling his 'first enthusiasm and establishing his ideals.

H. A. L. Fisher is the lode-star of this book: " a man who had the very best that English and Continental education could give." The author had the good fortune to be at New College during his wardenship: and, gaining the Stanhope and a first in history, he made it his business to become, like his distinguished mentor, a good European, contriving in various ways " to see much of the schools, universities, and libraries of Europe." This widening experience—the Grand Tour in the twentieth-century learn-while- you-earn pattern—is reflected throughout this book ; and his know. ledge of European history is woven into the texture of the story with all the skill of a good craftsman. Mr. Jarman illustrates and enlivens his narrative " by reference at each stage to the education actually experienced by some outstanding and characterstic figure " ; thus we get portraits of representative schoolboys, including Sir Thomas More. Oliver Cromwell, H. G. Wells and Herbert Fisher. Of the last he gives us a full-length picture, admirably drawn with the devotion of an ardent disciple ; and during his journey through the centuries he lingers affectionately at Winchester "where old and new have often mixed in striking fashion." Here in Du Boulay's House, he reminds us, Fisher spent his schooldays, was " fag " to Edward Grey, " good scholar but better fisherman," and had at con- temporaries Robert Morant and Selby-Bigge, both destined like himself to leave their mark on our educational system. It would, perhaps, have been wiser if Mr. Jarman had ended his story at 1918, the year of the Fisher Act, " which marked a con- siderable advance in popular instruction." But making " today " his terminus, in his closing pages he turns away from history and gets embroiled in current polemics. There are indications that he is out of sympathy with the post-Fisher era, and at times he becomes almost as petulant as a praying politician. " Where we educate the mass, the ideal turns sour or becomes cheap ; in the process educa- tion changes its meaning and becomes something else." This is rather a depressing note on which to end so pleasant a journey ; but there must be many guides today, conducting parties around historic mansions, who have become adept at shaking their heads and moralising about change and decay. Mr. Jarman does rather mole than shake his head ; indeed before he closes he hits quite hard at what he hopes " may be only temporary extravagancies." Such frank disapproval is much more exhilarating than being praised with faint damns, but as a tail-piece to a delightful and scholarly historical exposition his closing malediction may seem to some of