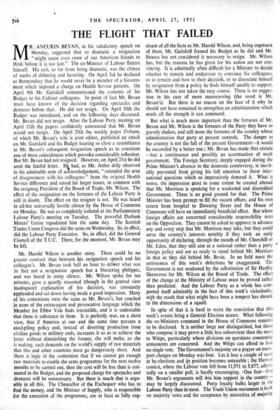 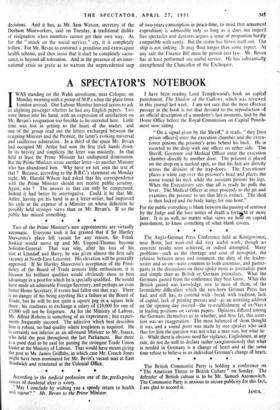 THE FLIGHT THAT FAILED

R. ANEURIN BEVAN, in his valedictory speech on Monday, suggested that so dramatic a resignation " might cause even some of our American friends to think before it is too late." The cx-Ministcr of Labour flatters himself. His exit, so far from being dramatic, was the climax of weeks of dithering and !layering. On April 3rd he declared at Bermondsey that he would never be a member of a Govern- ment which imposed a charge on Health Service patients. On April 9th Mr. Gaitskell communicated the contents of his Budget to his Cabinet colleagues. In point of fact Mr. Bevan must have known of the decision regarding spectacles and dentures before that. He did not resign. On April 10th the Budget was introduced, and on the following days discussed. Mr. Bevan did not resign. After the Labour Party meeting on April 12th the papers confidently announced that Mr. Bevan would not resign. On April 20th the weekly paper Tribune, of which Mr. Bevan's wife is joint editor, published an attack on Mr. Gaitskell and his Budget bearing so close a resemblance to Mr. Bevan's subsequent resignation speech as to constitute one of those coincidences which provoke considerable reflection. But Mr. Bevan had not resigned. However, on April 21st he did send the fateful letter. HL had, as Mr. Attlee drily observed in his admirable note of acknowledgement, " extended the area of disagreement with his colleagues " from the original Health Service difference and raised far larger issues, in common with the resigning President of the Board of Trade, Mr. Wilson. The effect of the resignation on the fortunes of the Labour Party is still in doubt. The effect on the resigner is not. He was heard in all-but universally hostile silence by the House of Commons on Monday. He was as completely isolated at the Parliamentary Labour Party's meeting on Tuesday. The powerful Durham Miners' Union repudiated him the same day. The Scottish Trades Union Congress did the same on Wednesday. So, in effect, did the Labour Party Executive. So, in effect, did the General Council of the T.U.C. There, for the moment, Mr. Bevan may be left.

Mr. Harold Wilson is another story. There could be no greater contrast than between his resignation speech and his colleague's. Mr. Bevan took half an hour to deliger what was in fact not a resignation speech but a blustering philippic, and was heard in stony silence. Mr. Wilson spoke for ten minutes, gave a quietly reasoned (though in the general view inadequate) explanation of his decision, was constantly applauded and sat down having made a good impression. Many of his contentions were the same as Mr. Bevan's, but couched in none of the extravagant and provocative language which the Member for Ebbw Vale finds irresistible, and it is undeniable that there is substance in them. It is perfectly true, on a short view, that if America at one and the same time pursues a stockpiling policy and, instead of diverting production from civilian goods to military ends, increases it so as to achieve the latter without diminishing the former, she will make, as she is making, such demands on the world's supply of raw materials that this and other countries must go dangerously short. And there is logic iri the contention that if we cannot get enough raw materials to enable the arms programme for the next twelve months to be carried out, then the cost will be less than is esti- mated in the Budget, and the proposed charge for spectacles and dentures will be unnecessary. But there is much that is argu- eble in all this. The Chancellor -of the Exchequer who has to find the money, and the Minister of Supply, who is responsible for the execution of the programme, are at least as fully cog- nisant of all the facts as Mr. Harold Wilson, and, being cognisant of them, Mr. Gaitskell framed his Budget as he did and Mr. Strauss has not considered it necessary to resign. Mr. Wilson has, but the reasons he has given for his action are not con- vincing. It is admittedly often difficult for a Minister to decide whether to remain and endeavour to convince his colleagues, or to remain and bow to their decision, or to dissociate himself by resignation from a policy he finds himself unable to support. Mr. Wilson has not taken the easy course. There is no sugges- tion in his case of mere manoeuvring (the word is Mr. Bevan's). But there is no reason on the face of it why he should not have remained to strengthen an administration which needs all the strength it can command.

But what is much more important than the fortunes of Mr. Bevan and Mr. Wilson is the fortunes of the Party they have so gravely shaken, and still more the fortunes of the country whose administration that party at present controls. The danger to the country is not the fall of the present Government—it would be succeeded by a better one ; Mr. Bevan has made that certain —but a continuance and possibly an accentuation of weak government. The Foreign Secretary, deeply engaged during the Prime Minister's absence in the domestic controversy, is inevit- ably prevented from giving his full attention to those inter- national questions which so imperatively demand it. What is worse, the impression must to some extent be created abroad that Mr. Morrison is speaking for a weakened and discredited Government. There is no good ground for that. The Prime Minister has been prompt to fill the vacant offices, and his own return from hospital to Downing Street and the House of Commons will have an immediately beneficial effect. But where foreign affairs are concerned considerable responsibility rests on the Opposition. They cannot be asked to approve in advance any and every step that Mr. Morrison may take, but they could serve the country's interests notably if they took an early opportunity of declaring, through the mouth of Mr. Churchill or Mr. Eden, that they -still aim at a national rather than a party foreign policy and are as ready to stand behind Mr. Morrison in that as they did behind Mr. Bevin. In no field must the seriousness of this week's defections be exaggerated. The Government is not weakened by the substitution of Sir Hartley Shawcross for Mr. Wilson at the Board of Trade. The effect of the change at the Ministry of Labour must be proved rather than predicted. And the Labour Party as a whole has com- ported itself admirably in the face of this week's vicissitudes, wish the result that what might have been a tempest has shrunk to the dimensions of a squall.

In spite of that it is hard to resist the conviction that this week's events bring a General Election nearer. What following the ex-Ministers command in the House of Commons remains to be disclosed. It is neither large nor distinguished, but those who compose it may prove a little less subservient than the mass to Whips, particularly where divisions on questions concerning armaments are concerned. And the Whips can afford to lose no single vote. The Government's majority on a prayer on trans- port charges on Monday was four. Let it lose a couple of seats at by-elections and ip position becomes untenable ; the Harrow contest, where the Labour vote fell from 11,971 to 8,877, admit- tedly on a smaller poll, is hardly encouraging. •One fear—that Mr. Bevan's arguments will *in him support in the country— may be largely discounted. Party loyalty bulks larger in the Labour Party than in most. The Trade Union movement is built on majority votes and the acceptance by minorities of majoritY decisions. And it has, as Mr. Sam Watson. secretary of the Durham Mineworkers, said on Tuesday, traditional dislike of resignation when members cannot get their own way. As for the " attack on the social services " cry, it is completely hollow. For Mr. Bevan to construct a grandiose and extravagant health scheme, and then insist that it shall be completely sacro- sanct, is beyond all toleration, And in the presence of an inter- national crisis so grave as to warrant the unprecedented step of two-years conscription in peace-time, to insist that armament expenditure is admissible Only so long as it does not imperil free spectacles and dentures argues a sense of proportion hardly compatible with sanity. But the storm has blown itself out. The ship is not sinking. It may float longer than some expect. At any rate the Finance Bill must be passed into law. Mr. Bevan has at least performed one useful service. He has substantially, strengthened the Chancellor of the Exchequer.