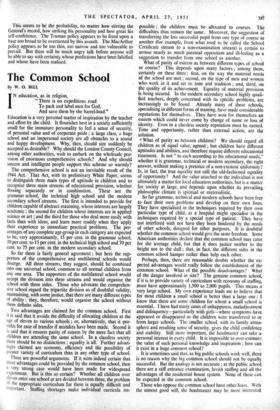 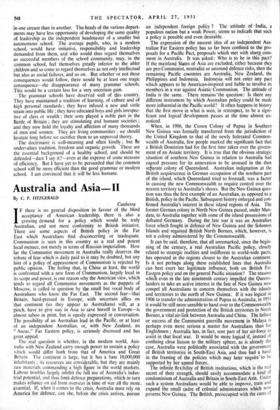 By W. 0. BELL I N education, as in religion. " There is no expeditious road To pack and label men for God, And save them by the barrel-load."

Education is a very personal matter of inspiration by the teacher and effort by the child. It flourishes best in a society sufficiently small for the immature personality to feel a sense of security, of personal value and of corporate pride ; a large class, a huge school and an impersonal society are all obstacles to a sound and happy development. Why, then, should size suddenly be accepted as desirable? Why should the London County Council, among other authorities, wish to embark on the wholesale pro- vision of enormous comprehensive schools? And why should sincere and intelligent people support this scheme so warmly?

The comprehensive school is not an inevitable result of the 1944 Act. That Act, with its preliminary White Paper, seems to distinguish three main types of aptitude in children and to recognise three main streams of educational provision, whether flowing separately or in combination. These are the grammar school, the technical high school and the modern secondary schoolstreams. The first is intended to provide for children capable of abstract reasoning, whose interests are largely academic ; the second for children whose interests are in applied science or art ; and the third for those who deal more easily with facts than with ideas, and learn more readily when they apply their experience to immediate practical problems. The per- centages of any complete age-group in each category are expected to be, very approximately, 15 per cent. in the grammar school, 10 per cent. to 15 per cent. in the technical high school and 70 per cent. to 75 per cent. in the modern secondary school.

So far there is fairly general agreement ; but here the sup- porters of the comprehensive and multilateral schools would diverge. All three streams, they suggest, should be combined into one universal school, common to all normal children from any one area. The supporters of the multilateral school would accept the division into three streams and would organise the school with three sides. Those who advocate the comprehen- sive school regard the tripartite division as of doubtful validity, maintaining, with some justice, that there are many different types of ability ; they. therefore, would organise the school without three definite sides.

Two advantages are claimed for the common school. First it is said that it avoids the difficulty of allocating children at the age of eleven to various schools • or, alternatively, that it pro- ides for ease of transfer if mistakes have been made. Second it is said that it ensures parity of esteem by the mere fact that all children are attending the same school. In a classless society there should be no distinctions ; equality is all. Further advan- tages claimed are economy, efficiency and the possibility of greater variety of curriculum than in any other type of school.

These are powerful arguments. If it were indeed certain that these advantages could be provided by the common school. then a very strong case would have been made for widespread experiment. But is this so certain? Whether all children over eleven enter one school or are divided between three, the problem of the appropriate curriculum for them is equally difficult and important. Staffing shortages make individual curricula im- possible ; the children must be allocated to courses. The difficulties thus remain the same. Moreover, the suggestion of transferring the less successful pupil from one type of course to another (for example, from what used to be called the School Certificate stream to a non-examination stream) is certain to arouse nearly as much parental opposition and ill-feeling as a suggestion to transfer from one school to another.

What of parity of esteem as between different types of school or course? This depends upon many factors ; among them.

certainly on these three: first, on the way the material needs of the school are met ; second, on the type of men and women who work in it and set its tone and tradition ; and, third, on the quality of its achievement. Equality of material provision is being secured. In the modern secondary school highly quali- fied teachers, deeply concerned with its specific problems, are increasingly to be found. Already many of these schools, specialising in different forms of training, have made considerable reputations for themselves. They have won for themselves an esteem which could never come by change of name or loss of identity. Even in a classless society reputation must be earned. Time and opportunity, rather than external action, are the solution.

• What of parity as between children? We should regard all children as of equal value, agreed ; but children have different aptitudes and abilities, and therefore require different educational treatment. Is not " to each according to his educational needs," whether it is grammar, technical or modern secondary, the right answer, without making a pretence of a non-existent uniformity?

Is, in fact, the true equality not still the old-fashioned equality of opportunity? And the value attached to the individual is not ultimately a matter for local education authorities, but is a matter for society at large, and depends upon whether its prevailing philosophic climate is spiritual or materialistic.

So far grammar, technical and modern schools have been free to face their own problems and develop on their own lines.

They have specialised in the techniques required by their own particular type of child, as a hospital might specialise in the techniques required by a special type of patient. They have not interfered with nor have they been hindered by the needs of other schools, designed for other purposes. It is doubtful whether the common school would give the same freedom. Some AMerican authorities declare that the common school may cater for the average child, but that it does justice neither to the bright nor to the dull ; that, in fact, the different sides in the common school hamper rather than help each other.

Perhaps, then, there are reasonable doubts whether the ex. pected advantages would really follow the establishment of the common school. What of the possible disadvantages? What of the danger involved in size? The genuine common school. if it is to provide variety of curriculum with economy of staffing. ,must have approximately 1,500 to 2,000 pupils. This means a very large school. My own experience leads me to believe that for most children a small school is better than a large one ; 1 know that there are some children for whom a small school is essential. I have had many cases of unhappiness, maladjustment and delinquency—particularly with girls—where symptoms have appeared or disappeared as the children were transferred to or from larger schools. The smaller school, with its family atmo, sphere and resulting sense of security, gives the child confidence and stability. Still more important, the headmaster can take a personal interest in every child. It is impossible to over-estimate the value of such personal knowledge and inspiration ; how can it exist in a huge common school? .1 It is sometimes said that, as big public schools work well, there is no reason why the big common school should not be equally successful. But the analogy is not accurate ; at the public school there are a stiff entrance examination, lavish staffing and all the advantages of the residential house system. Norte of these can be expected in the common school. Those who oppose the common school have other fears. With the utmost good will, the headmaster may be more interested in one stream than in another. Tho heads of the various depart- ments may have less opportunity of developing the same quality of leadership as the independent headmaster of a smaller but autonomous school. The average pupils, who, in a modern school, would have initiative, responsibility and leadership demanded from them, and who would thus regard themselves as successful members of the school community. may, in the common school, feel themselves greatly inferior to the abler children and so come to regard themselves as not only intellectual but also as social failures, and so on. But whether or not these consequences would follow, there would be at least one tragic consequence—the disappearance of many grammar schools. This would be a certain loss for a very uncertain gain.

The grammar schools have deservi well of this country. They have maintained a tradition of learning, of culture and of high personal standards ; they have infused a new and virile strain into public life ; they have educated boys and girls irrespec- tive of class or wealth ; their sons played a noble part in the Battle of Britain ; they are stimulating and humane societies ; and they now hold the loyalty and affection of many thousands of men and women. They are living communities ; we should hesitate long before we sacrifice them to an unproved theory. The doctrinaire is well-meaning and often kindly ; but Ile undervalues tradition, freedom and organic growth. These are the essential background of a healthy school, and should be defended—dare 1 say it?—even at the expense of some measure of efficiency. But I have yet to be persuaded that the common school will be more efficient than the good grammar or modern school. I am convinced that it will be less humane.