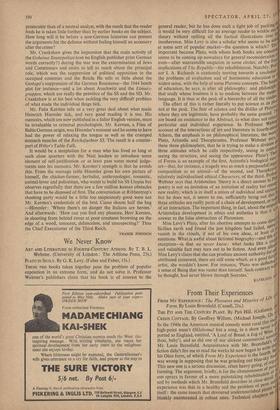 THESE two books taken together pose the problem of popular exposition in an extreme form, and do not solve it. Professor Webster's publishers claim that his book is of interest to the SPECTATOR, APRIL 27. j° general reader, but he has done such a tight job of packing tbl it would be very difficult for an average reader to winkle out theory without spilling all the factual illustrations into n incoherence. Miss Levy is also a scholar who seems to be ail!, at some sort of popular market—the question is which? IV important because Plato, with whom both books are concern seems to be coming up nowadays for general reconsideration even—after warrantable suspicion in some circles, of the Fos, implications of The Republic—for rehabilitation. Notably, pro t., I. A. Richards is cautiously moving towards a resolution the problems of evaluation and of humanistic education is widest sense, with the help of some Platonic concepts. The Will of education, he says, is after all philosophy : and philosophy'; that study whose business it is to mediate between the modes language. It is thus at the peak of a hierarchy of all the studies' The effect of this is rather literally to put science in its P18.4 not at the peak. The fear of science and the dislike of Plator where they are legitimate, have probably the same ground. , are based on resistance to the Abstract, to what does not relate'' particular and individual experience. In Professor Webs account of the interactions of art and literature in fourth-On/4i Athens, the emphasis is on philosophical literature, the Plato, Aristotle and Theophrastus. Professor Webster saYs!olo these three philosophers, that he is trying to make a division three attitudes which he calls respectively, seeing in contr; seeing the structure, and seeing the appearance. Plato's Thi of Forms is an example of the first, Aristotle's biological vied. 00 art—that, for instance, a tragedy was as much a purposeful orgto composition as an animal—of the second, and Theophrts0 relatively individualised ethical Characters, of the third. Pr°,;°,40 Webster says that Aristotelian 'theory is a direct answer to le poetry is not an imitation of an imitation of reality but creardi new reality, which is in itself a union of individual and but he does not, it seems to me, sufficiently bring out triaa`tof three attitudes are really parts of a chain of development, or r.rid of an interaction. The important thing, in fact, about the Aristotelian development in ethics and aesthetics is that It ' answer to the false abstraction of Platonism.

Miss Levy's Plato, after his abortive attempts to come d - Sicilian earth and found the just kingdom had failed, see !'e he vanish in the clouds, if not of his own ideas, at least 01-ispo emotions. What is awful about fictional biography—and this or exception—is that we never know: what looks like a 0'i00 and valuable fact may turn out to be fiction. And even alle4 Miss Levy's'claim that she can produce ancient authority fertIjoil attributed statement, there are still some which, as a good fie dbi artist, she wouldn't know. For instance, 'Plato was defleiod, a sense of Being that was vaster than himself. Such contrary w he thought, had never blown through. Socrates.' ,sr T4/ff KATIILEb,