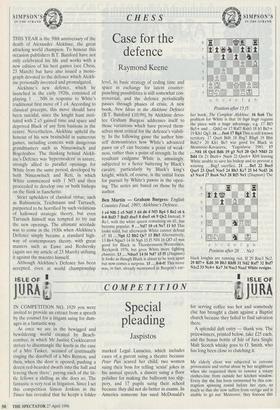 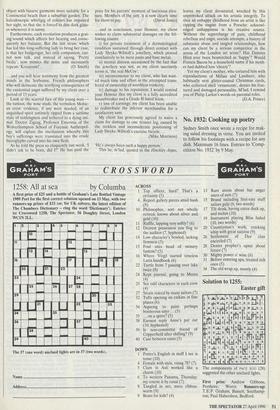 IN COMPETITION NO. 1929 you were invited to provide an extract from a speech by the counsel for a litigant suing for dam- ages in a fantastic way.

At once we are in the bewigged and bewildering world created by Beach- comber, in which Mr Justice Cocklecarrot strives to disentangle the knots in the case of a Mrs Tasker, 'accused of continually ringing the doorbell of a Mrs Renton, and then, when the door is opened, pushing a dozen red-bearded dwarfs into the hall and leaving them there', paying each of the lit- tle fellows a shilling as she does so. The fantastic is very real in litigation. Since I set this competition Simon Jenkins in the Times has revealed that he keeps a folder

marked Legal Lunacies, which includes cases of a parent suing a theatre because Peter Pan scared her child, two women suing their boss for telling 'sexist' jokes in his annual speech, a dancer suing a floor polisher for making the ballroom too slip- pery, and 17 pupils suing their school because they did not do better in exams. In America someone has sued McDonald's for serving coffee too hot and somebody else has brought a claim against a Baptist church because they failed to find salvation there.

A splendid daft entry — thank you. The prizewinners, printed below, take £25 each, and the bonus bottle of Isle of Jura Single Malt Scotch whisky goes to 0. Smith, who has long been close to clutching it.

My elderly client was subjected to extreme provocation and verbal abuse by her neighbours when she requested them to remove a rotary clothes-line from outside her kitchen window. Every day she has been tormented by this con- traption spinning round before her eyes, so much so that she now suffers from vertigo and is unable to go out. Moreover, they festoon this

object with bizarre garments more suitable for a Continental beach than a suburban garden. The kaleidoscopic whirligig of colours has impaired her sight, so that she is forced to don dark glass- es whenever it is sunny.

Furthermore, each revolution produces a grat- ing sound which affects her hearing and conse- quently her balance. But the last straw, which has led this long-suffering lady to bring her case, is that her budgerigar, her only companion, can- not now talk, and instead of saying, 'Pretty birdie', now mimics the noise and incessantly repeats `Kraayouw1'. (0. Smith) ... and you will hear testimony from the greatest minds in the Sorhonne, French philosophers who will delineate the terrifying consequences of the existential angst suffered by my client over a period of 15 years.

Look at the scarred face of this young man the tattoos, the nose studs, the vermilion Mohic- an crest: evidence, if any were needed, of an anguished spirit untimely ripped from a sublime state of nothingness and tethered to a dying ani- mal. Doctor Zigzag, Professor Emeritus of the Wolverhampton School of Forensic Anthropol- ogy, will explain the mechanism whereby this boy's sufferings were translated into the crude hieroglyphs carved into his own flesh. As he told the press so eloquently last week, 'I didn't ask to he horn, did I?' He has paid the price for his parents' moment of lascivious plea- sure. Members of the jury, it is now clearly time for them to pay. (David Jones) ... and in conclusion, your Honour, my client wishes to claim substantial damages on the fol- lowing counts: i) for private treatment of a dermatological condition sustained through direct contact with Lady Shryke-Wibtoft's jewellery, which proved conclusively to be mere paste and base metal; ii) mental distress occasioned by the fact that the jewellery was not, as my client succinctly terms it, 'the real McCoy'; iii) inconvenience to my client, who has wast- ed much time and effort in the attempted trans- ferral of ownership of worthless trinketry; iv) damage to his reputation: I would remind your Honour that my client is a fully accredited housebreaker and a Grade II listed felon; v) loss of earnings: my client has been unable to redistribute the inferior merchandise for a satisfactory sum.

My client has generously agreed to waive a claim for damage to one trouser leg, caused by the reckless and inconsiderate positioning of Lady Shryke-Wibtoft's exercise bicycle....

(Mike Morrison) `He's always been such a happy person.'

This lie, m'lud, quoted in the Hinckley Argus,

leaves my client devastated, wrecked by this unprovoked attack on his artistic integrity. To slice an unhappy childhood from an artist is like ripping the engine from a Porsche: acknowl- edged unhappiness is his creative source. Without the supercharge of pain, childhood rebellion and angst, suicide attempts, a history of substance abuse and tangled relationships, how can my client be a serious competitor in the arena of the London art scene? Has Damien Hirst ever been besmirched as 'happy'? Would Francis Bacon be a household name if his moth- er had dubbed him 'cheery'?

Yet my client's mother, who tortured him with reproductions of Millais and Landseer, who habitually sent glitter-coated Christmas cards, who collected shell 'ornaments', denies his frac- tured and damaged personality. M'lud, I remind you of Philip Larkin's words on parental roles.