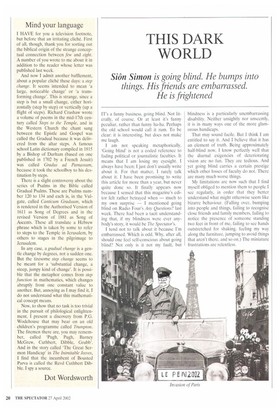 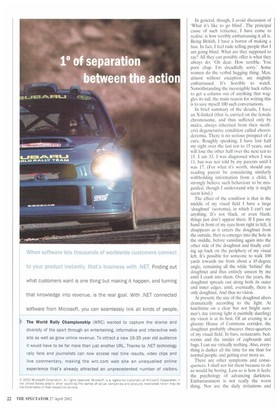 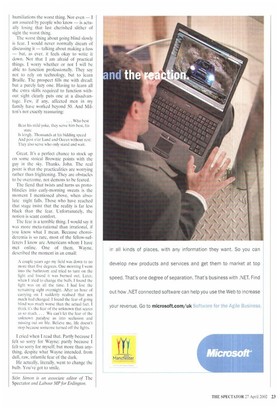 Sion Simon is going blind. He bumps into things. His friends are embarrassed.

IT's a funny business, going blind. Not literally, of course. Or at least it's funny peculiar, rather than funny ha-ha. Perhaps the old school would call it rum. To be clear: it is interesting, but does not make me laugh.

am not speaking metaphorically. 'Going blind' is not a coded reference to fading political or journalistic faculties. It means that I am losing my eyesight. I always have been; I just don't usually write about it. For that matter, I rarely talk about it. I have been promising to write this article for more than a year, but never quite done so. It finally appears now because I sensed that this magazine's editor felt rather betrayed when — much to my own surprise — I mentioned going blind on Radio Four's Any Questions? last week. There had been a tacit understanding that, if my blindness were ever anybody's story, it would be The Spectator's.

1 tend not to talk about it because I'm embarrassed. Which is odd. Why, after all, should one feel self-conscious about going blind? Not only is it not my fault, hut blindness is a particularly unembarrassing disability. Neither unsightly nor unseemly, it is in many ways one of the more glamorous handicaps.

That may sound facile. But I think I am entitled to say it. And I believe that it has an element of truth. Being approximately half-blind now, I know perfectly well that the diurnal exigencies of deteriorating vision are no fun. They are tedious. And yet going blind carries a certain prestige which other losses of faculty do not. There are many much worse things.

My limitations are now such that I find myself obliged to mention them to people I see regularly, in order that they better understand what might otherwise seem like bizarre behaviour. (Falling over, bumping into people and things, failing to recognise close friends and family members, failing to notice the presence of someone standing two feet in front of me, failing to see hands outstretched for shaking, feeling my way along the furniture, jumping to avoid things that aren't there, and so on.) The miniature frustrations are relentless. In general. though, I avoid discussion of 'What it's like to go blind'. The principal cause of such reticence, I have come to realise, is how terribly embarrassing it all is. Being British, I have a horror of making a fuss, In fact, I feel rude telling people that I am going blind. What are they supposed to say? All they can possibly offer is what they always do: 'Oh dear, How terrible. You poor chap. I'm dreadfully sorry,' Some women do the verbal hugging thing. Men, almost without exception, are mightily embarrassed. It's horrible to watch. Notwithstanding the incorrigible hack reflex to get a column out of anything that waggles its tail, the main reason for writing this is to save myself 100 such conversations.

In brief summary of the details, I have an X-linked (that is, carried on the female chromosome, and thus suffered only by males, always inherited from their mothers) degenerative condition called choroideremia. There is no serious prospect of a cure. Roughly speaking, I have lost half my sight over the last ten to 15 years, and will lose the other half over the next ten to 15. I am 33. I was diagnosed when I was 11, but was not told by my parents until I was 17. (For what it's worth, should any reading parent be considering similarly withholding information from a child, I strongly believe such behaviour to be misguided, though I understand why it might seem kind.)

The effect of the condition is that in the middle of my visual field I have a large 'doughnut' (scotoma), in which I can't see anything. It's not black, or even blank; things just don't appear there. If! pass my hand in front of my eyes from right to left, it disappears as it enters the doughnut from the outside, then re-emerges into the hole in the middle, before vanishing again into the other side of the doughnut and finally ending up back on the periphery of my visual left. It's possible for someone to walk 100 yards towards me from about a 45-degree angle, remaining all the while 'behind' the doughnut and thus entirely unseen by me until I crash into them. Over the years, the doughnut spreads out along both its outer and inner edges, until, eventually, there is only doughnut. And thus no vision.

At present, the size of the doughnut alters dramatically according to the light. At lunchtime on a clear but not bright summer's day (strong light is painfully dazzling) my vision is at its best. Of an evening in a gloomy House of Commons corridor, the doughnut probably obscures three-quarters of my visual field. In bars, restaurants, bedrooms and the insides of cupboards and bags, I can see virtually nothing. Also, everything is darker all the time for me than for normal people, and getting ever more so.

There are other symptoms and consequences. I shall not list them because to do so would be boring. Less so is how it feels: the psychology of advancing darkness. Embarrassment is not really the worst thing. Nor are the daily irritations and

The worst thing about going blind slowly is fear. I would never normally dream of discussing it — talking about making a fuss — but, as ever, it feels okay to write it down. Not that I am afraid of practical things. I worry whether or not I will be able to function professionally. They say not to rely on technology, but to learn Braille. The prospect fills me with dread; but a purely lazy one. Having to learn all the extra skills required to function without sight clearly puts one at a disadvantage. Few, if any, affected men in my family have worked beyond 50. And Milton's not exactly reassuring:

• • . Who best Bear his mild yoke, they serve him best, his state Is kingl■.. Thousands at his bidding speed And post o'er Land and Ocean without rest: They also serve who only stand and wait.

Great. It's a perfect chance to stock up on some stoical Brownie points with the guy in the sky. Thanks, John. The real point is that the practicalities are worrying rather than frightening. They are obstacles to be overcome, not demons to be feared.

The fiend that twists and turns us protoblindies into early-morning sweats is the moment I mentioned above, when absolute night falls. Those who have reached that stage insist that the reality is far less black than the fear. Unfortunately, the notion is scant comfort.

The fear is a terrible thing. I would say it was more meta-rational than irrational, if you know what I mean. Because choroideremia is so rare, most of the fellow-sufferers I know are Americans whom I have met online. One of them, Wayne, described the moment in an email:

A couple years ago my field was down to no more than five degrees. One morning I went into the bathroom and tried to turn on the light and found it was burned out. Later, when I tried to change the bulb, I found the light was on all the time. I had lost the remaining sight overnight. After an hour of carrying on I suddenly realised that not much had changed. I found the fear of going blind was much worse than the actual fact. I think its the fear of the unknown that scares us so much.... We can't let the fear of the unknown paralyse us into seclusion and missing out on life. Believe me, life doesn't stop because someone turned off the lights.

He actually, literally, went to change the bulb. You've got to smile.

Sion Simon is an associate editor of The Spectator and Labour MP for Erdington.