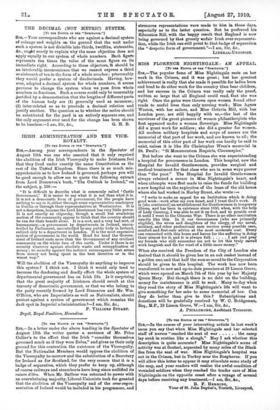 [To TEl EDITOR OF THE SP1CTITOR.1

Sra,—The popular fame of Miss Nightingale rests on her work in the Crimea, and it was great ; but her greatest achievement is really that she made it possible for ladies born and bred to do other work for the country than bear children, and her success in the Crimea was really only the proof, written so large that all England could read, that she was right. Once the gates were thrown open women found other roads to useful lives than only nursing work ; Miss Agnes Weston, with her sailors, and Miss Octavia Hill, with her London poor, are still happily with us,—the last of the survivors of the great pioneers of women philanthropists who first appeared under a woman Sovereign. Miss Nightingale did a great work for soldiers ; she did a greater for women.

Bat before she went to the Crimea she was superintending a hospital for governesses in London. This hospital, now the Hospital for Invalid Gentlewomen, provides surgical and medical treatment for that class who are in some ways poorer than "the poor." The Hospital for Invalid Gentlewomen always retained a corner in Miss Nightingale's heart, and when attempts were ftrst made to raise the funds for building a new hospital on the expiration of the lease of the old house where she had worked in Harley Street, she wrote

I write to make an appeal for an Institution which Is doing good work—work after my own heart, and I trust God's work. It is [she continued] an establishment for Gentlewomen in temporary illness, and has been in existence since 1850, when, with the help of Lady Canning, I was able to set it on foot, and to preside over it until I went to the Crimean War. There is no other institution exactly like this. In it our Governesses (who are primarily eligible), the wives and daughters of the clergy, of our naval, military, and other professional men receive every possible care, comfort and first-rate advice at the most moderate cost. Every one connected with this home and haven for the suffering is doing

their utmost for it, and it is always full I ask and pray my friends who still remember me not to let this truly sacred work languish and die for want of a little more money."

When she received the Freedom of the City of London she desired that it should be given her in an oak casket instead of a golden one; and that half the sum so saved to the Corporation should be given to this hospital. The work has now been transferred to new and up-to-date premises at 19 Lisson Grove,

which were opened on March 7th of this year by her Majesty Queen Mary. But though there is no debt on the building, money for maintenance is still to seek. Many to-day when they read the story of Miss Nightingale's life will want to give something for her sake to some memorial of her. Can they do better than give to this ? Subscriptions and donations will be gratefully received by W. C. Biidgeman, Esq., M.P., 19 Lisson. Grove, W.—I am, Sir, &c., A. Parraaraonz, Asskstant Treasurer.