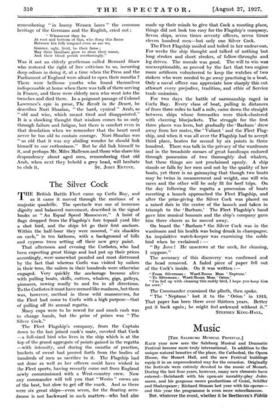 THE British Battle Fleet came up Corfu Bay, and as it came it moved through the motions of a majestic quadrille. The spectacle was one of immense dignity and balanced movement, described in the signal books as " An Equal Speed Manoeuvre." A hoist of flags dropped from the Flagship's fore topsail yard like a shot bird, and the ships let go their first anchors. Within the half-hour they were moored, " six shackles on each," in ten fathoms, with a background of hills and cypress trees setting off their new grey paint.

That afternoon and evening the Corfiotes, who had been expecting great things and had put up their prices accordingly, were somewhat puzzled and most distressed by the fact that whereas Corfu was visited by sailors in their tens, the sailors in their hundreds were otherwise engaged. Very quickly the anchorage became alive with pulling boats, skiffs, cutters, whalers, gigs, galleys, pinnaces, rowing madly to and fro in all directions. To the Corfiotes it must have seemed like madness, but there was, however, method in these wild manoeuvres, for the Fleet had come to Corfu with a high purpose—that of pulling off its annual regatta.

Many cups were to be rowed for and much cash was to change hands, but the prize of prizes was " The Silver Cock."

The Fleet Flagship's company, from the Captain down to the last joined cook's mate, coveted that. Cock —a full-sized bird who lives in the ship which is at the top of the grand aggregate of points gained in the regatta with intensity, and during the months of practice, buckets of sweat had poured forth from the bodies of hundreds of men as sacrifice to it. The Flagship had not done as well as her officers could have wished in the Fleet sports, having recently come out from England newly commissioned with a West-country crew. Now any commander will tell you that " Westo " crews are of the best, but slow to get off the mark. And as there were six great ships—even seven, for the floating aero- drome is not backward in such matters—who had also made up their minds to give that Cock a roosting place; things did not look too easy for the Flagship's company. Seven ships, seven times seventy officers, seven times eleven hundred men—but only one Silver Cock.

The Fleet Flagship moiled and toiled in her endeavour. For weeks the ship thought and talked of nothing but long strokes and short strokes, of follow-throughs and leg drives. The morale was good. The will to win was unexceptionable, as proved by the fact that two engine room artificers volunteered to keep the watches of two stokers who were needed to go away practising in a boat. Only a naval officer can appreciate how sharply this cut athwart every prejudice, tradition, and ethic of Service trade unionism.

For two days the battle of oarsmanship raged in Corfu Bay. Every class of boat, pulling in distances of from three miles to half a mile, came down the straight between ships whose forecastles were thick-clustered with cheering bluejackets. The struggle for the first three places was keen, but gradually the Barham' drew away from her mates, the Valiant ' and the Fleet Flag- ship, and when it was all over the Flagship had to accept third place, beaten for second by six points in three hundred. There was talk in the privacy of the wardroom and in the broadside messes of great handicaps endured through possession of two thoroughly dud whalers, but these things are not proclaimed openly. A ship stands or falls by her men and not by the quality of her boats, yet there is no gainsaying that though two boats may be twins in measurement and weight, one will win races and the other will be only fit for beef trips. On the day following the, regatta a procession of boats escorting a launch approached the Fleet Flagship, and after the prize-giving the Silver Cock was placed on a raised dais in the centre of the launch and taken in triumph to the Barham.' The Fleet Flagship's band gave him musical honours and the ship's company gave him three cheers as he moved away.

On board the Barham the Silver Cock was in the wardroom and his health was being drunk in champagne. An inquisitive watch-keeper was examining the noble bird when he exclaimed : — " By Jove ! He unscrews at the neck, for cleaning, I suppose."

The accuracy of this discovery was confirmed and the head removed. A faded piece of paper fell out of the Cock's inside. On it was written :— "From Silverman : Ward-Room Mess Neptune.' "To Silverman: Ward-Room Mess "I'm fed up with cleaning-this ruddy bird, I hope you keep him for ever."

The Commander examined the plinth, then spoke.

" The Neptune ' lost it to the Orion ' in 1913. That paper has been there over thirteen years. Better put it back again; he might feel awkward without it."