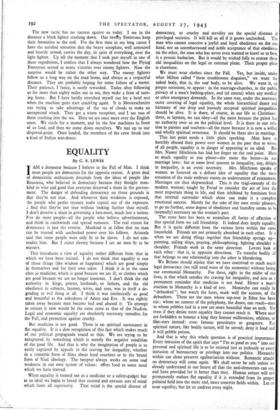 IAM a democrat because I believe in the Fall of Man. I think most people are democrats for the opposite reason. A great deal of democratic enthusiasm descends from the ideas of people like Rousseau, who believed in democracy because they thought man- kind so wise and good that everyone deserved a share in the govern- ment. The danger of defending democracy on those grounds is that they're not true. And whenever their weakness is exposed, the people who prefer tyranny make capital out of the exposure.

find that they're not true without looking further than myself. 1 don't deserve a share in governing a hen-roost, much less a nation. Ivor do most people—all the people who believe advertisements, and think in catchwords and spread rumours. The real reason for democracy is just th reverse. Mankind is so fallen that no man can be trusted with unchecked power over his fellows. Aristotle said that some people were only fit to be slaves. I do not con- tradict him. But I reject slavery because I see no men fit to be masters.

This introduces a view of equality rather different from that in which we have been trained. I do not think that equality is one of those things (like wisdom or happiness) which are good simply in themselves and for their own sakes. I think it is in the same class as medicine, which is good because we are ill, or clothes which are good because we are no longer innocent. I don't think the old authority in kings, priests, husbands, or fathers, and the old obedience in subjects, laymen, wives, and sons, was in itself a de- grading or evil thing at all. I think it was intrinsically as good and beautiful as the nakedness of Adam and Eve. . It was rightly taken away because men became bad and abused it. To attempt to restore it now would be the same error as that of the Nudists. Legal and economic equality are absolutely necessary remedies for the Fall, and protection against cruelty.

But medicine is not good. There is no spiritual sustenance in flat equality. It is a dim recognition of this fact which makes much of our political propaganda sound so thin. We are trying to be enraptured by something which is merely the negative condition of the good life. And that is why the imagination of people is so easily captured by appeals to the craving for inequality, whether in a romantic form of films about loyal courtiers or in the brutal form of Nazi ideology. The tempter always works on some real weakness in our own system of values: offers food to some need which we have starved.

which hates all superiority. That mind is the special disease of democracy, as cruelty and servility are the special diseases of privileged societies. It 'will kill us all if it grows unchecked. The man who cannot conceive a joyful and loyal obedience on the one hand, nor an unembarrassed and noble acceptance of that obedience on the other, the man who has never even wanted to kneel or to bow, is a prosaic barbarian. But it would be wicked folly to restore these old inequalities on the legal or external plane. Their proper place is elsewhere.

We must wear clothes since the Fall. Yes, but inside, under what Milton called " these troublesome disguises," we want the naked body, that is, the real body, to be alive. We want it, on proper occasions, to appear: in the marriage-chamber, in the public privacy of a men's bathing-place, and (of course) when any medical or other emergency demands. In the same way, under the necessary outer covering of legal equality, the whole hierarchical dance and harmony of our deep and joyously accepted spiritual inequalities should be alive. It is there, of course, in our life as Christians: there, as laymen, we can obey—all the more because the priest has no authority over us on the political level. It is there in our rela- tion to parents and teachers—all the more because it is now a willed and wholly spiritual reverence. It should be there also in marriage.

This last point needs a little plain speaking. Men have so horribly abused their power over women in the past that to wives, of all people, equality is in danger of appearing as an ideal. But Mrs. Naomi Mitchison has laid her finger on the real point. Have as much equality as' you please—the more the better—in our marriage laws: but at some level consent to inequality, nay, delight

The error here has been to assimilate all forms of affection to that special form we call friendship. It indeed does imply equality. But it is quite different from the various loves within the same household. Friends are not primarily absorbed in each other. It is when we are doing tliings together that friendship springs up— painting, sailing ships, praying, philosophising, fighting shoulder to shoulder. Friends work in the same direction. Lovers look at each other: that is, in opposite directions. To transfer bodily all that belongs to one relationship into the other is blundering.

We Britons should rejoice that we have contrived to reach much legal democracy (we still need more of the economic) without losing our ceremonial Monarchy. For there, right in the midst of our lives, is that which satisfies the craving for inequality, and acts as a permanent reminder that medicine is not food. Hence a man's reaction to Monarchy is a kind of test. Monarchy can easily be " debunked "; but watch the faces, mark well the accents, of the debunkers. These are the men whose tap-root in Eden has been cut: whom no rumour of the polyphony, the dance, can reach—men to whom pebbles laid in a row are more beautiful than an arch. Yet even if they desire mere equality they cannot reach it. Where men are forbidden to honour a king they honour millionaires, athletes, or film-stars instead: even famous prostitutes or gangsters. Fur spiritual nature, like bodily nature, will be served; deny it food and it will gobble poison.

And that is why this whole question is of practical importance. Every intrusion of the spirit that says " I'm as good as you " into our personal and spiritual life is to be resisted just as jealously as every intrusion of bureaucracy or privilege into our politics. Hierarchy within can alone preserve egalitarianism without. Romantic attacks on democracy will come again. We shall never be safe unless we already understand in our hearts all that the anti-democrats can say, and have provided for it better than they. Human nature will not permanently endure flat equality if it is extended from its proper political field into the more real, more concrete fields within. Let us wear equality; but let us undress every night.