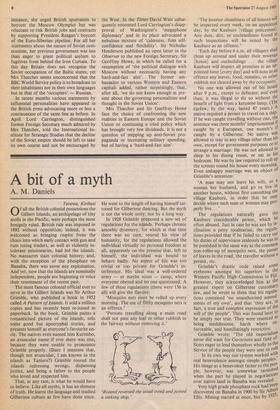 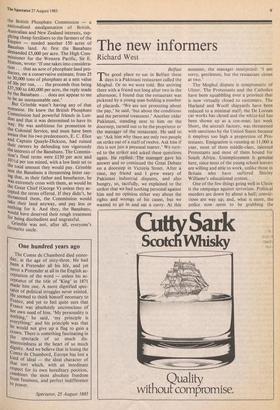 A bit of a myth

Of all the British colonial possessions the Gilbert Islands, an archipelago of tiny atolls in the Pacific, were perhaps the most benignly ruled. British rule was imposed in 1892 without opposition; indeed, it was rwelcomed as bringing respite from the chaos into which early contact with gun and rum toting traders, as well as violently in- tolerant missionaries, had led the islands. No massacres stain colonial history; and, with the exception of the phosphate on Banaba, there was never any exploitation. And yet, now that the islands are nominally independent, people are beginning to voice their resentment of the recent past.

The most famous colonial official ever to serve in the Gilbert Islands was Sir Arthur Grimble, who published a book in 1952 called A Pattern of Islands. It sold a million copies and has recently been re-issued in paperback. In the book, Grimble paints a romanticised picture of the islands, tells some good but apocryphal stories, and presents himself as everyone's favourite un- cle. The natives even named him Kurimbo, an avuncular name if ever there was one, because they were unable to pronounce Grimble properly. (Dare I mention that, though not avuncular, I am known in the islands as Taniera?) Grimble toured the islands redressing wrongs, dispensing justice, and being a father to the people who loved and respected him.

That, at any rate, is what he would have us believe. Like all myths, it has an element of truth. He learnt the language and studied Gilbertese culture as few have done since. He went to the length of having himself tat- tooed for Gilbertese dancing. But the myth is not the whole story: not by a long way.

In 1928 Grimble proposed a new set of regulations for the islands. Perhaps chronic amoebic dysentery, for which at that time there was no cure, soured his view of humanity, for the regulations allowed the individual virtually no personal freedom at all, apparently on the premise that, left to himself, the individual was bound to behave badly. No aspect of life was too trivial or too private for Grimble's in- terference. His ideal was a well-ordered army — or maybe scout — camp, where everyone obeyed and no one questioned. A few of these regulations (there were 136 in all) will give the flavour; `Mosquito nets must be rolled up every morning. The use of filthy mosquito nets is an offence.'

`Persons travelling along a main road shall not pass any leaf or other rubbish in the fairway without removing it.'

'Roland reversed the usual trend and joined a sinking ship.'

'The interior cleanliness of all houses will be inspected every week, on an appointed day, by the Kaubure [village policeman], Any dust, dirt, or uncleanliness found at such inspections will be noted by the Kaubure as an offence.' 'Each day before 6 a.m. all villagers shall clean up around and under their mwengs [house] and outbuildings ... the village Kaubure will inspect all premises at an ap- pointed hour [every day] and will note as an offence any leaves, food, remains, or other rubbish not cleared away by the occupants., No one was allowed out of his house after 9 p.m., except to defecate; and even then, it was illegal to do so without the benefit of light from a kerosene lamp. (The Curf6w, by the way, lasted 47 years.) A native required a permit to travel on a shin. If he was caught travelling without one, the sentence was three months' imprisonment if caught by a European, one month's if caught by a Gilbertese. No native was allowed to stay in any village other than his own, except for government purposes or to arrange a marriage. He was not allowed to sleep in his dining room, or eat in his bedroom. He was by law required to roll UP the screens round his house every morning. Even unhappy marriage was an object of Grimble's attention:

'A man may not leave his wife, or woman her husband, and go to live in another house, without first consulting the village Kaubure, in order that he may decide where such man or woman may Pro' perly live ... '

'The regulations naturally gave the Kaubure considerable power, which he often abused. Just in case he was not by

in- clination a petty totalitarian, the regula- tions provided that if he failed to carry out his duties of supervision zealously he was to be punished in the same way as the common non-roller-up of mosquito nets, the passer of leaves in the road, the traveller without a permit, etc.

Grimble's drastic code raised some eyebrows amongst his superiors in the Western Pacific Hight Commission in Fiji. However, they acknowledged him as the greatest expert on Gilbertese customary law, and he wrote to them that his regula- tions contained `no unauthorised amend- ments of my own', and that 'they are, in fact, a true and complete expression of the will of the people'. This was found later to be simply not true. They were resented as being meddlesome, harsh where en- forceable, and humiliatingly restrictive. Grimble wrote: 'The old imperialism never did want for Governors and field of- ficers eager to lend themselves wholly to the Service of the people they were sent to rule ... In its own way our system worked with real benevolence amongst simple peoples. His image as a benevolent father to the PO; ple, however, was somewhat tarnished when the part he played in negotiations over native land in Banaba was revealed. Very high grade phosphate rock had been discovered on Banaba in 1900 by Sir Albert Ellis. Mining started at once, but by 1925' the British Phosphate Commission — a nationalised amalgamation of British, Australian and New Zealand interests, sup- Plying cheap fertilisers to the farmers of the Empire — needed another 150 acres of Banaban land. At first the Banabans demanded £5,000 per acre. The High Com- missioner for the Western Pacific, Sir E. H. utson, wrote: 'If one takes into considera tion that an acre of phosphate land pro- ducers, on a conservative estimate, from 25 to 30,000 tons of phosphate at a nett value of 30s per ton, . . . the proceeds thus being 07,500 to £40,000 per acre, the reply made by the Banabans ... does not appear to me to be an unreasonable one.'

But Grimble wasn't having any of that nonsense. He knew the British Phosphate Commission had powerful friends in Lon- don and that it was determined to have its way. He was ambitious for promotion in the Colonial Service, and must have been aware that his two predecessors, E. C. Eliot and Captain Quayle-Dickson, had ruined their careers by defending too vigorously the interests of the Banabans. The Commis- sion's final terms were £150 per acre and 101/2d per ton mined, with a low limit set to the total amount they would pay. Grimble Sent the Banabans a threatening letter say- ing that, as their father and benefactor, he was extremely cross with them, as would be the Great Chief (George V) unless they ac- cepted the terms offered. If they didn't, he threatened them, the Commission would take their land anyway, and pay less or nothing for it. And they, the Banabans, would have deserved their rough treatment for being disobedient and ungrateful. Grimble was not, after all, everyone's favourite uncle.